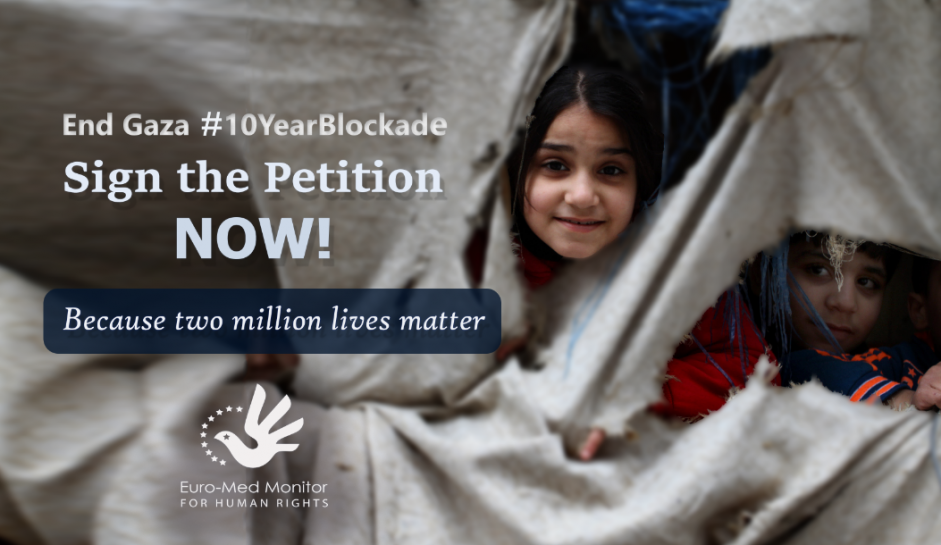 Geneva - Israel continues to control entry and exit into Gaza from its territory, as well as the Strip’s airspace and sea. Likewise, it controls Gaza’s population registry, telecommunication networks and many other aspects of its daily life and infrastructure—making it nearly impossible for residents to support themselves and build a productive future. In addition, since 2008, the state of Israel has launched three military offensives against the Gaza Strip, devastating its already-fragile infrastructure and exacerbating the humanitarian crisis created by a strangling blockade.

Nearly two million Palestinians in Gaza have been mired in a miserable limbo for 10 years now—unable to make a living by freely fishing, farming or trading goods, or to leave for study abroad, medical care, work or family visits.

Israel imposed a blockade 10 years ago, in response to a democratic election in which the Hamas party won a majority of parliamentary seats.

43% are unemployed (62% among youth and women—the highest in the world).

40% fall below the poverty line.

A few other sobering facts:

Exports are fewer than 4% of their pre-blockade levels.

The manufacturing sector has shrunk by 60%.

The waiting time for some surgeries at Gaza’s largest
hospital is up to 18 months.

What’s the quickest way to bring some lasting freedom to Gaza? A seaport.

The Palestinians want the blockade to be lifted, with unrestricted travel and trade through the Erez (Israel) and Rafah (Egypt) crossings. But of those countries tend to abrogate any agreements at any bump in the road. Thus, the only solution that has a chance for offering reliable independence for the people of Gaza is its own seaport. This would provide Palestinians in Gaza with a secure and dignified passageway to and from the outside world, free from dependence on the usually absent goodwill of Israel and Egypt.

A detailed plan already exists for implementing such a project (visit here), and both the French and Dutch governments had committed to funds and other resources to make it happen—until Israel refused to allow construction materials and other needed goods in.

“The 10th year of the blockade of Gaza is now complete” says Ramy Abdu, chair of Euro-Med Monitor. “It is an ideal time to remind the world of the consequences, as well as to call on the EU to take specific action -- the development of an independent Gaza seaport”.

As part of this 10-year campaign, The Euro-Mediterranean Human Rights Monitor has launched an Avaaz petition targeted at Federica Mogherinithe High Representative of the European Union for Foreign Affairs and Security Policy and Vice-President of the European Commission in the Juncker Commission.