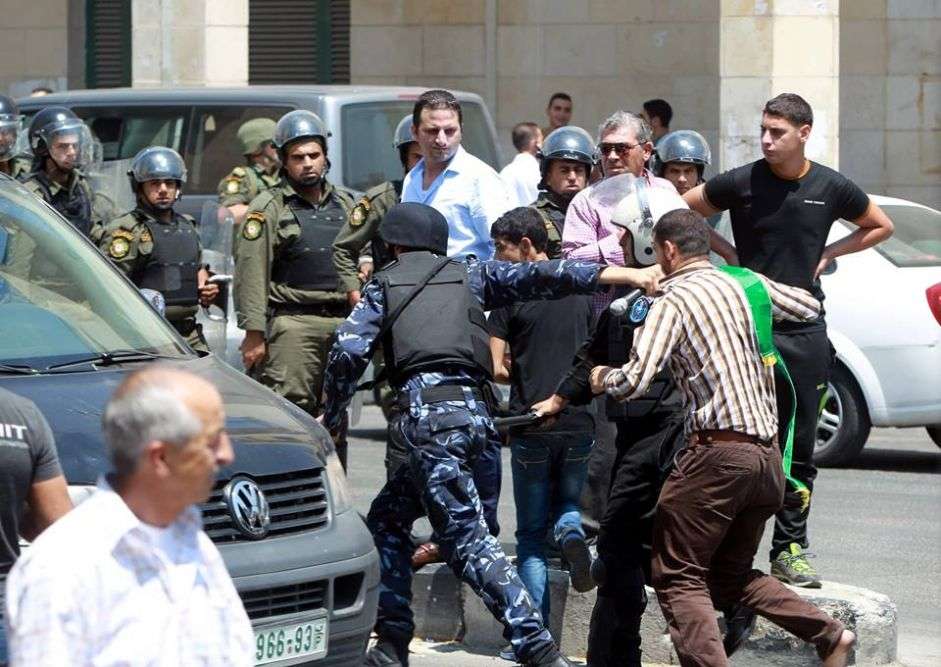 Geneva -  The Palestinian security services in the West Bank and the Gaza Strip were responsible for 2,578 arbitrary detentions and summons to appear in 2015, documents the Euro-Mediterranean Monitor for Human Rights in a new report—including 228 that resulted in torture.

"Many people are reluctant to talk about human rights violations by Palestinian security forces because it will ‘deepen the division’ between the two main factions, Hamas and Fatah," says Sandra Owen, a political adviser to the Euro-Med Monitor. "However, the violations themselves are a significant contributor to the division. Palestinians have too many external oppressors to be oppressors of their own people, no matter who does it.”

The Euro-Med Monitor report, "Strangulation Twice: the Oppressive Practices of Palestinian Security Services," documents 1,274 arbitrary detentions in the West Bank in 2015 and 1,089 summonses to appear in front of the police or “interior security.” Most of these actions by the Palestinian Authority targeted individuals affiliated with Hamas or who opposed PA policies. Among those arrested were about 35 journalists and human rights activists, 476 university students, and 67 teachers/professors.

The most serious violations practiced by the Palestinian security forces in the West Bank, according to Euro-Med Monitor's report, was the refusal to implement court rulings ordering the release or acquittal of detainees. In some cases, security forces continued detention for several days to months after a ruling. Twenty-seven percent of arrests in the West Bank lasted for a month or more.

During detention, 179 individuals reported not being shown an arrest warrant, confiscation of belongings and even beatings with sticks and solitary confinement. Medical reports confirmed the systematic practice of torture in Palestinian Authority jails in the West Bank.

In Gaza, 117 arbitrary detentions and 98 orders to appear were attributed last year to Hamas, which governs the Strip. Like their PA counterparts, the security forces primarily targeted political opponents. Among the detained were 23 journalists and human rights activists, 24 university students and five academics. Thirty-nine cases of torture were reported, including verbal and physical abuse, often after being charged with collaboration with Israel.

A practice that is becoming increasingly common across both governments is a crackdown on social media posts, primarily on Facebook. In the West Bank, 37 arrests and 24 summonses were based on Facebook posts, comments and even “likes” that were perceived to be critical of the Palestinian Authority—particularly its relationship and agreements with Israel. In Gaza, 11 arrests and 13 summonses were based on posts and actions on social media. Sometimes, individuals are required to sign a pledge not to talk about or criticize Hamas in their posts or comments. They are warned they will be summoned again if they violate the pledge.

"The number of human rights violations committed by PA authorities in the West Bank was significantly greater than those for which Hamas was responsible,” says Owens. “However, both organizations are guilty of censorship and oppression.”

In its report, Euro-Med Monitor demands that both the PA and Hamas issue a clear and binding resolution mandating freedom of expression and prohibiting all forms of abusive detention.