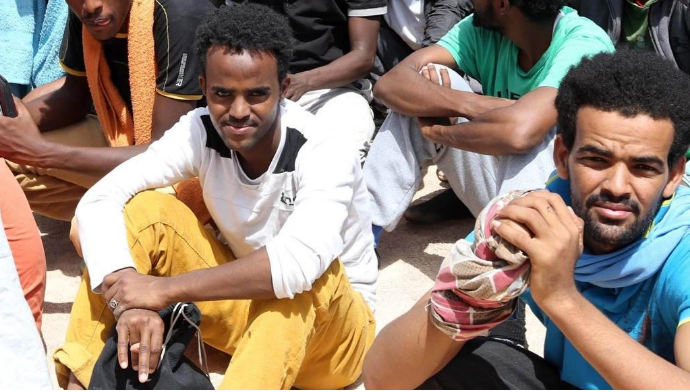 In an impoverished and violent neighborhood on the edge of Sebha in Libya's southern desert, 30-year-old Ibrahim from Burkina Faso is struggling to survive — and to move on.

He's stuck here, working at a laundry to make money, because he needs to save for the ride north over 400 miles of desert to Libya's coast, and a place on a boat to Italy. It's dangerous for migrants like him, who pass through here on the way from sub-Saharan Africa to what they hope is a better life in Europe.

Warring local tribes, and gangs preying on migrants, are a daily threat.

"All the time guns are turned against us to rob us," said Ibrahim, who would only give a first name, while gesturing towards a group of men also from Burkina Faso, gathered warily outside a dilapidated storefront. "Four months ago I was actually shot here by one man."

Last year, friends who had made it to Europe called Ibrahim at home and told him about how they were doing better there. So he left behind his wife, newborn baby, and work selling goods on the street, and invested $300 for the brutal desert trek with smugglers to reach Sebha. Ibrahim now needs the same amount to reach the coast at Tripoli, and up to $1,000 more to cross the Mediterranean Sea. That's a staggering sum for someone from Burkina Faso, where gross national income per capita is $700.

But a place on a crowded, often rickety boat is no guarantee of getting anywhere alive. Ibrahim will have about a one in 30 chance of drowning in the Mediterranean.

28,000 people have arrived to Italy from Libyan shores this year, according to the International Organization for Migration or IOM, but almost 1,000 have died trying. It's the deadliest crossing to Europe for migrants and refugees.

According to IOM head Othman Belbeisi, there are significantly more than the 142,000 migrants and refugees currently documented as being inside Libya. But with no effective government since dictator Muammar Ghadafi was overthrown in 2011, Libya's security environment has deteriorated drastically, and so has the capability to count those passing through the country.

At Sebha's overcrowded and chaotic hospital, up to 50 sick or injured sub-Saharans come in daily from the treacherous desert, fleeing war, insurgency, drought, joblessness, and poverty. Around the hospital, fighters from the city of Misrata stand guard against frequent and often deadly skirmishes between local militia.

"There are people from car accidents in the desert, cases of dehydration, gunshot wounds, and kidnappings," said Mahdi Mohamed Mahdi, the harried administrator in charge of the migrants' medical files. "There is a lot of torture from kidnappings," he sighed.

Not everybody makes it to the hospital alive. One of Mahdi's tasks is to identify bodies that arrive without passports, or unidentified people who die in hospital care. Many of the dead are buried in both Muslim and Christian graves, but there is a backlog of unidentified corpses in the hospital morgue. "We've had some bodies here for over a year, since last Ramadan," he said.

Upstairs in a hospital bed, Saedo, a 25-year old from Gambia, recuperated with his right leg in bandages. He said he jumped from a moving car, driven by a man he suspected was trying to abduct him. "He picked me up off the street for work. I begged him to stop when we headed towards the desert," he said. "I had to escape."

In the past five years armed groups have proliferated, capitalizing on Libya's porous borders, political crisis and security vacuum, and transforming the smuggling of human beings into a lucrative, and booming, business.

Tribal fights over control of the smuggling routes, with their south Libyan hubs in Sebha and Kufra, affect the region at large, spilling over the desert borders. In the southwest, Algeria has significantly tightened border security to contain Libya's violence. Because of this, and French military patrols on the lookout for terrorists along the border with Niger, smuggling routes in recent years have largely shifted — crossing into Libya from Niger's northeast corner, due south of Sebha.

Libyan authorities, such as they are, can't do much to stop it.

Mouktar Dabo, one young policeman manning a desolate and officially closed Libyan border post with Algeria, said they ignore the few people who do cross here illegally. "We can't do anything because we have no money," he said. "And it's very difficult to put people in jail with no support."

There is one government agency in Libya dealing with all this — the Department to Combat Illegal Migration — but only half of its 21 detention centers are now operational due to a lack of funds. Government policy now is to bus the migrants it detains along the coast to the south, and drop them over the border in Niger.

"We have no outside help, and don't have the means because of the wide area we have to control," explained Bashir Darwish, the operating head of Misrata's military presence in Sebha. Darwish and his men view their role in the area as a mediators between the tribes, and supporters of the rule of law. "To the north we're having capacity problems because we are focused on defeating the Islamic State, and in the south because of political instability."

The militants who have pledged allegiance to the Islamic State are another grave danger to the migrants, especially those who are Christians, like the Egyptians and Ethiopians whom the Libyan IS affiliate killed in grisly mass-beheading videos last year. Territory around Sirte is especially rife with IS jihadists.

However, humanitarian agencies fear more and more people will be forced to brave the dangers of a Libyan sea crossing, because of the European Union deal with Turkey earlier this year that blocked the passage of refugees and migrants into Greece.

Now EU states are preparing a similar agreement with Libya, to be approved by the incoming United Nations-backed Government of National Accord, or GNA, in Tripoli, for a more robust international presence policing smugglers and their business inside Libyan waters. The warships proposed as the muscle for this operation would not be Libyan — there is a barely functioning Libyan navy or coast guard — but from NATO.

"Rumors about a potential NATO involvement off Libya's coast [are] very worrying, [because of] what we have already experienced in the Aegean Sea a few months ago," said Stefano Argenziano, a humanitarian official from Doctors Without Borders, one of the few international medical charities currently treating refugees and migrants inside Libya, as well as on the Mediterranean.

"A policy based on deterrence will only shift the focus of routes elsewhere, which will be more dangerous and more traumatic than the old routes," warned Argenziano. "There is no alternative being offered to people who are putting their lives at stake crossing the desert and the sea. Deterrence will simply not work."

In Sebha, around the corner from the ramshackle laundry where Ibrahim from Burkina Faso works, a businessman, who people say is a middleman in the smuggling business, held court under his tent and described what he did.

"People arrive in very bad condition and I feel sorry for them," he scowled. "I feel responsible for them. After a series of communications they go off to relatives."

He, too, links the explosion in smuggling with the end of the oppressive regime that ruled Libya for 42 years.

"During Ghadafi's time there were many people afraid of this business," he said. "Now, the governments in Niger, in Chad, in Algeria — they are lying if they say they don't know how people get here. And at the Madama military base in Niger, the French know what is happening too."

"Only God can stop the smugglers," he laughed. "If you try and stop the business, they will kill you."