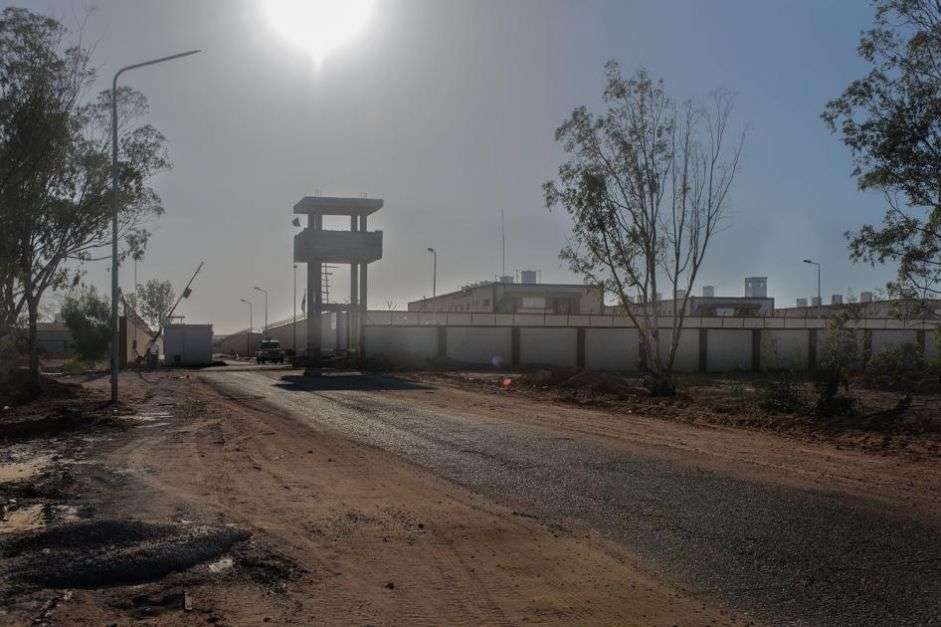 (Tunis) – Libyan authorities should ensure the safety of and urgently provide medical care for more than 120 women and children being held in a Misrata prison after recently fleeing fighting in Sirte, Human Rights Watch said today. The authorities should work with the United Nations and humanitarian agencies to find safe destinations for those detained and treat them for injuries, illness, and malnourishment.

An administrator at al-Jawiyyah prison told Human Rights Watch by telephone that most of the group detained there are women and children believed to be related to Islamic State, also known as ISIS, fighters who had been in Sirte before Libyan forces retook the area in December 2016. Some of the women were allegedly abducted by ISIS fighters, a second Libyan official said by phone, and news stories reported that ISIS fighters had sexually abused them. The prison administrator said that the prison does not have adequate medical care. Public hospitals in Misrata have refused to admit members of the group because of fears of stoking anger among the local population after about 700 fighters from Misrata were killed in the fighting.

“Libyan authorities should do everything possible to ensure that the women and children who fled Sirte do not suffer from any association they may have with ISIS fighters,” said Bill Van Esveld, senior children’s rights researcher at Human Rights Watch. “The authorities should urgently work with the UN and aid groups to get these civilians to a safe place where they can receive necessary medical care and other assistance.”

ISIS controlled the coastal town of Sirte from February 2015 until mid-December 2016, including its port, air base, main power station, and radio station, along with all local government offices and finances, creating the biggest ISIS stronghold outside of Iraq and Syria. Anti-ISIS fighters, mostly from Misrata, operating under the umbrella of Al Bunyan Al Marsoos (Solid Structure), captured the city after a six-month battle that killed hundreds of fighters on both sides. While in control of Sirte, ISIS established its own administration, an Islamic court, and an Islamic Police force. ISIS carried out public punishments of perceived collaborators and people they accused of apostasy, including lashings and executions.

Anti-ISIS forces, supported by US airstrikes, created safe corridors for civilians to flee from the fighting in Sirte, Misrata forces said in public statements. Anti-ISIS forces first sent women and children who fled Sirte to a former school building in Krarim, about 20 kilometers south of Misrata, which the forces used as a transit and interrogation center, and then transferred them to al-Jawiyyah prison, said the prison administrator, who received them.

Al-Jawiyyah was holding at least 120 women and children as young as a few months old as of December 5, but no suspected male ISIS fighters, the prison administrator said. UN officials in Libya, who had visited the prison four times since November, told Human Rights Watch by email on December 19 that the prison housed 123 civilians from Sirte – 35 women and 88 children, including 15 unaccompanied children.

None of the women and children have identification documents, the prison administrator said. Some of the youngest were born in territory controlled by ISIS, where their births were not registered, said the other Libyan official. Although the majority of the detainees are Libyans, others are from Tunisia, Iraq, Chad, Syria, Eritrea, and Niger, they said.

The prison administrator, who received the women and children fleeing Sirte at the prison, said that all of those being held from Sirte were the wives and children of ISIS fighters, except four Filipino medical staff who had been stranded in Sirte when ISIS took control.

Some of the “wives,” including non-Libyan women and girls, seem to have been captured by ISIS, the second Libyan official said, based on the women’s accounts. News articles reported that some of the women had been trafficked and sexually abused by ISIS.

An Al Jazeera report quoted a 25-year-old Eritrean woman, interviewed at the prison, who said ISIS fighters had kidnapped her in Sudan and that a fighter in Sirte had “locked me in a room and made of me what he wanted.” Another news report quoted a 16-year-old Eritrean girl at the prison who said prison authorities had denied her an abortion, despite her claim that ISIS fighters raped her and “sold [her] like an object.” Libyan authorities have held some of the women at the prison for months, according to the report. Human Rights Watch could not independently verify these claims.

The prison administrator and the other Libyan official separately told Human Rights Watch that the detainees received preliminary medical treatment at two field hospitals near Sirte immediately after they fled the city. However, some of the women and children had shrapnel and bullet wounds that needed urgent medical care, others needed treatment after suffering weeks of malnourishment and dehydration in Sirte, and some of the women were pregnant. The prison clinic is ill-suited to care for the children and pregnant women, and has no means to pay for outside medical care, the prison official said.

The Libyan authorities have an obligation to ensure the well-being and security of the women and children, but should not detain them on the basis of suspected relationships to ISIS fighters, Human Rights Watch said. They should provide them with medical care,including pre- and post-natal care, and access to childcare.

Libyan authorities should coordinate with UN agencies and independent humanitarian organizations to urgently get medical care for the detainees, and identify victims of forced marriage, sexual slavery, or other abuse by ISIS who require medical treatment and mental health services, Human Rights Watch said.

The UN mission in Libya should work with the Libyan authorities to ensure that the group members have safe places to go. Libya has no apparent procedures in place to identify and provide documentation to the women and children. The lack of documentation creates a risk of statelessness, and the suspicion of past association with ISIS fighters – whether voluntary or coerced – could lead some home countries of foreign women and children to refuse to repatriate them, or put them at risk of abusive interrogation and arbitrary detention upon return.

Libyan authorities and the UN refugee agency should identify safe, durable solutions for providing documentation to civilians fleeing ISIS-held areas. This could include a task force that collects and uses any existing identity papers, and contacts family members abroad. They should also seek to assure safe travel for foreign civilians, ensuring they are not repatriated if they would be at risk of persecution or torture, Human Rights Watch said.

“Libya, the UN, and concerned foreign governments should provide the resources needed to help the civilians fleeing ISIS-controlled areas,” Van Esveld said. “Right now, these women and children are stuck in a dangerous limbo, in grim conditions, with no exit.”