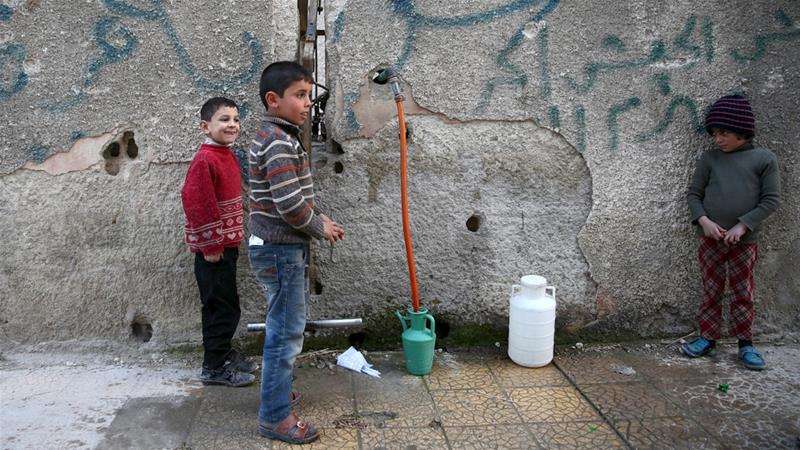 Authorities in Syria say they have been forced to cut water supplies to the capital after rebels reportedly contaminated drinking water with diesel.

The Damascus water authority said late on Friday that it had resorted to using water reserves to meet the city's demands, after rebels who control territory northwest of Damascus, contaminated the al-Fija spring.

The spring, which supplies the capital with much of its water, is located in the rebel-held Wadi Barada valley, a mountainous area near the Lebanese border.

The water authority said it expected the problem to be resolved in a "few days".

A news outlet run by Syrian government's ally, Hezbollah, said the rebels had refused to leave the Wadi Barada valley and as a result, the Syrian army began an offensive against them on Friday.

Deliberate cuts to water and electricity supplies have caused significant suffering to civilians with the Syrian army and rebels accused of using water as a weapon.

Aid workers from the International Committee of the Red Cross have helped water boards and engineers maintain and repair ageing pumping stations but as much as half of the total production capacity has been lost or damaged.

Through a series of so-called settlement agreements and army offensives, the Syrian government, backed by Russian air power and Iran-backed militias, has been steadily suppressing armed opposition around the capital.

The Syrian civil war started as a largely unarmed uprising against President Bashar al-Assad in March 2011, but quickly developed into a full-on armed conflict.

Staffan de Mistura, the UN special envoy to Syria, estimated in April that more than 400,000 Syrians had been killed since 2011.

Calculating a precise death toll is impossible, partially owing to the forced disappearances of tens of thousands of Syrians whose fates remain unknown.

Almost 11 million Syrians - half the country's pre-war population - have been displaced from their homes.