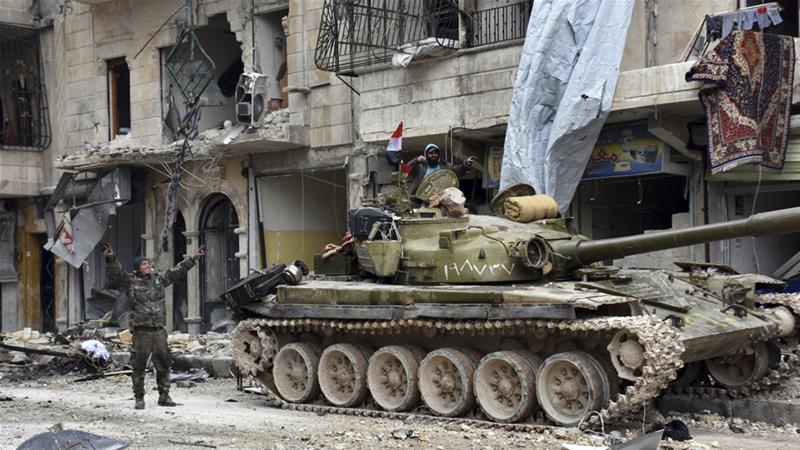 Hundreds of civilians fled a mountainous region outside the Syrian capital on Sunday where government forces battled several insurgent groups, including one excluded from a recent nationwide ceasefire.

The Syrian military said some 1,300 people fled the Barada Valley region since Saturday. The region has been the target of days of air strikes and shelling despite the truce, which was brokered by Russia and Turkey and appears to be holding in other parts of the country, despite some reports of fighting.

The truce went into effect early Friday, and the government and the opposition are expected to meet for talks in Kazakhstan later this month.

Russia, a key military ally of Syrian President Bashar al-Assad, and Turkey, a leading sponsor of the rebels, are acting as guarantors of the agreement, which excludes Jabhat Fateh al-Sham - formerly known as al-Nusra Front - and Islamic State of Iraq and the Levant.

On Saturday, the UN Security Council unanimously adopted a resolution supporting efforts by Russia and Turkey to end the nearly six-year conflict in Syria and jump-start peace negotiations.

The military said those fleeing Barada Valley were relocated to safer areas and their names were registered by the Syrian Arab Red Crescent.

Rami Abdurrahman, who heads the Britain-based Syrian Observatory for Human Rights, said there were buses in the region ready to evacuate civilians but could not confirm how many people had left.

He said the Barada Valley region is not part of the ceasefire because of the presence of Jabhat Fateh al-Sham.

The Barada Valley Media Center said Lebanese Hezbollah fighters were firing on villages and towns in the water-rich region as Russian and government aircraft carried out raids for the 10th consecutive day Saturday. The Lebanese group has sent thousands of fighters to Syria to bolster Assad's forces.

The Barada Valley is the primary source of water for the capital Damascus and its surrounding region.

The government assault has coincided with a severe water shortage in Damascus since December 22. Images from the valley's Media Center indicate its Ain al-Fijeh spring and water processing facility have been destroyed in air strikes. The government says rebels spoiled the water source with diesel fuel, forcing it to cut supplies to the capital.

The Syrian Observatory and the Aleppo Media Center, an activist collective, reported government air strikes on rebel-held villages near the northern city of Aleppo, which was recently returned to full government control.

State news agency SANA said two suicide attackers blew themselves up in the coastal city of Tartus, killing two security officers who had stopped them shortly after midnight, as residents were celebrating New Year's Day.

A news website close to Iran's Revolutionary Guard, meanwhile, said General Gholam Ali Gholizadeh, a veteran of the Iran-Iraq war in the 1980s, was killed fighting in Syria. It did not provide further details. Iran is also closely allied with Assad.