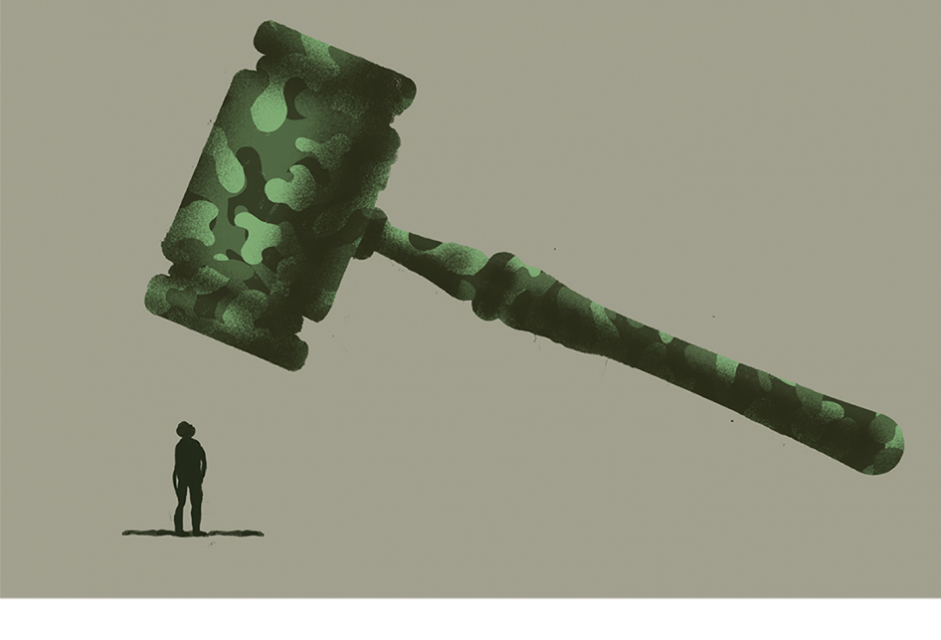 On Monday morning, I was stopped when I tried to enter Lebanon’s secretive military court to observe the trial of 14 protesters arrested at one of the 2015 demonstrations against government corruption and the waste management crisis. I was finally allowed to enter two hours later, only after enlisting help.

In Lebanon, civilians, including children, face trial in military courts for a broad range of crimes, including any altercation with a member of the military or security services. These trials are often held behind closed doors.

Last week, Human Rights Watch released areport on the use of military courts to try civilians in Lebanon, in which we documented inherent due process deficiencies, the use of confessions extracted under torture, and allegations that Defense Ministry or army officials have used the courts’ broad jurisdiction to intimidate people or retaliate against critics or activists. Under international law, governments are prohibited from using military courts to try civilians when civilian courts can still function.

Military court hearings are ostensibly public. But because the court is inside a military zone, human rights organizations, journalists, and the general public are not free to enter and monitor these trials without prior permission. This inhibits the ability of independent observers to monitor due process violations and obscures the number of civilians tried before the courts. That number is not public, but according to the Union for Protection of Juveniles in Lebanon, 355 children were tried before the military courts in 2016 alone.

On December 14, we submitted a request to the president of the Military Court for permission to monitor the protesters’ trial. We never received a response. But this morning, an army guard at the court entrance told me, “Court proceedings here are not monitored. It’s not allowed.” We were only able to enter the court after a journalist I was with called a military officer, who then reached out to the president of the court. For his part, the president said that he never received our request and insisted that, in the future, we should speak with him directly for permission to enter the court.

The process I went through makes clear that these courts are not open to the general public.

There is a real need for greater scrutiny of military trials. During the three hours I was there, I observed dozens of people come before the court. In many cases, they did not have lawyers with them, and so accepted court appointed counsel. Their cases, however, proceeded on the spot, with defendants responding to questions from the bench without the chance to consult with lawyers and before lawyers could study the case files.

Three of the defendants alleged that they had been tortured or ill-treated in detention. One of these men, and a fourth defendant, said that they only confessed because they were coerced during interrogations. Yet the court appeared to gloss over the allegations and did not attempt to identify the people they said had abused them. In only one case did the judge ask questions to assess whether there was additional evidence of abuse. But when the defendant said that security forces took photos of his bruised body and that he had visited a clinic after being released, the court made no apparent attempt to follow up on the allegations.

When it came time for the protesters’ hearing, defense counsel requested that the case be considered alongside a complaint against security forces for abuse of force at the protest. The judge agreed to postpone the hearing, and ordered that defense counsel be allowed to review video and photographic evidence held by the prosecution, an important development.

After the appearance, one of the defense lawyers approached me to say that it was clear to her that the court felt “observed” during the session, allowing the defense to make their case at greater length and without being interrupted. She felt that public monitoring had made a difference.

Lebanon should remove civilians and especially children from the military courts’ jurisdiction.

But in the meantime, the least authorities can do is open these courts up to the public. If authorities are comfortable with what is happening in these courts, then they should have nothing to hide.