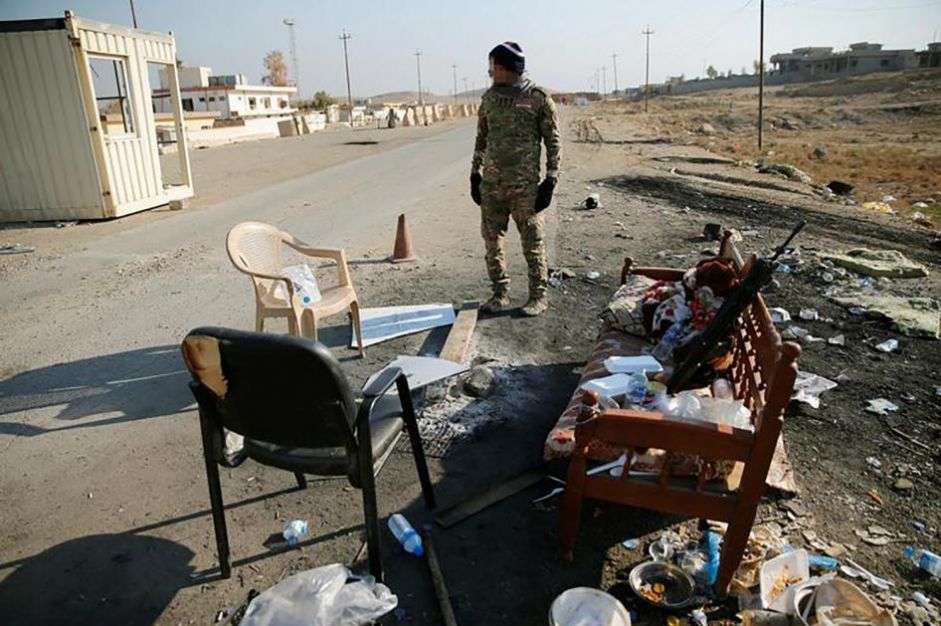 (Erbil) – Groups within the Iraqi military are screening and detaining men fleeing Mosul in unidentified detention centers where they are cut off from contact with the outside world.

The groups, the Popular Mobilization Forces (known as the PMF or Hashd al-Sha'abi), are apparently screening the men for suspected involvement with the Islamic State (also known as ISIS). Given these groups’ lack of training in screening, the irregular nature of these screenings and detentions, and the detainees’ lack of contact with the outside world, the detained men are at heightened risk of abuse, including arbitrary detention and enforced disappearance.

“In case after case, relatives are telling us that their male family members are being stopped by PMF fighters and disappearing,” said Lama Fakih, deputy Middle East director at Human Rights Watch. “While we cannot know exactly what has happened to the men detained, the lack of transparency, particularly for their families as to their whereabouts, is cause for real concern.”

Iraqi authorities should only allow bodies with a screening mandate to screen people and ensure that anyone detained is held in a recognized detention center accessible to independent monitors and granted their due process rights enshrined in international and Iraqi law. All detention should be based on clear domestic law, and every detainee should be brought promptly before a judge to review the legality of their detention. Iraqi law requires that authorities bring detainees before an investigative judge within 48 hours of their detention.

The authorities should ensure that detainees’ families know where they are and publicly issue information about the number of people detained as part of the operation to retake Mosul from ISIS.

Human Rights Watch interviewed families from one village, Nzara, who said that PMF fighters had taken all the villagers to another town for 15 days in November 2016, then to refugee camps. But five men who had left the village to sell their sheep never returned and later were seen on a television broadcast identified as captured ISIS fighters. Another man who had left to sell his sheep described being attacked and detained by PMF fighters and eventually reunited with his family, but three men who had been with him in the car have yet to reappear.

Human Rights Watch also interviewed members of four displaced families who traveled between December 26 and January 15, 2017, through a screening site about two kilometers south of eastern Mosul that was under the control of the Iraq Security Forces’ ninth division. The families each said they arrived with large numbers of civilians fleeing, between 1,500 and 4,000 people. They said they also saw between 7 and 20 local PMF fighters there, distinguishable by their badges, accents local to the area, and by their civilian dress. One heard the local fighters being called Abu al-Hashad, signifying their PMF affiliations.

The families who passed through the site all described the same screening process, which was carried out overnight. When they arrived, usually in the evening or at night, men and boys aged 15 and above were separated from women and other children, who went into one of four tents. The military checked each of the men and boys’ IDs against lists of people wanted by various Iraqi authorities for suspected ISIS-affiliation.

This is the common procedure facing all men and boys fleeing the current conflict, usually at the first screening site they reach, and sometimes repeated at multiple other sites, dozens of men and boys who fled have told Human Rights Watch. The men from two of the families said that at least eight men screened with them were detained after the ID check.

After that, the men said, they were separated into groups by their Mosul neighborhoods, and four masked men came and pointed at a few men, whom they took away. The men said that as many as seven other men also were taken away, with no explanation from the military and PMF officers. The seven detained men did not reappear before the rest of the group left on buses with their families for the camps the next morning. They did not personally know any of these men, so did not know if they had been with their families or alone.

On January 10, one soldier from the ninth division working at the screening site told Human Rights Watch that he had been stationed there for several weeks and that every night, PMF fighters from the area, known as Tashkeelat Nawadar, led by Abdulrahim al-Shammiri, would come and detain groups of men who were not included on the authorities’ “wanted lists.” A fighter with the Nawadar Hashad, based at the site, confirmed that his forces were detaining men on a nightly basis, because they were sure these men were ISIS-affiliated. He would not divulge what happened to the detained men. One man who passed through the screening site referred to the PMF there as Hashad Nimrud, and another as the Hashad Nineveh, two different local Hashad groups.

A nongovernmental organization working in the area confirmed to Human Rights Watch that the screening site is under Iraqi military control, but the road and area are under PMF control. Human Rights Watch has been unable to locate the detained men or any families of men detained at the site.

The authorities should ensure that no groups are carrying out screening without legal authority. They should inform family members of the location of anyone detained, allow family members to contact them, and ensure that anyone detained is brought before a judge within 48 hours to comply with Iraqi law. The authorities should publicly issue and update numbers on how many people are being held, where they are from, and where they are being held.

“Some men appear to be vanishing into the night even after official screenings by Iraqi security forces confirmed they were not on their wanted lists” Fakih said. “It is crucial for the authorities to take all measures to ensure that their whereabouts are known and the scale of detention is documented.”

Human Rights Watch interviewed three men from the village of Nzara, which residents call Nzaza, 40 kilometers west of Mosul. They all said that on the morning of November 4, at about 7 a.m., five other men from the village, which was under ISIS control at the time, left to sell sheep at a market in Tal Abtah, 30 kilometers south and also under ISIS control. One of those interviewed said that two of the five were his brothers, and that he saw them set out that morning.

Two of the men interviewed said that a few hours later, over 100 fighters from Badr, one of the most prominent groups within the PMF, took control of Nzara and forcibly bused all the residents, about 260 families, to the village of Jurn, 25 kilometers east. The Badr fighters were recognizable from their badges and banners. Once in Jurn, the PMF checked the men’s identity cards and cleared everyone for release. They kept the residents in Jurn for 15 days, providing food, drinks, and shelter, then bused them to refugee camps.

The five men who had gone to Tal Abtah did not join their relatives in Jurn, the men interviewed said. Instead, about 10 days later, they saw the men on film on al-Walaa TV, a channel affiliated with Badr. A banner under the footage said they were ISIS fighters in the custody of Badr’s third brigade in the village of Um Hijarah al’Ulya, six kilometers south. The men said the families have tried to locate the detained men through negotiations led by tribal leaders but have found out nothing more about them.

Another Nzara villager, “Ahmad,” 44, said that he and three other men had left the village at 6:30 a.m. that morning for Tal Abtah to sell some of their sheep and that PMF, also recognizable by badges and banners, attacked them on their way home. He was wounded and detained, along with the villager who had driven the truck with the sheep to market, and did not know what happened to the other two men in the car. He said the fighters helped stabilize his condition, blindfolded them, and drove them somewhere about 30 minutes away.

There, he said, he was moved into a room, where he was held blindfolded for the next seven days. On the first day, the fighters took his documents, including his identity card and about US$660 from selling the sheep. He did not know what happened to the driver. Someone else was in the room with him, but he did not know who, and was afraid to ask. People there treated his wounds. No one interrogated him or raised any specific allegations against him, he said, but he was not allowed to contact a lawyer or his family. On the eighth day, they put him in an ambulance and took off his blindfold. The ambulance drove him to Jurn, where he found his family.

Ahmad said that the brother of the driver who was with him the day of the arrest told him that he called a friend in the Iraqi Security Forces who said that he had located his brother, who was getting medical treatment for injuries at Tal Afar airport, 60 kilometers west of Mosul, which the PMF was using as a base. A PMF fighter told Human Rights Watch that the forces have a detention center in the area, but would not divulge where. Ahmed said he has not received any news about the other two men he was with.