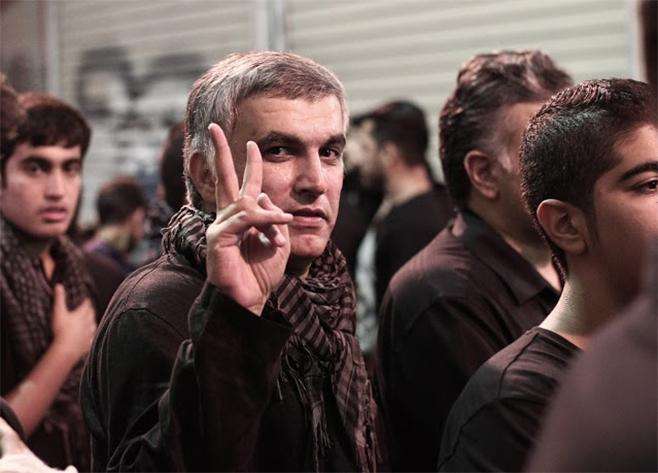 (Beirut) – The trial of the prominent Bahraini human rights activist Nabeel Rajab is scheduled to resume on February 21, 2017, Human Rights Watch said today. He faces a total of 18 years in prison based on two sets of speech-related charges that clearly violate his right to free expression. His eight months in pretrial custody appeared to amount to arbitrary detention.

Rajab’s initial charges stem from comments critical of the Saudi Arabia-led coalition airstrikes in Yemen and of alleged torture in Bahraini prisons. Authorities also charged him with making “false or malicious” statements based on television interviews in which he criticized the Bahraini authorities’ refusal to allow journalists and rights groups into the country.

“What worries Bahrain authorities is the truth,” said Joe Stork, deputy Middle East director at Human Rights Watch. “The reason Nabeel Rajab is in jail and facing a long sentence is that he has insisted on shedding light on Bahrain’s human rights abuses.”

Comments on Rajab’s Twitter account about the Saudi-led coalition airstrikes in Yemen led to his initial arrest, on April 2, 2015. Authorities released him on July 13, 2015, but prosecutors ordered his re-arrest on June 13, 2016. Bahrain’s penal code provides for up to 10 years in prison for anyone who “deliberately announces in wartime false or malicious news, statements or rumors.”

At the last session of his trial for the first set of speech charges, on December 28, 2016, a judge ordered Rajab’s release on bail, but authorities immediately re-arrested on the basis of an alleged violation of article 134 of the penal code in relation to media interviews he gave in 2014 and 2015 about the move to keep foreign journalists and rights groups out of the country. The third session of his trial in this case will also take place on February 21, 2017.

Article 134 of the penal code makes it a crime to publish “false or malicious” information abroad that is deemed to “adversely affect” the “prestige or position” of Bahrain and provides for a maximum prison sentence of three years.

Those denied entry to Bahrain in recent years include representatives from Human Rights Watch and Amnesty International; Juan Mendez, the United Nations special rapporteur on torture and other cruel, inhuman, and degrading treatment; and scores of journalists, academics, and activists. The rights group Bahrain Watch, in February 2016, published a listof all the names of those denied entry to Bahrain since 2011.

On September 4, 2016, the New York Times published an opinion piece by Rajab about human rights abuses in Bahrain, and on December 20, Le Monde published a second article from Rajab. Bahraini authorities interrogated him about both articles and referred both cases to the public prosecution for investigation into alleged violations of article 134 of the penal code relating to alleged “false or malicious information.”

The conditions of Rajab’s detention have at times appeared to amount to arbitrary punishment. He was in solitary confinement for more than two weeks after his arrest and was denied compassionate leave to attend a relative’s funeral.

The UN Standard Minimum Rules for Non-Custodial Measures state that “pre-trial detention shall be used as a means of last resort in criminal proceedings, with due regard for the investigation of the alleged offence and for the protection of society and the victim.”

“If past practice is any guide, a court decision in Rajab’s favor will be followed by new charges relating to his comments in the New York Times and Le Monde,” Stork said. “It seems Bahraini authorities intend to keep him in custody no matter how preposterous the grounds.”