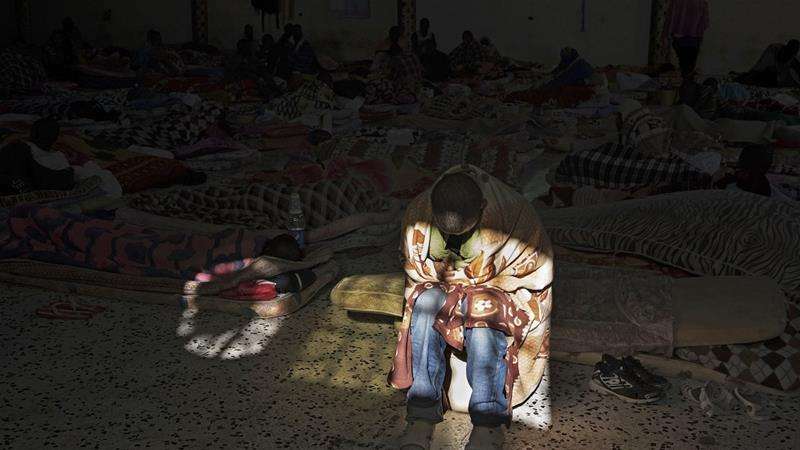 Tripoli, Libya - On February 21, the bodies of 74 migrants were found by the Libyan Red Crescent on the shore of Zawiya, a Libyan town known for being a capital of fuel smuggling and human trafficking.

A Zawiya resident said he was on the beach as Red Crescent volunteers filled dozens of body bags.

"The first thing I did on the shore was search for the rubber boat in which they left," said the Zawiya resident, who preferred not to reveal his name for security reasons.

"It was not far from the corpses, destroyed, and the first thing I noticed was that the engine was not there. This probably means when the smugglers realised that the rubber boat was sinking, [they] came back ... to carry off the engine. They will use it for other migrants."

Libya's militias have become increasingly powerful amid the power vacuum since Muammar Gaddafi's toppling in 2011. The militias control the human trafficking trade, and many young Libyans lacking work are eager to join.

"We are realising that more and more young people are attracted by these crimes," the man said. "The young people need money, and the smugglers provide them with this money. Nobody cares if migrants arrive in Europe alive or if they die drowned in the sea ... they are worse than murderers."


Migrants - who pay $1,500 per "seat" on the boats - are considered a kind of ATM by smugglers, who also control the detention centres where migrants are held.

The most powerful militia in the area is Abu Himyra al-Naser (translated as "Victory"). Another Zawiya resident, who spoke under condition of anonymity, said the militia's boss "is paid directly by the government with the task of monitoring what's going on in the harbour. He should work together with official navy officers, but actually he is the boss of the human trafficking here. He not only manages what happens in the port; he also directly controls several detention centres."

Libya's Interior Ministry has little control over these centres, where militias exploit, blackmail, abuse, and even sell migrants to other militias.

A source at the Libyan Interior Ministry confirmed this. "Corrupt coastguards gave migrants to the militias, and the militias keep them in illegal detention centres," he said. "There, they start to blackmail migrants. They take their money, phones, documents. With the phone numbers they find in their mobiles, smugglers call their families asking for ransom to free them. The militias also sell them to masters in the area who use them to work for free. Fighting them is almost impossible, even for the official police."

Issa, 40, who did not provide his last name, works for the Coast Guard in Gasr Garabulli, a town 60 kilometres east of Tripoli. He said the Libyan coast today is "a tragedy".

"Until two years ago I had a dinghy to try to stop the boats leaving. Today all that remains is wreckage. The rubber boat broke down and the Coast Guard of Tripoli did not not send me any means to replace it. Now I no longer have resources to control the coasts."

Issa sits alone on a wooden bench, watching the sea with a radio transmitter beside him. The Coast Guard headquarters here consists of a concrete house overlooking a small port. The house is nearly bare: Inside is a table, a map, a compass and a refrigerator with little food.

"See over there," Issa said, indicating a stand of trees around the bend. "The coast is surrounded by woods where they can easily collect migrants the evening before departure."

Smugglers hold migrants in makeshift houses for days, sometimes weeks, before departure. "We all know where migrants are gathered," Issa said. "Human trafficking is a chain made up of many tasks: Someone is responsible for bringing them food, someone is responsible to find a dinghy, someone has to bring migrants to the shore at night."

Issa said he has been threatened by local traffickers, who offered him money to close his eyes and pretend not to see the boats departing. He refused, and two armed boys came by at night, threatening to kill him.

"The situation is out of control," Issa said. "Only confusion reigns. I know coastguards directly paid by the militias, they are accomplices of smugglers. They are an active part of their chain. Often the Coast Guard itself recovers rafts ... and gives them to the militias that control human trafficking. This is one of the reasons why Europe has recently decided to give money to the Libyan Coast Guard - to control what happens here."

On February 3, European Union leaders approved a plan to curb migration from Libya. The plan called for giving €400m ($423m) to Libya, offering training and equipment to the Libyan Coast Guard, and improving detention centres.

"[It] makes me bitterly smile. Now it's too late; there are too many corrupt people," Issa said.

"Europe does not want to help us," he said. "Europe wants to stop seeing the dead. European leaders only want to shift the problem, not to solve it."