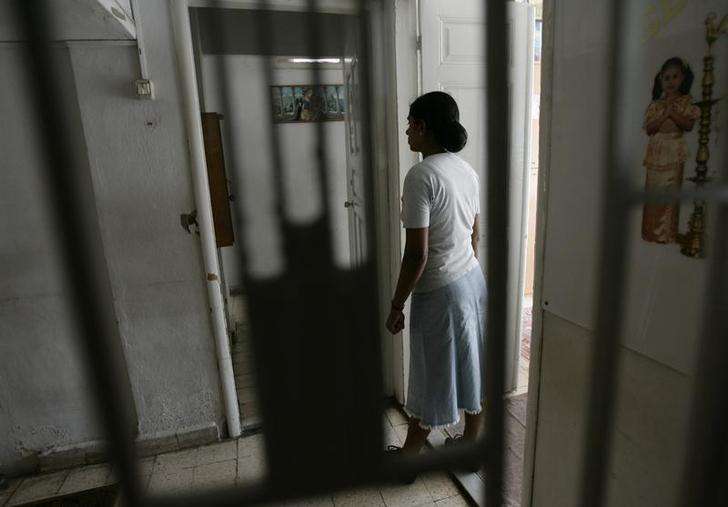 (Beirut) – Lebanon’s General Security agency has detained and deported migrant domestic workers apparently for having children in Lebanon, Human Rights Watch said today. Authorities should stop deportations and release anyone detained for this reason. Denying residency renewals to long-term workers who have given birth while living in Lebanon disproportionately interferes with their right to family life.

Lebanese authorities have deported at least 21 domestic workers with children since the summer of 2016, saying that they were not living with their employer or were not supposed to give birth in Lebanon, according to Insan, a local human rights organization. None of these women were accused of violating their visas by working for multiple employers, and Insan has not documented a similar pattern of deportations of women without children living outside their employer’s home. Human Rights Watch spoke with three of the migrant domestic workers with children who have been deported, and corroborated their stories with local nongovernmental organizations and a community leader.

“Working in Lebanon doesn’t mean that these women lose the right to start a family,” saidLama Fakih, deputy Middle East director at Human Rights Watch. “These deportations throw families’ lives into turmoil and punish workers for no reason.”

The women told Human Rights Watch by phone that the deportations had a devastating effect on their lives, cutting off their ability to work, splitting up families, and interrupting their children’s education. Some of these women had lived in Lebanon for decades, with children who were born and grew up here.

“Monika,” who after working in Lebanon for more than 20 years was detained and then deported along with her 16-year-old daughter in early 2017, told Human Rights Watch: “Now my daughter is not in school, and we have no work, and now life is too difficult for us here in India. For us, eating is difficult.”

In December 2016, “Kumari” was detained and subsequently deported with her daughter, 14, after working in Lebanon for 30 years. Her husband remained in Lebanon for work, splitting their family apart. “What did we do? Did we steal? Did we kill someone?” she asked. “I worked for people [in Lebanon] all my life, for 32 years. We worked, worked, me and my husband, to put our children through school, to pay money to educate them there, and they treat us like that?”

Sources within General Security, the agency in charge of foreigners’ entry and residency, confirmed to nongovernmental groups in 2014 that the agency had issued a new directive to deny residency permit renewals to Lebanon-born children of low-wage migrants and their parents.

In 2014, Human Rights Watch found that several migrant domestic workers with children were denied residency renewal. Some were told they were not allowed to have children in Lebanon and given a short period of time to leave the country. At the time, General Security did not respond to written requests from nongovernmental groups, including Human Rights Watch, for a copy of the 2014 directive.

The detentions and deportations largely ceased in the summer of 2015, but apparently resumed in summer 2016, Insan said, with dozens of migrant domestic workers with children summoned to General Security offices and then detained or denied residency renewal.

Human Rights Watch wrote to General Security about these deportations on March 20, and the agency responded on April 19, stating that “General Security did not deport or send away any domestic worker with a child that she wanted to bring with her,” but that a migrant domestic worker giving birth to a child in Lebanon would be “difficult to achieve without violating many laws and regulations” and “the persistence of violations of applicable laws in any country would set its inevitable outcome on the transgressor.” Human Rights Watch wrote to General Security on April 20 seeking clarification as to the meaning of their statement, but did not receive a response.

The estimated 250,000 migrant domestic workers in Lebanon are excluded from labor law protections, and a kafala (visa-sponsorship) system subjects them to restrictive immigration rules, placing them at risk of exploitation and abuse. The large majority of these workers are women, who typically have short-term contracts and are expected to live in their employer’s home.

Migrant domestic workers in Lebanon commonly report non-payment of wages, forced confinement, employers’ refusal to provide time off, and verbal and physical abuse. In 2010, Human Rights Watch found that Lebanon’s judiciary failed to hold employers accountablefor these abuses. In 2008, Human Rights Watch found that migrant domestic workers were dying at a rate of one per week, with suicide and attempted escapes the leading causes of death.

Lebanon is obligated under article 23 of the International Covenant on Civil and Political Rights to respect the rights of men and women of marriageable age to marry and to found a family. The 2014 General Security directive and its implementation result in disproportionate interference in family life, in particular the separation of families through expulsion. Furthermore, Lebanon has an obligation under the International Convention on the Elimination of All Forms of Racial Discrimination to avoid “expulsions of non-citizens, especially of long-term residents, that would result in disproportionate interference with the right to family life.”

Children have a right to, as far as possible, be cared for by their parents, and the right to family relations without unlawful and disproportionate interference. The Convention on the Rights of the Child (CRC) requires countries to “ensure that a child shall not be separated from his or her parents against their will, except when ... such separation is necessary for the best interests of the child.”

In any proceeding that could lead to the separation of children from their parents, all interested parties, including the children, should be given an opportunity to participate and make their views known, and any separation must be subject to judicial review. The convention also says that countries should deal with questions of parents or children entering a country for the purposes of family unity “in a positive, humane, and expeditious manner.” Lebanon is required under the convention to secure the rights to all children within its jurisdiction, without “discrimination of any kind.”

The Lebanese government should comply with its international obligations by ensuring that General Security considers the family interests involved and the best interests of the child before rejecting the renewal of residency for workers or their children or considering their expulsion, Human Rights Watch said. The government should also ratify the International Convention on the Protection of the Rights of All Migrant Workers and Members of Their Families and the ILO Domestic Workers Convention to safeguard the rights of migrant domestic workers in Lebanon.

“Lebanese authorities should immediately stop deportations or detention of migrant domestic workers for having children in Lebanon,” Fakih said. “Having a child in Lebanon should not be treated like a crime, and the people who come to take care of Lebanese citizens for years should be allowed to have families as well.”