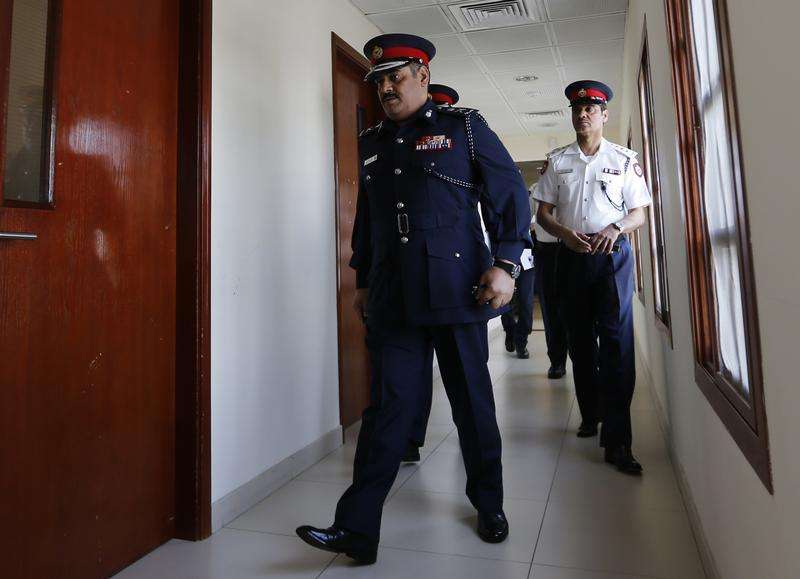 (Beirut) – Bahraini authorities’ treatment of wrongfully imprisoned detainees violates international standards on prisoner treatment and in some cases may constitute cruel, inhuman, or degrading treatment, a coalition of ten rights groups said today. The authorities should ensure that all detainees are treated with humanity and in accordance with the United Nations Standard Minimum Rules for the Treatment of Prisoners, known as the Nelson Mandela Rules, including access to the adequate medical care they require and contact with their relatives.

Family members of 12 opposition activists or human rights defenders held in Building 7 of Jaw Prison have told rights groups that under new regulations the authorities shackle the men, many of them elderly and in poor health, whenever they leave their cells, including for medical visits. The men are serving long prison terms in connection with their prominent and peaceful roles in the pro-democracy uprising in February 2011.

The authorities should immediately and unconditionally release all prisoners held solely for peacefully exercising their rights to freedom of expression and peaceful assembly, the groups said.

On April 12, 2017, Abdulhadi al-Khawaja, a human rights defender held in Building 7, began a hunger strike to protest the new regulations at Jaw Prison, which the prisoners believe are a disproportionate response to the escape of 10 prisoners from another part of Jaw Prison on January 1.

In addition to the shackling, which has led the detainees to refuse to attend medical appointments in protest at what they perceive as degrading treatment, the authorities have cut visiting hours and the time for phone calls with their relatives.

Since the escape, which resulted in the death of a police officer, family members of the opposition and human rights activists and several other prisoners have told the rights groups that the authorities’ treatment of their relatives has worsened significantly.

Since March 1, authorities have shackled prisoners in Building 7 whenever they leave their cells. This practice is contrary to Rule 47 of the Mandela Rules, which states that restraint instruments should only be used as a precaution against escape or to prevent prisoners from injuring themselves or others. Family members of prisoners in other buildings have also told rights groups that their relatives are shackled whenever they leave their cells and that since the escape, their cells are locked most of the day, meaning that those without toilet in their cell have only limited access to toilets.

International human rights mechanisms have said that the use of restraints on elderly or infirm prisoners who do not pose an escape risk can constitute ill-treatment. The prison authorities appear willing to abide by some of the Nelson Mandela Rules by transferring patients requiring specialized treatment to specialized institutions or civil hospitals. But the disproportionate use of physical restraints is degrading and is preventing detainees from getting the health care they require.

Family members of Al-Khawaja, 56, told rights groups that he had an appointment with an eye specialist at the Bahrain Defense Forces military hospital on March 12 because of headaches and vision problems. But the prison administration insisted that he had to wear the prison uniform, have his legs and ankles shackled, and submit to full body strip search.

The family said he refused because of the humiliation involved. Al-Khawaja wrote to the prison authorities in March requesting a new medical appointment and to be allowed to go without a strip search and shackles, but has received no response. On April 12, he began a hunger strike. His family expressed concern about the impact of his hunger strike on his already deteriorating health and said that on April 15 he refused medical attention to address a low blood sugar level in protest at the regulations.

On April 20, Al-Khawaja began to take necessary liquids to avoid losing consciousness and being transferred to hospital, where he feared he would be force-fed, as in past hunger strikes. He suffers from exhaustion, general weakness, and dizziness. He has lost weight and his blood sugar remains low.

A family member of Dr. Abduljalil al-Singace, 55, who requires crutches or a wheelchair as the result of polio and sickle-cell anemia, told rights groups that he refused to attend medical appointments, including a March 12 appointment with a hematologist and an appointment in early March to deal with a shoulder infection, because of the prison authorities’ insistence on shackling him with chains during the transfer.

Family members say that Mohamed Hassan Jawad, 69, and Hasan Mshaima, 69, have also refused essential medical appointments in protest over the authorities’ insistence that they be shackled and wear the prison uniform. Mshaima has heart problems and is a former cancer patient who requires regular checks-ups. His family said that he needs Positron Emission Tomography (PET) scans every six months and that the last one was over eight months ago.

“These leading Bahraini political and human rights activists have suffered deteriorating health during their prolonged arbitrary detention since 2011,” said Husain Abdulla, executive director of Americans for Democracy and Human Rights in Bahrain. “Shackling these prisoners of conscience is not a legitimate prison security measure but is intended to degrade and humiliate them. The international community must not forget these long-term prisoners of conscience and should work to end their unjust and punitive detention.”

Since March 1, the prison administration has reduced all prosioners’ family visits from one hour to 30 minutes, once every two or three weeks, and that prisoners are now separated from their families by a glass barrier during visits. Since June 2016, phone calls to their families, which they are allowed to make up to three times per week, have been cut from 40 minutes to 30 minutes combined for all calls. On March 20, prison authorities stopped providing the detainees with toilet paper or tissues.

On March 1, the detainees in Building 7 and others in Jaw Prison began boycotting family visits in protest.

“These opposition activists are prisoners of conscience who should not have spent even a single day in prison,” said Lynn Maalouf, research director at Amnesty International’s Regional Office in Beirut. “The authorities must immediately put an end to the collective and arbitrary punishment of the entire Jaw prison population as a result of the escape of a group of prisoners; they must release all prisoners of conscience without delay and ensure all prisoners are treated humanely and receive the adequate medical treatment they require.”

Rule 36 of the Nelson Mandela Rules states that discipline and order shall be maintained with no more restriction than is necessary to ensure safe custody, the secure operation of the prison, and a well-ordered community life. Thus, while authorities can take steps to minimize the risk of further escapes, the measures they introduce must be proportionate, should not impinge on prisoners’ dignity, and should not unnecessarily aggravate the suffering inherent in the deprivation of liberty.

Any deliberate infliction of inhuman or degrading treatment of prisoners should be investigated and those responsible held accountable.

Eleven of the 12 detainees in Building 7 were sentenced in trials that did not meet international standards on fair trials and convicted of crimes that included alleged involvement with a group whose purpose was to replace Bahrain’s monarchy with a republican form of government. The evidence produced against them at their trial consisted only of public statements advocating reforms to curtail the power of the ruling Al Khalifa family and “confessions” that were coerced while they were in incommunicado detention. The twelfth detainee, Sheikh Ali Salman, whose nine-year prison sentence wasreduced to four years on April 3, was convicted in relation to peacefully exercising his right to freedom of expression, following a grossly unfair trial.

The Bahrain Independent Commission of Inquiry’s report of November 2011 said that authorities subjected the group to a “discernible pattern of mistreatment,” including torture, after their arrests in some cases. Authorities have not provided physical or psychological rehabilitation for detainees who were tortured.