At HRC: a workshop organized on the human rights situation in the Arab World by Euro-Med 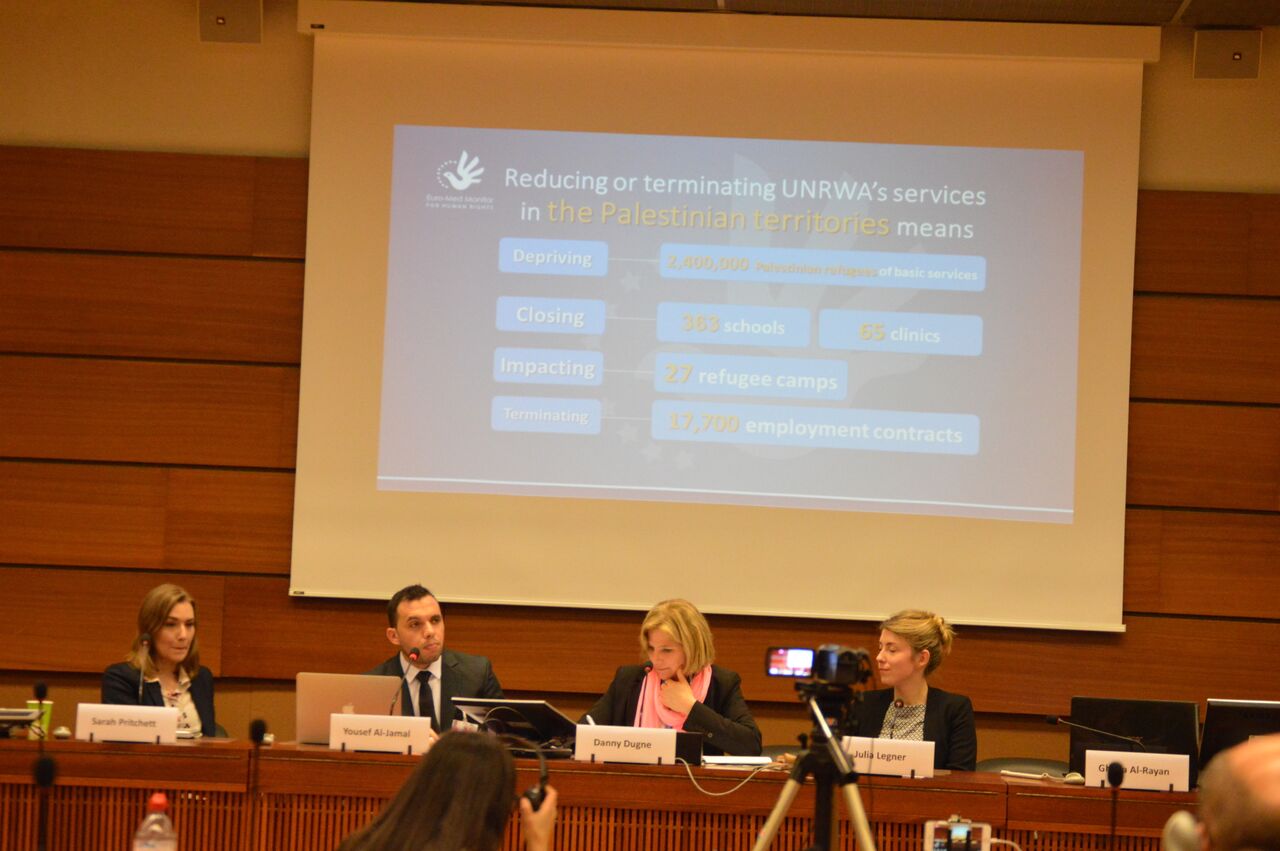 Geneva- A workshop on the human rights situation in the Arab world was organized by the Euro-Mediterranean Human Rights Monitor on Thursday. The speakers addressed several issues at stake including arbitrary arrests in Bahrain and Saudi Arabia and the difficult humanitarian situation of displaced Syrian Palestinians inside and outside of Syria in the aftermath of the ongoing conflict sweeping the country. The workshop also reviewed the reduction of UNRWA funds, highlighting the impact on Palestinian refugees in the diaspora, in addition to raising awareness of the difficult legal and living conditions foreign workers are subjected to in the UAE.

Moderated by Danny Dugnes, head of Scale for Justice, the side event aimed at urging countries to improve the human rights situation and provide updates and recommendations to the United Nations and civil society organizations.

In her presentation, the legal expert Julia Legner spoke on arbitrary arrests in Bahrain and Saudi Arabia, condemning Saudi Arabia’s failure to ratify the International Covenant on Civil and Political Rights (ICCPR) to date, which provides for certain basic rights. Legner also warned that the Kingdom does not cooperate with the United Nations Working Group on Arbitrary Detention regardless of it being elected as member of the United Nations Human Rights Council four times, stressing the importance for the United Nations to exert pressure on States to improve their commitment to human rights by virtue of gaining membership in the HRC.

Legner also warned of Bahrain’s continued cracking down on civil society, which has been backed by a repressive legal system, thus producing laws such as the 2006 Anti-Terrorism Act and the 2002 Press Law.

The appalling situation of Palestinian refugees from Syria after 7 years of conflict was highlighted by Ghada Al-Rayyan, Euro-Med Monitor’s researcher. More than 3,669 Palestinians, including 465 women, have died as a result of hostilities, blockade and torture inside Syria since the beginning of the conflict.

More than 206 Palestinian refugees died as a result of malnutrition and the lack of medical care under a persistent blockade, added Al-Rayyan, stating that most of them originated from the Yarmouk refugee camp in the Syrian capital Damascus.

In regards to the conditions of Palestinians who fled from Syria to other countries, more than 8,000 are suffering unstable conditions and basically depend on aid provided by donors in Turkey. Meanwhile, Palestinian refugees are experiencing difficult living and legal conditions in both Egypt and Jordan, while also depending on aid provided occasionally.

Regarding the UAE's sponsorship system for foreign workers, Sarah Pritchett of the Euro-Med Monitor stated that the main problem lies in the law that gives citizens and employers the authority to control the fate of these workers.

The UAE delegation to the Human Rights Council last October made claims that the UAE has made significant progress in amending and expanding labor regulations and protecting contracted labor. This claim ignores the very real poor and degrading conditions of employment in the UAE which persist under little or no engagement from the government, added Pritchett.

Regarding migrants working with contracting and construction companies, Pritchett said that “these workers have been suffering from exploitation and abusive treatment by their employers, in addition to low wages and poor housing conditions.”

Domestic workers are no less abused; most of them work for 21 hours per day, without breaks or leaves, which amounts to forced labor, said Pritchett, adding that they have been suffering from food deprivation and subjected to physical and sexual abuse, while employers are not held accountable.

Concluding her presentation, Pritchett called on the UAE authorities to end the sponsorship system, referring to it as a form of modern slavery. She also called for improving the conditions of workers, protecting their rights and ensuring accountability for harm caused by employers.

Yousef Al-Jamal, Euro-Med Monitor’s Advocacy Department Officer, highlighted the political developments that led to reducing the UNRWA services, reviewing how this reduction led to “the most dramatic financial crisis in UNRWA’s history”.

Al-Jamal also referred to the consequences of UNRWA services reduction on the Palestinian refugees in the Agency’s five areas of operations; Syria, Jordan, Lebanon, the Gaza Strip, and the West Bank.

US funding cuts on UNRWA’s budget had its effects on various aspects of refugees’ lives, including infrastructure, food, financial aid and employment.

Concluding his presentation, Al-Jamal called on the international community to exert further efforts to protect the Palestinian refugees by providing financial aid to compensate for the shortfall in UNRWA’s budget. 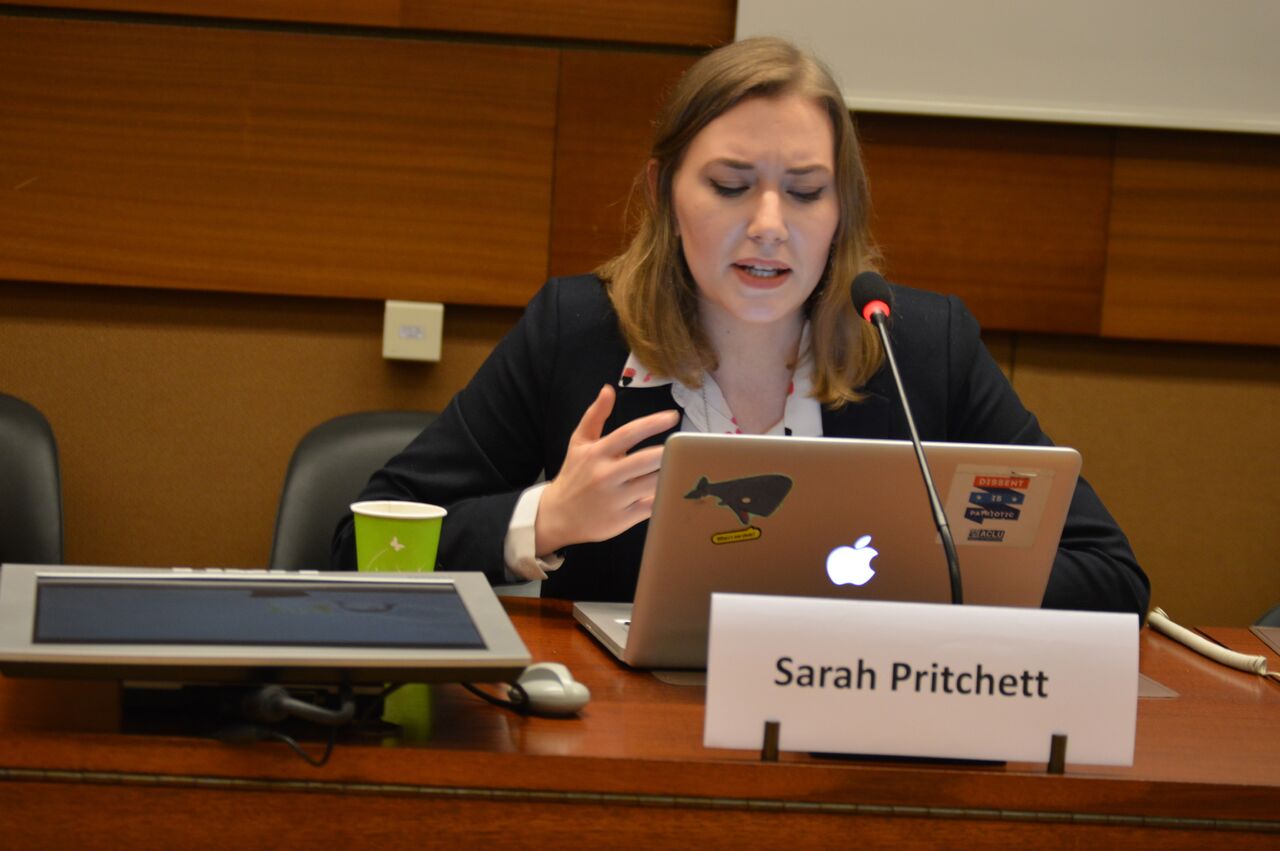 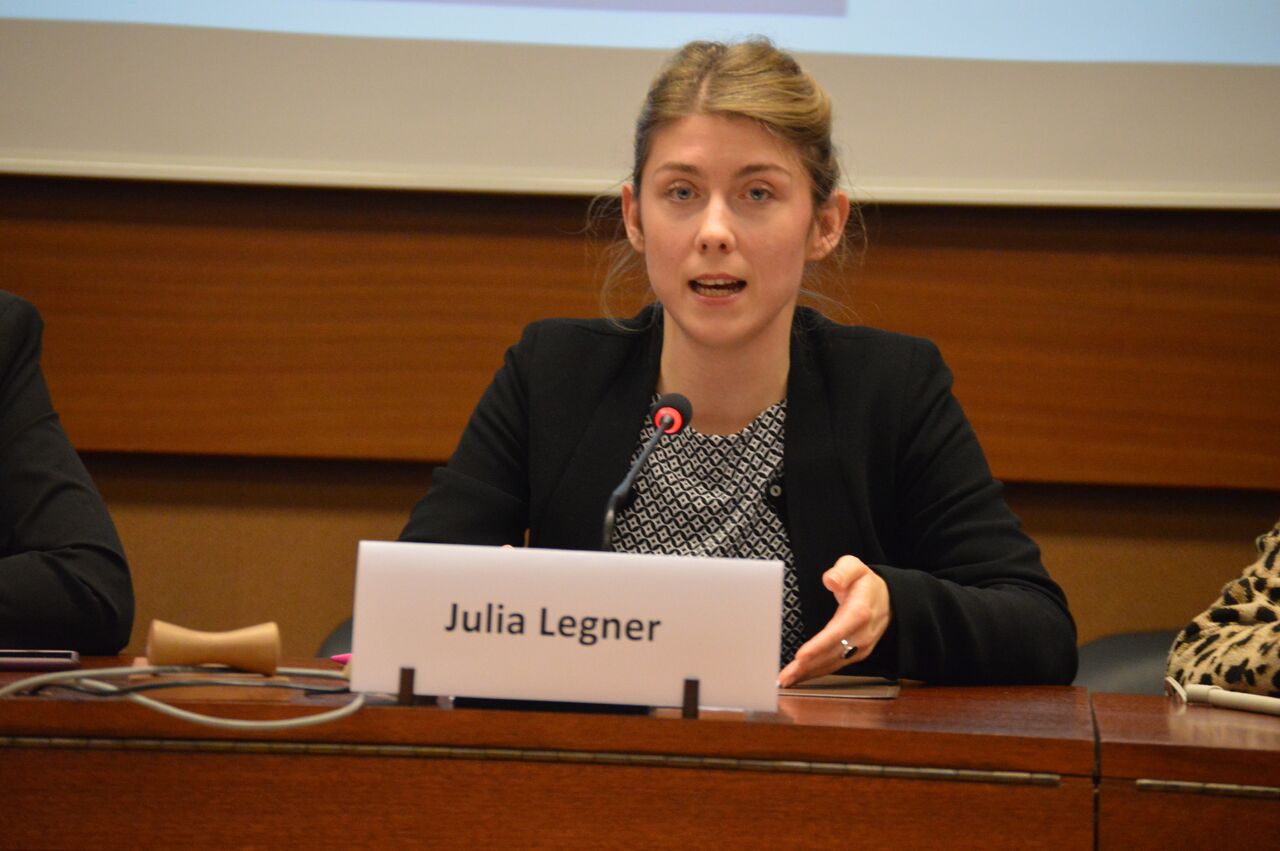 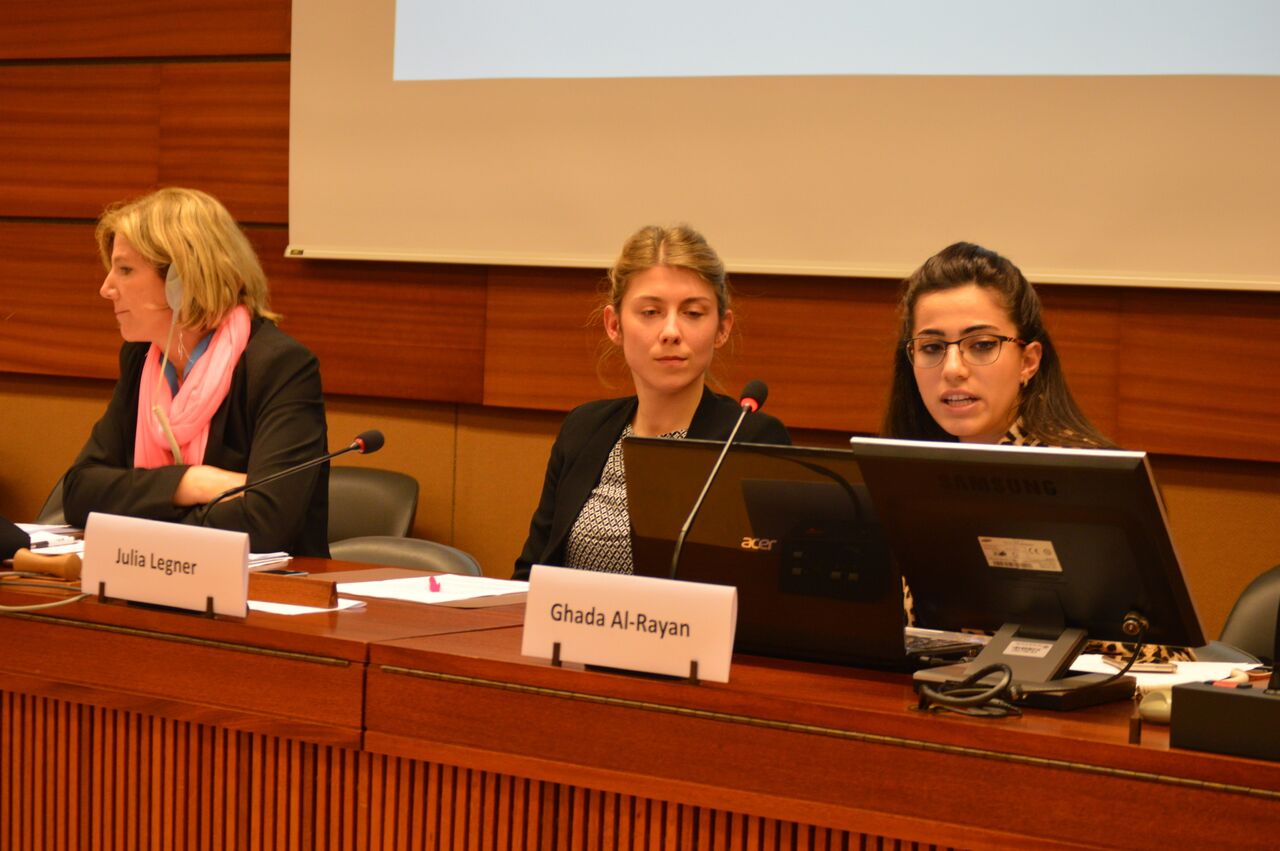 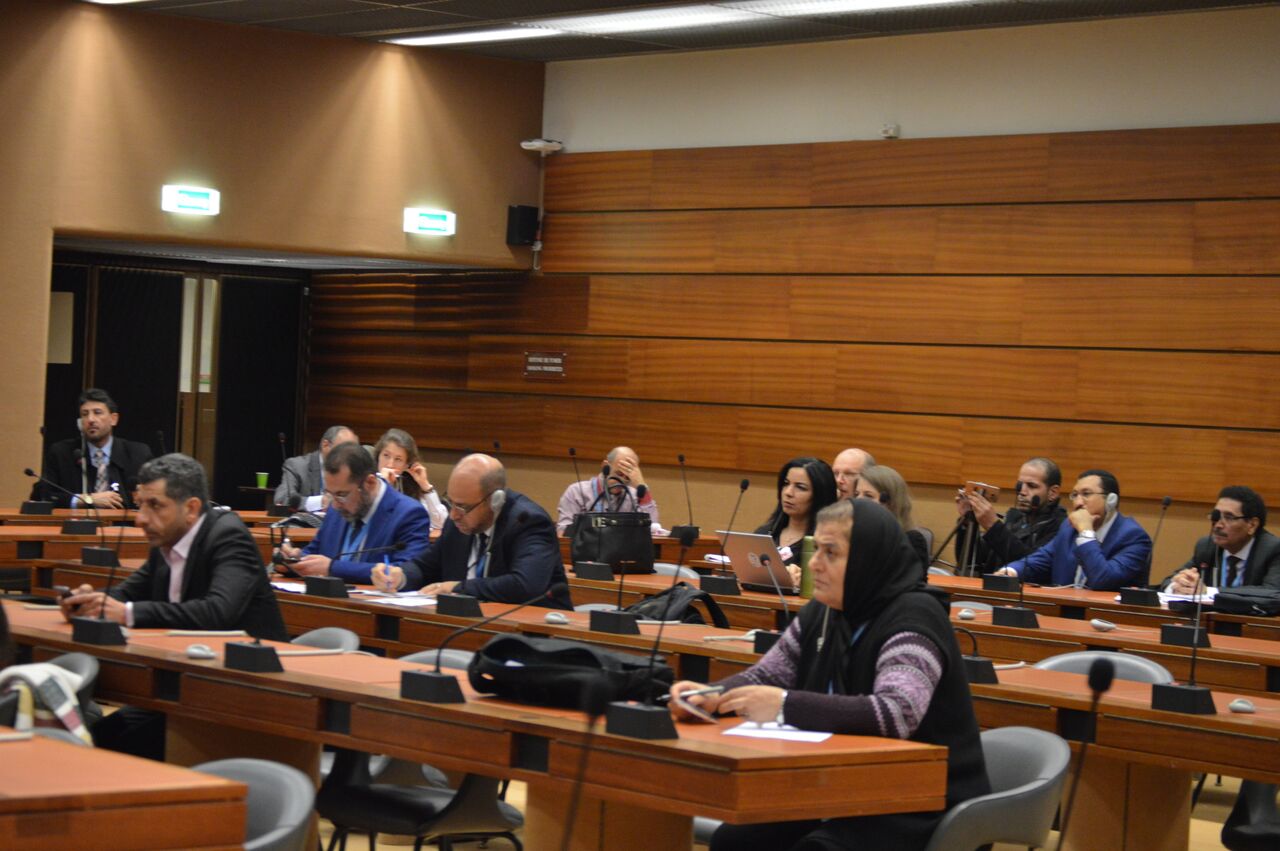