Why Europe Needs to Engage in Gaza 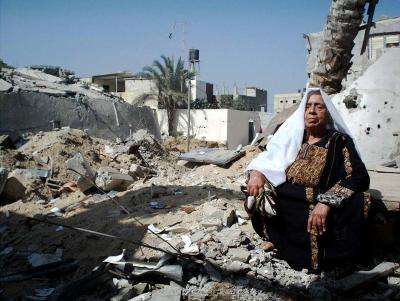 Europe was enthusiastic about engaging in Gaza when Israel disengaged from the Strip in 2005. That was a time of celebration for the Gazans who had forced the Jewish settlers of Gush Katif and the Israeli army to leave. And that was a time of success for the nascent European Union foreign policy that deployed a team of Europeans in record time to help monitor the Rafah crossing.

But Europe’s initial success was stymied by the agreement that it signed onto with the Palestinian Authority and Israel in November 2005, called the Agreement on Movement and Access (AMA). Ever accommodating to Israel’s security concerns, Europe respected the AMA and Israel closed access to the Rafah and then cut off the Gaza Strip with the emergence of Hamas on the political scene.

When you see Gaza in the news and you hear about the siege, you imagine that the Strip is entirely cut off from the world – hermeneutically sealed and slowly but surely putrefying, dying. The amount of trash on the sidewalks, streets and beaches is simply astounding and would attest to this possibility. One UN worker even predicted that “the environment is ripe for a cholera outbreak.”

Despite the dire situation, the continual threat of Israeli bombardments and the lack of trade and raw materials, the Gazans have found holes in the siege and are reconstructing the Strip. This is manifested by the relative building ‘boom’ – relative because it is far below any global standard – but unexpected and impressive considering Gaza’s isolation.

Almost all building projects currently underway are endorsing by Arab countries, particularly from the Arabian/Persian Gulf countries. Spear-heading a new form of diplomacy, Qatar is at the forefront.
In collaboration with the Islamic Development Bank and Gulf Cooperation Council (GCC) for the Reconstruction of Gaza, the Qatar Red Crescent is involved in constructing a new Special Surgery building at al-Shifa Hospital in Gaza City, to be completed in 2012.

In the Gaza City port, the entrance has been rebuilt with white lime-stones and a new sign in English and Arabic. A tower dedicated by Turkey to the 9 civilians killed by Israel in international waters stands solemnly with the names of the ‘martyrs’ engraved around the base.

In the pavilion area of the port, there are strips of faded green grass – a rare sight in Gaza – sprinkled with trash. There is trash all over the beach too, where boys scrub the boats and fishermen repair nets. Other boats have been docked and repainted with in fresh blue, red, yellow and white colors.

There is a general buzz of life in the shallow port. With the lack of maintenance, sands have accumulated over the years and the water is only 3 meters deep in some parts. The refurbishing of the port is another pending project to deepen the waters to 7 meters thus allowing larger trade and tourist vessels to dock properly.

Many countries, such as Qatar, see no point in waiting for those negotiations to be revived between Israel and the Palestinians and for the AMA to go into effect, eventually. The Qatar Charity logo is on the barrack walls of the new housing units being built in the port for the Palestinian fisherman. According to a port manager, the tin huts are being replaced by 250 units at a cost of 7.000 USD each – close to a $2 million investment.

Other projects endorsed by Saudi Arabia for Re-housing Palestinian refugees in Rafah with 875 housing units, an Emirates Neighborhood Project in Khan Younis (449 units remaining), and Japanese Project for Reconstructing Special Hardship Shelters (259 units) are all pending approval of material to be imported from Israel.

This is the siege we know of most: Israel denying the passage of goods and people to and from the Gaza Strip – despite the fact that the Israeli soldier has now been retrieved. What has replaced trade with Israel is a parallel illicit trade of trafficking goods via the tunnels with Egypt.

And now by sea: small fishing boats can easily cross into Egyptian waters and land on the Sinai without being detected or if they are there is no time/effort for detention by the Israeli coast guard; Egyptian counterparts are paid off, easily.

The governing party in Gaza controls this illicit trade and this is demonstrated most clearly by the construction of mosques in the Strip. Just north of Gaza City, a new mosque is being erected on the beachfront by Abd al-Aziz al-Khalidi – a dubious businessman and close advisor to the government.

What is revealing here is not so much that Gulf countries support Hamas’ efforts to rebuild Gaza, but rather the absence of any European engagement. Where the EU humanitarian office (ECHO) flag flies proudly on cars and projects in the West Bank, the European emblem is nowhere to be seen in Gaza.

This is disastrous – not for the involvement of Gulf countries (all assistance is welcome) – but for the deepening geographic division this is creating with the other Palestinian territories in the West Bank and Jerusalem, not to mention the increasing political, social, economic distance with Europe.

What reconstruction efforts in Gaza reveal most of all perhaps is Israel’s total closure and disregard for the Strip. The Israeli imposed siege is a way for Tel Aviv to ignore and no longer deal with Gaza. Cutting off the Strip is a way for Israel to punish Hamas – with all the obvious opposite results now.

The two-state solution, as embedded by the Agreement on Movement and Access (AMA), is becoming increasingly difficult to envision. Yet, the AMA stipulates all the necessary clauses to make this possible. Europe was at the forefront of leading that multilateral effort and Gaza was merely the first step towards a solution based on long-term peace with Israel.

The 5 main points of the AMA that desperately need to be revived by Europe are: 1) opening and monitoring the Rafah Crossing, 2) refurbishing the Rafah International Airport, 3) renovating the Gaza City port, 4) ensuring a safe-passage between Gaza and the West Bank, and 5) improving access and movement of people and goods in the West Bank.

Why desperately? Because Europe shares the Mediterranean Sea with Gaza: once a crossroads of trade and travel between civilizations, Gaza now exemplifies a wasted war-zone which pours raw sewage straight into the Mediterranean for lack of material to repair waste water treatment plants properly. If nothing else than for the fish we eat, Europe needs to engage more than ever in Gaza.

Stuart Reigeluth is managing editor of Revolve Magazine and works at the Council for European Palestinian Relations (CEPR) in Brussels. This article was first published by NEW EUROPE ONLINE on December 19, 2011.