Morocco: Arbitrary arrests against demonstrators a black spot on its human rights record 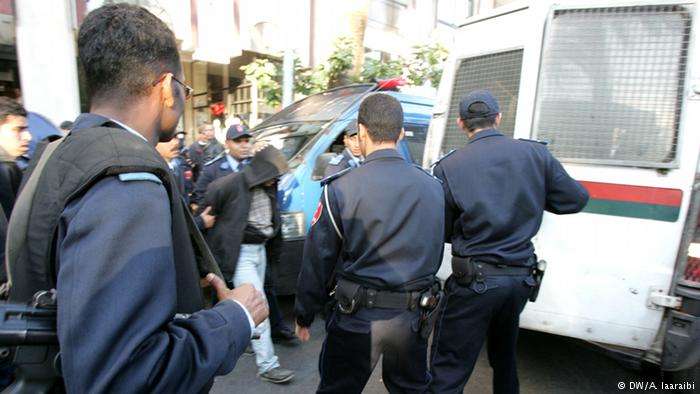 Geneva - The three-month-long repressive arrests by the Moroccan police of demonstrators and activists demanding an ‘economic alternative’ in the face of poverty are deeply alarming, said the Euro-Mediterranean Human Rights Monitor, expressing concern over the dire socioeconomic situation in Jerada, a rural city in northeastern Morocco.

In the recent days alone, cracking down on peaceful protesters in the rural city has resulted in dozens of demonstrators being arrested or injured.

The protest was staged in 22 December following the death of two brothers while working in a coal mine in the rural town. Since then, more than 40 activists have been arrested by the Moroccan security forces while surrounding Martyrs' Square where protesters have been gathering.

The Public Prosecution in the Oujda city referred the activists Mustafa Adanin, Ameen Amqalesh and Aziz Bou Dshish to the trial session in the Court of First Instance on charges of “insulting and committing violent acts against public officials,” but the court decided to defer the verdict until 26 March.

Since Wednesday, March 14, the unrest began to gradually grow more intense in Jaradah city, as demonstrators were surrounded by hundreds of security forces, who attacked a number of them. A young man and a woman was severely wounded as a result, prompting the outbreak of confrontation between demonstrators and security forces.

In December last year, the Court of Appeal in the Al Hoceima city issued verdicts condemning some 20 civil activists for taking part in the Rif Movement (or Hirak Rif) that erupted over a year ago in Morocco’s northern countryside. The massive protests then were sparked by the death of Mohsen Fekri, who was crushed to death in the back a garbage truck where he reportedly threw himself after authorities confiscated the fish he was selling.

The charges against some of the activists may be justified, especially that some 30 members of the security forces have been injured while clashing with protesters, let alone setting fire to the police building in Imzouren town. However, verdicts against these activists are intolerable, further showing disregard to people’s right to expression and peaceful assembly.

Some of these acts must be seen as a reaction to the police suppression of demonstrators. The authorities have shown leniency with the seven people accused in Fekri’s death, sentencing each for a period of five to eight months in prison.

Over 300 people have been detained since the beginning of the crisis, including at least 17 minors, while the Court of First Instance sentenced dozens of them to prison serving different time periods, while others were sentenced to fines ranging between 20 and 500 dollars.

A number of detainees had declared an open hunger strike, protesting violations of their rights in prisons, arbitrary arrests and unjust trials, especially with local reports confirming that detainees in Al Hoceima city were subjected to torture and degrading treatment, thus contradicting Article 22 of the Moroccan Constitution, which affirms that: "The practice of torture, under any of its forms and by anyone, is a crime punishable by the law."

The Moroccan authorities should comply with the provisions of the country’s Constitution, stop targeting civilians and journalists, stop using the judiciary to suppress legally established peaceful dissent, and act quickly to release the detainees, said Yahya Ashraf, Euro-Med’s researcher in North African affairs.

The Moroccan authorities should take the protesters' demands into serious consideration, especially that Jerada City is one of the poorest areas in the country, according to the Haut Commissariat au Plan (HCP) or Higher Planning Commission in Morocco, while the Rif region is known for its high unemployment rate compared to other areas in the country where the unemployment rate is only 9%. The uneven distribution of equipment between urban and rural areas and the lack of development projects in rural areas have produced a fragile economic infrastructure in the countryside.

The Euro-Mediterranean Human Rights Monitor calls on the Moroccan authorities to stop the campaign of arrests and attacks on participants in the peaceful protests, to uphold human rights and bring those guilty of abuses and violations against peaceful demonstrators to justice, while guaranteeing due process and a fair trial for defendants.