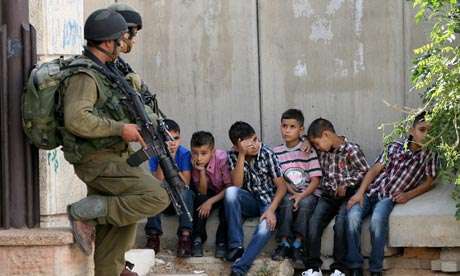 The British government has raised concerns about Israel's treatment of Palestinian minors arrested and interrogated for stone-throwing and other crimes, highlighted in an article in the Guardian.

Alistair Burt, the Foreign Office minister for the Middle East, urged Israel to address the UK government's concerns when on a visit to the country a fortnight ago.

Burt told the Guardian he had "raised concerns about the treatment of Palestinian children in Israeli detention. I urged the Israeli government to address these concerns."

Burt was also asked in the House of Commons last week about the issue of solitary confinement for Palestinian minors. Labour MP Sandra Osborne called on the government to condemn the practice and demand the release of 106 children detained in the Israeli military prison system.

In response, Burt referred to an earlier statement in which he said the practice of shackling children was wrong. Minors are routinely shackled throughout court hearings in the Israeli military justice system.

Osborne told the Guardian Israel's treatment of Palestinian minors was "unjustified in the context of human rights". She had been appalled and distressed on visits to the Israeli military juvenile court at Ofer, near Jerusalem. "No civilised democracy should treat children in that way," she said.

The Israeli human rights group B'Tselem said the state should apply the same protection to Palestinian minors in detention that it allows to Israeli children.

B'Tselem confirmed that descriptions given to the Guardian by Palestinian juveniles of arrest, detention and interrogation under the military justice system were consistent with testimonies it had collected although mostly with over-18s.

"We have also seen long periods of solitary confinement in a small cell, with lights on 24 hours a day, with detainees unable to follow time and disconnected to the rest of the world," said B'Tselem spokeswoman Sarit Michaeli. "We have testimonies of detainees cuffed in painful positions while under interrogation and sometimes left for long periods.

"Throughout the military justice process, the rights of suspects are violated."
B'Tselem, she said, took issue with the claim by Israeli government spokesman Mark Regev that detainees alleging mistreatment would have complaints dealt with fairly. "This is disingenuous at best," she said.

A B'Tselem study last year showed that out of more than 700 complaints of abuse by Israeli Security Agency (ISA) interrogators brought between 2001 and 2011, none resulted in a criminal investigation.

The complaints were examined by an official of the ISA. "It is not surprising that in most cases the inspector determines that the complaint is not true," said B'Tselem.

In a few cases, the inspector found abuse had taken place but the file was closed without the state attorney's office ordering a criminal investigation. B'Tselem said this "transmits a message to … the potential complainants that the chances of measures being taken against the persons responsible is zero".

Regev insisted anyone who had a complaint that an Israeli official had acted in an improper fashion should bring the information to the Israeli authorities and civil courts. "It will be thoroughly investigated," he said.
He added: "Minors deserve special attention, special consideration … The test of a democracy is how you treat people incarcerated, people in jail, and especially so with minors."

B'Tselem said the provisions of Israeli youth law should formally be applied to Palestinian minors. Night-time arrests in military operations should cease; interrogations should be video-taped; minors should be questioned in the presence of a parent or lawyer; they should have their rights clearly read to them; and proper options for remand should be put in place.

Unicef, the UN agency for children, also raised concerns following the Guardian's article. Children had the "right to protection against violence and abuse," it said in a statement. Unicef was "monitoring the arrest and detention of children and is currently in dialogue with the Israeli authorities to improve the protection of child detainees … All children, at all times, must be treated with dignity and respect, in accordance with the convention on the rights of the child."

In the first 11 months of last year, 222 cases of stone-throwers were brought before the military court, according to a letter sent by the Israeli foreign ministry to Lady Scotland, who visited the Ofer court last autumn, and is writing a report on her findings.

The period from indictment to the conclusion of proceedings had dropped to an average of 92.5 days in 2011 from 167 days in 2007, the letter said.

It pointed out that "many crimes carried out by minors in [the West Bank] are of a violent ideological nature and pose a clear and imminent threat to the public … Despite the unique dilemmas in the dealing with minor suspects in [the West Bank], Israel makes significant efforts to provide for just and fair treatment throughout the entire military legal process in accordance with international standards."

Human rights organisations say Israel's treatment of Palestinian minors breaches the international convention on the rights of the child and the fourth Geneva convention.