One Year into Gulf Crisis and Cutting of Ties: Community Peace at Stake and Basic Rights in Jeopardy 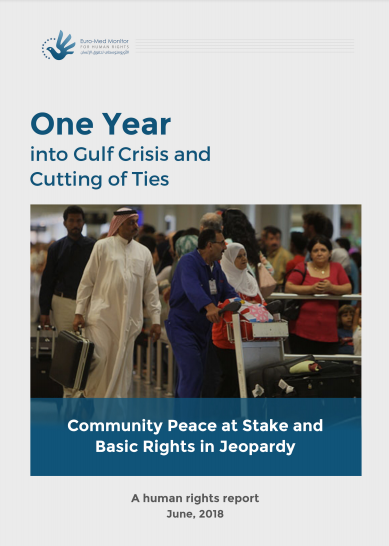 On June 5, 2017, Saudi Arabia, together with the United Arab Emirates, Bahrain and Egypt announced that they have decided to cut all diplomatic relations with Qatar. This decision included banning all trade relations, blocking roads with Qatar and banning all flights to the country. They also ordered their nationals to leave Qatar immediately, and decided to expel all Qatari nationals residing in or arriving to any of the four countries within 14 days of the announcement. The Qatari diplomatic missions were given only 48 hours to vacate their headquarters, with the four countries ordering withdrawal of their diplomatic missions from Qatar. This decision has set out an economic, political, and diplomatic blockade on Qatar.

On the 23rd of the same month, the four countries announced a list of 13 conditions that the Government of Qatar must implement and abide by within 10 days as a prerequisite for ending this ‘boycott’. The list demand includes the closure of Al-Jazeera and other media outlets reportedly financed by the Qatari government, the closure of the Turkish military base in Qatar, the severing of relations with Iran, the withholding of funds to “terrorist organizations”, and cutting ties with Islamist groups such as The Muslim Brotherhood.

One year after the “boycott” decision accompanied by other similar decisions in this respect, the Euro-Mediterranean Human Rights Monitor noted that not only have these decisions failed to take into account international norms and legal instruments regulating relations between States and the Charter of the United Nations, but they also targeted civil rights both in Qatar and in the other four countries.

This set of procedures has had a devastating impact on human rights and community peace in the Gulf, as stated by several reports from United Nations agencies in this regard, including one by the United Nations High Commissioner for Human Rights, which was released in December 2017.

The number of GCC nationals living in Qatar at the time of the crisis stood at 11,327, while the number of Qatari nationals living in other Gulf countries was 1,927. The National Human Rights Committee in Qatar has received more than 2,705 complaints relating to violations of civilian rights since the beginning of the crisis. One complaint may include several individuals or entire families depending on the type of case.

A year after the Gulf crisis began, the Euro-Mediterranean Human Rights Monitor aims to provide a legal framework examining the extent of legality of the measures taken by the boycotting countries under international laws, treaties and customs. Through this report, Euro-Med Monitor also aims to highlight the most important violations that citizens continue to suffer despite that a full year has now passed. Freedom of speech and opinion has been violated, hundreds of families have been dispersed, community peace has been affected, and many serious implications affected the economy, private property, the providence of health care, mobility and the performance of religious rituals.