Xenophobia and Discrimination against Refugees and Migrants in Europe 2018 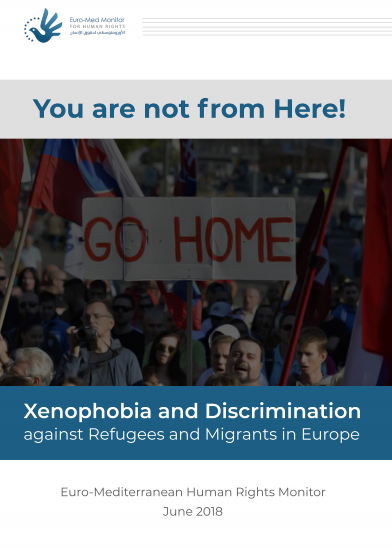 Throughout the recent years, many European countries have granted protection to a lot of refugees and migrants seeking a safe haven in Europe. However, this protection comes with several obstacles and challenges faced by migrants across the EU. These challenges include discrimination and manifestations of racism and xenophobia which continue to threaten security in the increasingly diverse societies of many European countries.Countries across the EU are experiencing discrimination incidents of an increasingly violent nature. Physical assaults, arson attacks and murders have become the sad reality of progressively more diverse societies. More insidious forms of discrimination involve restricting freedom of movement outside of camps, limiting employment rights, or denying the expression of religious identity, such as wearing hijabs. Host governments may also neglect to provide refugees and asylum-seekers with identity documents, such as birth and marriage certificates, which can be needed to access healthcare and apply for jobs, and which may be required for children of refugees to return home.

Much of this discrimination likely has to do with the fear that refugees may take jobs away from EU host country populations. The reality is much more complex, however. While the influx of populations may stress local economies, properly integrated refugees can also represent new markets for goods and services, replenish aging populations, increase tax revenues, and fill unmet demand for labor. Systematically excluding refugees from the formal economy wastes a significant opportunity, while adding more stress to families and protracting dependency on aid.

In this report, the Euro-Mediterranean Human Rights Monitor aims at showing that xenophobia and discrimination against refugees and migrants in Europe is a systematic practice that is on an increase, especially since the critical stage of migration crisis in 2015. Moreover, the report aims at examining the causes behind the rise of this phenomenon.