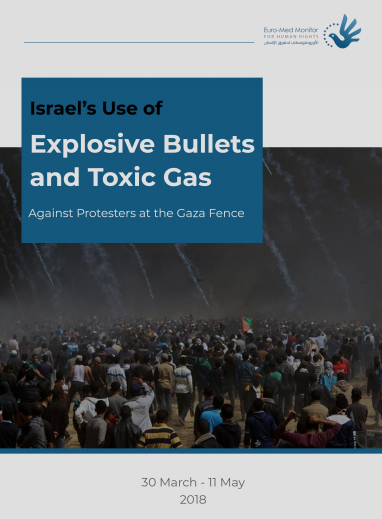 Israel's expected use of excessive force against participants during tomorrow’s intended protest at the Gaza fence may constitute crimes under the Rome Statute, warns a new report released today by the Euro-Mediterranean Human Rights Monitor.

The report calls on all concerned parties to exert all possible effort to ensure the safety of protesters. It further calls on international actors to discuss with the concerned countries ways to overcome the crisis while preserving Palestinians’ right to peaceful protest and assembly, especially given the tight blockade closure of Gaza’s vital crossings.

Euro-Med Monitor’s team gathered testimonies of doctors who treated the wounded as well as testimonies by victims of Israeli army’s sniper bullets and gas bombs.

In its report, Euro-Med Monitor concluded that Israeli forces deliberately targeted large numbers of civilians. In most cases, the target was not a threat to soldiers’ lives stationed at the fence.

The Israeli army deliberately aimed at complicating casualties and inflicting further harm on protesters leading to long-term pain and health issues amounting to permanent disabilities, the report further pointed out.

In the report, the Euro-Mediterranean Human Rights Monitor reiterates calls for an international mission to monitor the ongoing protests in Gaza’s return march and to document Israel’s practices against protesters, especially while demonstrations culminate on Monday, May 14.