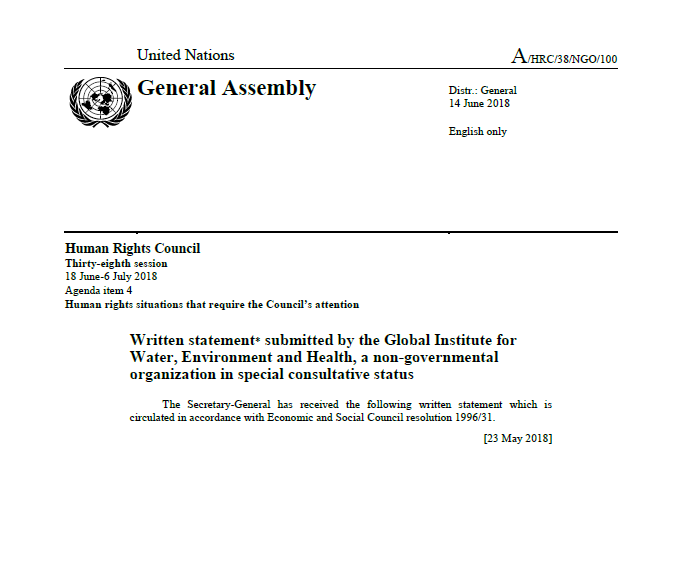 Geneva- Two documents were delivered to the United Nations Human Rights Council by the Euro-Mediterranean Human Rights Monitor and the Global Institute for Water, Environment and Health (GIWEH).

The first document discussed the Israeli checkpoints in the occupied West Bank under item 7 of the Human Rights Council's agenda on the human rights situation in the occupied Palestinian territories.

The second document featured the veto abuse in the Security Council, particularly regarding the Syrian crisis, under the fourth item of the Council's agenda, which is devoted to discussing issues concerning Member States.

The first document detailed the Israeli soldiers' shooting of Palestinians at Israeli checkpoints in the West Bank, highlighting the crippling impact of checkpoints on the daily lives of Palestinians, violating basic human rights, including the rights to freedom of movement, to health care, to freedom of religion, to work and to freedom from collective and indiscriminate punishment.

Field executions by Israeli soldiers during the past years have been rampant at checkpoints in all areas of the West Bank, especially since 2015, following the spread of knife attacks by Palestinians targeting soldiers at checkpoints. Even though in most cases they posed no serious threat to the Israeli army, they were in an arbitrary and excessive manner.

These practices are a flagrant violation of the “Principles on the Effective Prevention and Investigation of Extra-legal, Arbitrary and Summary Executions” (the Minnesota Protocol) adopted by the United Nations General Assembly, which calls for an end to that policy and allowing transparent investigations.

Regarding the situation in Syria, the second document warned that 10 out of 16 Security Council resolutions on Syria have been vetoed by Russia with support from the People's Republic of China.

The paper calls on the United Nations General Assembly to reactivate the “Union for Peace” mechanism adopted by General Assembly resolution 37710, which allows the General Assembly to consider cases where the Security Council has failed to agree on appropriate measures to maintain international peace and security, especially that the number of victims and refugees resulting from the conflict has been rising to unprecedented levels.

The document further calls for a review of the regulations governing the work of the Security Council, namely to discard vetoes of resolutions adopted by a majority of UN members, while also calling for improving and expanding the powers of non-permanent members of the Council.

Document 1: Israel’s shooting of Palestinians at checkpoints in the West Bank

Document 2: Security Council repeated vetoes and their consequences on the human rights situation*