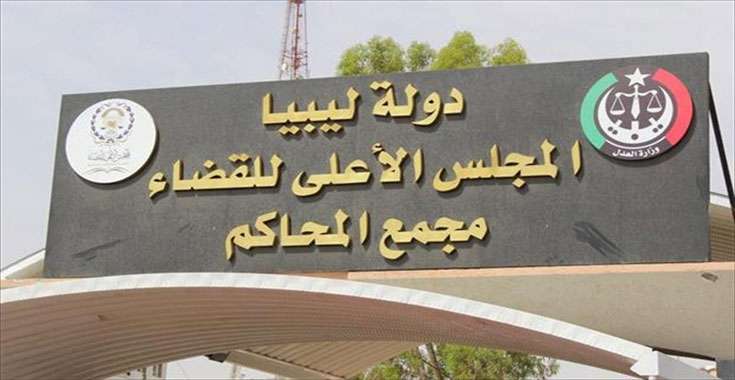 Geneva - The Euro-Mediterranean Human Rights Monitor condemned the oppressive measures taken against Hamza Al Akhdar, the Prosecutor of Tripoli, by the High Judicial Court in Libya, for his criticism of the judiciary in Libya, calling for an end to the corruption plaguing the institution.

A complaint will be filed in this regard by Euro-Med Monitor's Libya regional office to Mr. Diego García-Sayán, the UN Special Rapporteur on the Independence of Judges and Lawyers.

The prosecutor had faced immediate measures to lift his immunity without prior notice or clarification of the reasons, and without conducting an administrative investigation by the judicial inspection before referring the case of lifting immunity to the Attorney General, which is contrary to the Libyan law itself. In addition, the prosecutor was not allowed access to the text of the complaint against him despite repeated requests, nor was he even allowed to defend himself.

In his testimony to Euro-Med Monitor’s team, the Prosecutor pointed out that he had previously been subjected to death threats and kidnappings repeatedly since 2015, following his demand that the judicial institution be neutralized from the political division between the legislative and executive powers in the country. These threats also came after opposition to appointing unqualified members in the judicial bodies, which is contrary to the Libyan law itself.

The Prosecutor and his friends attempted to establish a non-governmental civil rights organization aimed at defending the independence of the judiciary, as guaranteed by the Code of Judicial Conduct 3 of 2008 and the international standards set forth at the Milan Conference in 1958, but they were strongly opposed and rejected by the Supreme Council of the Judiciary, promising that anyone involved in this organization would be punished.

In response to a letter sent by Euro-Med Monitor on June 21 to the Supreme Judicial Council, no details were provided, except for a statement that allegations are being investigated by the Public Prosecutor's Office following a complaint by the Council.

As a result of the measures taken against Al Akhdar, many of his fellow judges and members of the judicial bodies organized several protests in Tripoli, Benghazi, Tobruk, Ajdabia, and Zawiya, expressing rejection to the arbitrary illegal measures taken against him by the High Judicial Council and the committee responsible for lifting his immunity.

This sudden withdrawal of immunity, not allowing the Prosecutor to defend himself, and not informing him about the complaint against him are all violations of the guarantees of a fair trial under Article 14 of the International Covenant on Civil and Political Rights, to which Libya is a party since 1970, said Enas Zayed, a Euro-Med Monitor legal adviser.

The measures taken against the Prosecutor violate the right to freedom of opinion and expression that is guaranteed by the international and Libyan domestic laws. Such measures are an attempt to criminalize and punish the Prosecutor and accordingly prevent him from criticizing the country's bodies and policies, added Zayed, warning that such measures affect the integrity and independence of law.

The measures taken against the Prosecutor for expressing his opinions violate Libyan laws, particularly Article 14 of the Libyan Constitutional Declaration which guarantees everyone’s right to freedom of opinion and expression, said Mousa Al Qunaidi, Euro-Med Monitor's spokesperson in Libya.

The Libyan Code of Ethics and Conduct for members of Judicial Bodies clearly stated in paragraph III, Article 4, that members of judicial bodies “like all citizens, enjoy freedom of expression, thought, and assembly…” In addition, Article 8 of the same Conduct stipulates that members must “avoid concealing facts, truth, or opinion if requested from them."

Since 2011, the Libyan legal system has been getting weaker and is being subjected to gross abuses that affect its independence, Euro-Med Monitor added.

Some other members of the judicial bodies were threatened with death and abduction. This was the reason why some human rights activists and jurists, including the above-mentioned Prosecutor, started expressing rejection to the corruption in the Libyan legal system in order to deliver justice and equality to all.

Euro-Med Monitor calls on the Libyan authorities to stop any arbitrary measures against the Prosecutor, and to fulfil the guarantees of a full and fair trial, in addition to allowing him the right to defend himself and to explain in detail the charges against him, in line with international standards.

The illegal measures of lifting the Prosecutor's immunity do affect the independence and integrity of judiciary, which makes it the responsibility of the UN Special Rapporteur on the Independence of Judges and Lawyers, to whom the Euro-Med Monitor will file a complaint concerning Al Akhdar in case arbitrary measures against him continue.

Euro-Med Monitor further calls for ensuring everyone’s right to freedom of opinion and expression guaranteed by international and domestic laws.

The nonprofit organization also calls on the Libyan authorities, including the House of Representatives, the High Council of State, the Presidential Council and the Minister of Justice, to act promptly to end violations against members of judicial bodies and to neutralize the judiciary, and to protect public rights and freedoms in the country.