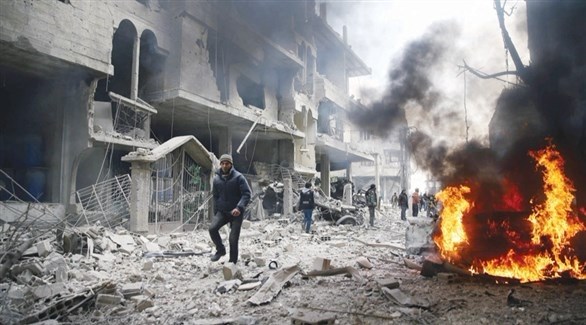 Geneva - Residents of Syrian towns where opposition groups were forced out as part of local reconciliation agreements with the Syrian government have been subject to reprisals, warns the Euro-Mediterranean Human Rights Monitor today.

Violations by members of the government and allied forces have been documented in areas of southern Damascus, Daraa and the countryside, added the Geneva-based Euro-Med Monitor.

Members of the opposition or their families living in these ‘reconciled areas’ have been subjected to different violations including torture, arbitrary arrest, conscription, and restrictions on movement between towns and cities.

The Syrian government concluded mostly Russian-brokered agreements with opposition groups, under which members of the opposition groups would evacuate areas lost to regime control in return for the government’s promise not to harm civilians, said Sarah Pritchett, Euro-Med Monitor’s spokeswoman.

Under these agreements, the government cannot force the enlistment of civilians for military service for a period of six months until they are settled, Pritchett added.

The Syrian army launched an intensive arrest campaign in eastern Ghouta since mid-October. Nearly 50 people were arrested, including women, and were taken to security and intelligence offices in Damascus.

This incident coincided with the government’s announcement that new procedures will be placed to resolve the situation of those who remained in eastern Ghouta, which raised fears that this step would thwart attempts for a real reconciliation.

Areas in eastern Ghouta had earlier been subjected to a similar campaign in order to force young men to join the military service.

Last August, the Syrian army launched a large-scale arrest campaign in the eastern city of Duma to the east of Damascus, in order to force them into the military service only three months after the reconciliation agreement in Ghouta was concluded. This is a violation of the terms agreed upon by both parties, said Pritchett.

Cases of torture have been recorded of dissidents while in shelters. Doctor Moataz Hatittani, who had split from the Syrian army, was arrested by government intelligence forces in Damascus last March. According to Syrian human rights sources, he was taken along with other civilians to a security headquarters and reportedly died under torture.

On October 12, the regular army forces clashed with some armed opposition factions after members of the Syrian army killed a leader of the opposition on the suburbs of western Daraa, despite signing the reconciliation deal.

The army forces in Damascus continue to impose severe restrictions on the movement of residents of three towns south of Damascus, Yilda, Babila and Beit Sahm. These restrictions continue regardless of the fact that about six months have passed since the Syrian government concluded the agreement with the armed opposition at the end of last April.

Complaints from the residents of the three towns indicated that the Syrian army checkpoints prevented thousands of civilian residents from moving outside, even for treatment purposes in Damascus, with the exception of a very limited number and subject to obtaining prior security approvals.

The Syrian security forces use ‘restrictions of movement’ as a means of punishment and retaliation against opponents, especially as relatives of dissidents are being refused entry to Damascus.

The Euro-Mediterranean Human Rights Monitor calls on the Syrian government to work immediately to lift the barriers and allow civilians to move freely between the towns of southern Damascus and other areas in the Capital, especially with regard to the movement of students, staff and patients in need of continuous treatment in Damascus hospitals.

Euro-Med Monitor also calls on member states of the Security Council, particularly Russia as a broker of the agreements, to monitor their implementation by the relevant parties, particularly the Syrian regime, and to prevent any violation of civilian rights in the areas of reconciliation.