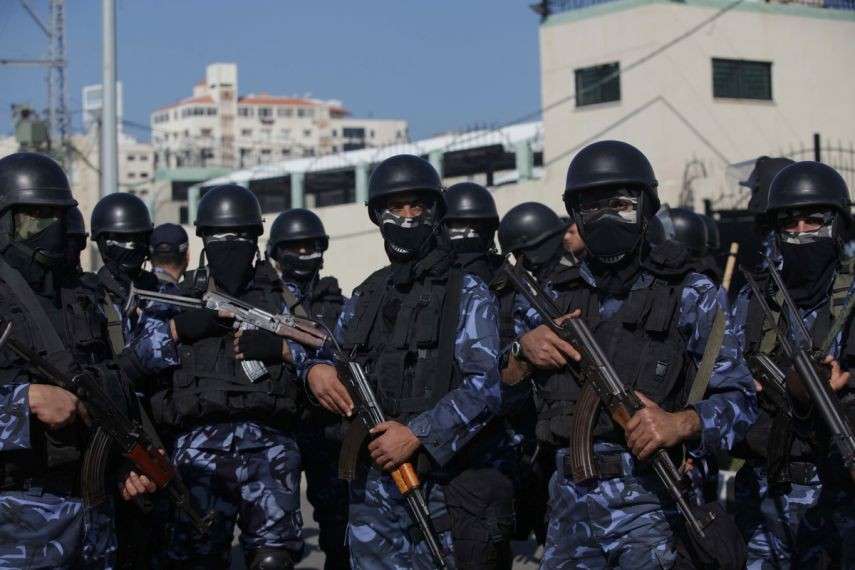 Palestinian territories-The Euro-Mediterranean Human Rights Monitor denounced the attack by the security services of the Hamas authority against citizens in the Gaza Strip who were practicing their right to peaceful assembly, freedom of opinion and expression. The Geneva-based NGO condemned the arrest and summons of dozens of protesters in different areas of the Gaza Strip over the call to demonstrate against poverty and difficult economic conditions.

The International Human Rights group said that its field team-which was present at the scene--monitored the gathering of some 600 demonstrators in the "Trans" area of the Jabaliya Refugee Camp in the northern Gaza Strip in response to calls launched on the internet to protest against the difficult living conditions.

The Euro-Med Monitor explained that the venue of the demonstration witnessed an intense security presence even before the participants gathered at 4:00 PM, where the security forces began to warn the participants of the need to leave the area immediately before masked security forces dressed in plain clothes and carrying batons began suppressing and dispersing demonstrators, detaining a number of them.

The Euro-Med Monitor said that in conjunction with the repression of the security forces, demonstrators loyal to Hamas arrived at the scene of the demonstration and chanted slogans against Palestinian President Mahmoud Abbas without being subjected to security services harassment, while the other demonstrators chanted slogans confirming the peaceful nature of their gathering.

In the same context, the Euro-Med Monitor said that its team had documented in the past two days the detention of at least 10 people arbitrarily, as well as the summoning of others on the background of the calls to participate in the demonstration, by the Internal Security and the General Investigation Services.

In a statement to the Euro-Med Monitor team, Ahmed Abdel Jawad, a resident of the Central Gaza Strip, said that the Internal Security Service sent him a summon in writing on Monday, March 11, 2019 to immediately attend to the headquarters of the security Service in Deir Al-Balah, without explaining the reason for the summon.

"I went at 1:00 PM on the same day I received the summon to the Internal Security Service headquarters in Deir Al-Balah (in the middle of the Gaza Strip), and when I arrived, they explained to me that it had to do with my calls to encourage the youths to take part in the protest on social media sites. After I arrived at the headquarters, I was asked to stand on my feet and raise my hands up, and I stayed like this for about three hours, after which I was interrogated for half an hour, where they asked me questions about the youths movement and who incited it".

Abdul Jawad stated that he remained in detention until the morning of Wednesday, March 13, 2019 where he was conditionally released to attend a university exam at his university, and to hand himself over on Thursday morning.

The Euro-Med Monitor team also documented the arrest of student Islam Abu Eisheh from Deir Al-Balah, where his brother Mohamed reported that the General Investigation Service arrested him on the morning of Wednesday 13 March, 2019 at 10:00 AM from the campus of the Palestine Technical College in Deir Al-Balah. He added: “The police arrested my brother on the background of his calls to participate in the peaceful protest while he was at his university and with the help of the College’s security. He was taken to the Central Prison in the Middle area without obtaining a warrant from the Public Prosecutor's office".

In Gaza City, the Euro-Med Monitor documented the arrest of the two brothers, Abdurahman and Mohammed Al-Majdalawi following their call to participate in the youths movement via the Internet, and they are still in detention, according to their families.

In contact with the Euro-Med Monitor team, Wissam al-Majdalawi, the brother of the detainees said that security officers in plain clothes arrested his brother Abd al-Rahman while he was traveling to receive his salary on Monday, March 11, 2019 on the background of his calls to mobilize, and that his family did not know his whereabouts so far.

Al-Majdalawi said that security officers in plain clothes arrested his younger brother Mohammed from inside his house. He is still detained without informing the family about the conditions of his arrest.

"The ruling authorities in the Gaza Strip are required to respect the right of citizens to peaceful assembly including expressing their political opinions," said the Euro-Med Monitor spokeswoman Sarah Pritchett. "Even if the security services claim that the demonstration did not obtain a permit, this would not allow them to repress or arrest them, and that any action would be arbitrary and in violation of the right to peaceful assembly and to express opinions," she said.

"The failure to follow the required procedures to obtain a license does not constitute a crime, and beatings, arbitrary arrests and threats do not, in any case, constitute penalties in accordance with the law," said Pritchett.

The Euro-Med Monitor called on the authorities in the Gaza Strip to immediately release all detainees and to work to ensure public freedoms for citizens. The Geneva-based group stressed that the policy of silencing people, preventing peaceful demonstrations, and restricting freedom of expression have never been a guarantee to achieve political stability in the society. On the contrary, it is a direct cause of tensions".

The Euro-Med Monitor called on the authorities in the Gaza Strip to urgently deal with the demands of the demonstrators and to address them peacefully by working to provide a dignified life for citizens, especially with regard to living conditions, instead of suppressing protesters and violating their basic rights.