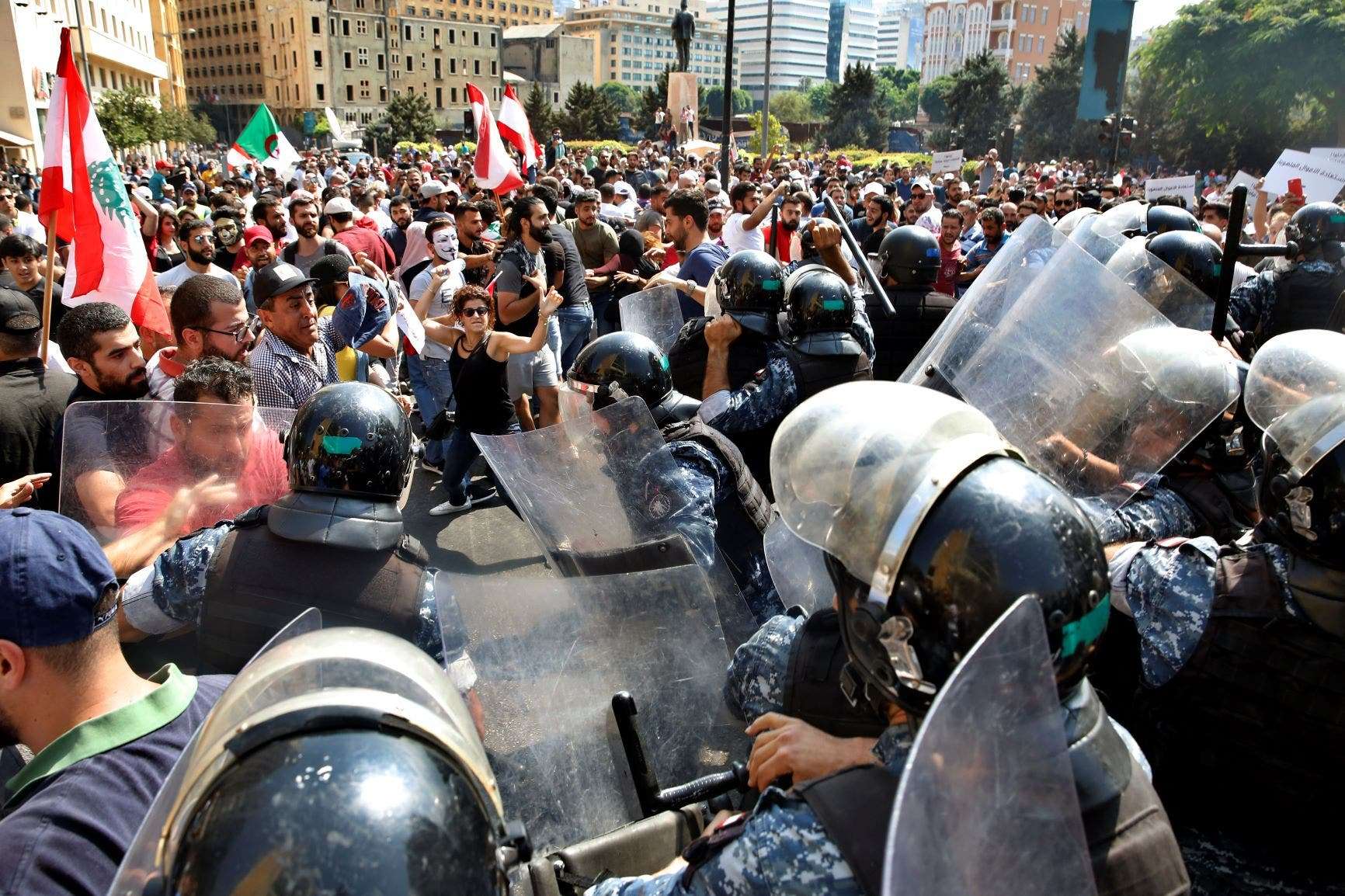 Geneva - The use of excessive force by the Lebanese security services against peaceful demonstrations condemning the deteriorating economic situation in the country constitutes a violation of human rights and a flagrant violation of the freedom of expression guaranteed by Article 13 of the Lebanese Constitution, the Euro-Mediterranean Human Rights Monitor said in a statement on October 1, 2019.

The security forces had dealt with some Lebanese demonstrators in Beirut in an "inhuman and brutal manner", as well as carrying out indiscriminate arrests in the wake of those demonstrations.

On the other hand, the General Directorate of the Lebanese Internal Security Forces issued a statement explaining the incident. The statement said that it would have been better for those who filmed the video to document the full incident and not only part of it and respect the truth, professionalism and human dignity.

The Euro-Med Monitor documented testimonies of three protesters who survived the security forces' assault. They reported that the security forces hunted and assaulted a number of their colleagues using batons, and then arrested them, taking them to an unknown location.

According to these witnesses, the security forces used excessive force to disperse demonstrators who gathered in hundreds in front of the government’s headquarters, Grand Serail, beating a number of them after demonstrators tried to remove the barbed wire separating them from the headquarters.

On Sunday, September 29, hundreds of Lebanese protesters sealed off a number of streets in Beirut with burning tires and barriers. Other demonstrations took place in several cities to protest against the deteriorating economic and living conditions in the country.

The protesters called for combating corruption, adopting reforms, forming a competent government and abolishing the quota system in the country, at a time the Lebanese economy is witnessing a sharp decline, which prompted the parliament to adopt a deficit budget in an attempt to reduce the public deficit.

"The Lebanese authorities should have respected the rights of the demonstrators and listened to their demands instead of using excessive force that violates human rights standards," said Mohamed Imad, Euro-Med Monitor's legal researcher.

"It is sad to see four security personnel beating one person with their feet and batons relentlessly, only because he was taking part in a demonstration demanding stopping corruption and adopting reforms in the country," he added.

lmad pointed out that the attack on protesters is a clear violation of the Lebanese Constitution and Lebanon's international obligations, especially Article 21 of the International Covenant on Civil and Political Rights, which Lebanon ratified in 1972.

The Euro-Mediterranean Human Rights Monitor stressed that the UN Basic Principles on the Use of Force and Firearms provide that law enforcement officials may use force only if other means are ineffective or won't achieve the desired result.

The Euro-Med Monitor called on the Lebanese authorities to open an immediate and impartial investigation to ensure accountability for anyone who used excessive use of force, including the assault on some demonstrators. The Lebanese Parliament should hold the Minister of Interior accountable for the recent attacks against demonstrators and should end the use of force against protesters in light of the deterioration of economic and living conditions in the country, the organization added.