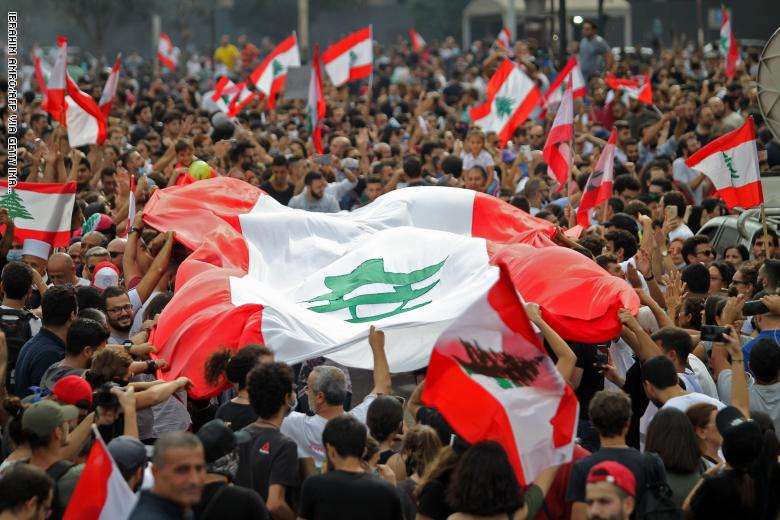 Geneva - The Euro-Mediterranean Human Rights Monitor urged the Lebanese government to take all feasible measures to protect peaceful protestor and to respond firmly to attacks by groups affiliated with political parties that aimed at dispersing demonstrations and sit-ins in different parts of the country.

The Geneva-based Euro-Med Monitor said in a press statement that it was deeply concerned by the failure of the security forces and the army to protect a gathering of protesters from a violent attack with stones and sharp tools by one of these groups in central Beirut at Sunday night.

According to the field follow-up, the demonstrators were attacked by young men belonging to some anti-protests’ parties. The attackers hurled insults against the demonstrators, and chanted slogans in support of prominent political figures, while the protesters responded by chanting the Lebanese national anthem and other popular slogans.

The Euro-Med Monitor viewed footage on social media showing the two sides throwing stones and setting fire to a motorcycle before some Lebanese army personnel intervened forming a barrier separating the two sides on the main Ring Road Bridge in central Beirut.

The Euro-Med Monitor said that the attacking groups not only did so, but also went to the center of Beirut, and demolished dozens of tents at the Martyrs and Riad El Solh Squares, which have gained great symbolism since the outbreak of the protests on October 18, breaking cars and private property in the surrounding streets of the Ring Bridge.

Hundreds of demonstrators on several main roads called on Monday to protest against the Lebanese President Michel Aoun's failure to set a date for naming a new prime minister after Prime Minister Saad Hariri resigned under street pressure on October 29.

On Saturday evening, the Lebanese security forces arrested five youths, including three minors, for removing a banner of the party of the President of the Republic of Lebanon east of Beirut and released them later, according to lawyers, following a wave of angry criticism.

Anas Aljerjawi, the director of the Middle East and North Africa at the Euro-Med Monitor said, “This is not the first time that party groups have attacked demonstrators demanding the departure of the whole political system, holding officials accountable, recovering looted funds and abolishing sectarian quotas."

Aljerjawi added that the security forces and the army should work to protect the protesters, to protect them from party groups, and release detainees unless convicted of any violation.

The Euro-Med Monitor affirmed that any attack on protesters by these groups and inaction by security forces or individuals is a clear violation of the Lebanese Constitution and Lebanon's international obligations, especially Article 21 of the International Covenant on Civil and Political Rights, which Lebanon ratified in 1972.

The Geneva-based organization stressed that the United Nations Basic Principles on the Use of Force and Firearms (Basic Principles) provided that law enforcement officials could use force only if other means were ineffective or it was not clear that they would achieve the desired result.

The Euro-Med Monitor called on the Lebanese authorities and army to take all possible measures to ensure the protection of protesters, respect their right to freedom of assembly, and work hard and firmly to prevent repeated attacks by party groups on peaceful demonstrators and sit-ins.