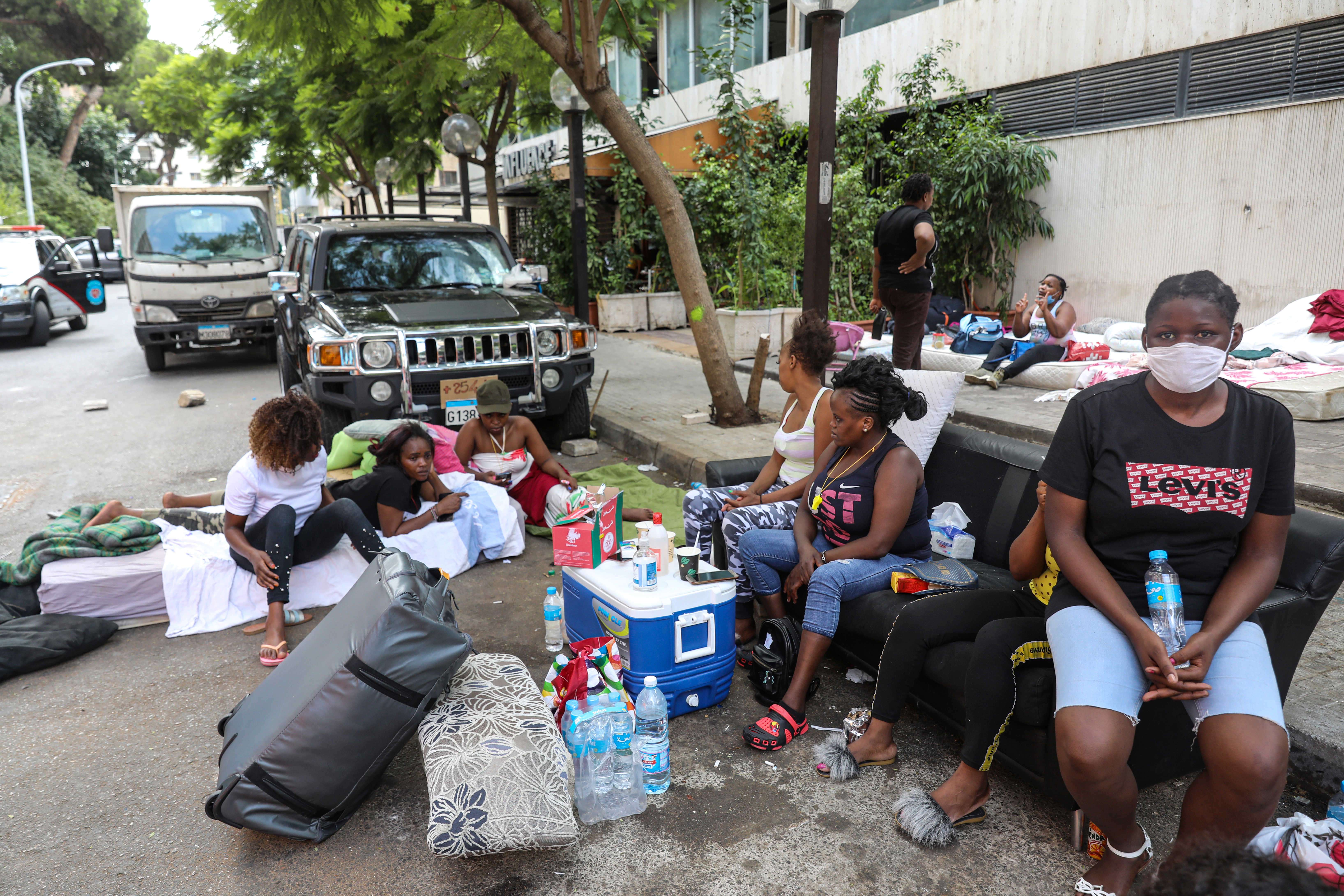 Geneva - The absence of governmental measures to protect foreign domestic female workers in Lebanon has exacerbated their conditions in light of the outbreak Coronavirus pandemic and the severe economic crisis in the country, the Euro-Mediterranean Human Rights Monitor said in a statement on Friday.

Lebanese families expelled dozens of Ethiopian female workers and left them near their country’s consulate, facing an unknown fate as they lacked choices due to the closure of airports and the disruption of travel due to the pandemic.

Dozens of Ethiopian workers have been sleeping in front of the headquarters of their country's consulate in the al-Hazmiyeh suburb of the capital Beirut, after their employers abandoned them. Making things worse, the Ethiopian consulate in Lebanon demands those who want to return to their country to pay the expenses of the 14-day-quarantine at Addis Ababa hotels, which costs more than $770, five times double their salary in Lebanon.

Workers said that they were arbitrarily expelled on the grounds of the economic crisis and families’ inability to pay their salaries in US Dollar or even in Lebanese Lira as a result of the huge rate difference.

Workers complained that they had not received their salaries for a period of 1-4 months, while their employers refused to provide them with any shelter, as some of them slept in front of their country's consulate without taking into consideration their difficult conditions.

Many employers pay the salaries of foreign workers in Lebanese Lira since one US Dollar equals 1500 Liras. However, the current rate in the market exceeds 4,200 Lebanese Liras per one US Dollar. The salaries of domestic workers are among the lowest in the country because they are excluded from the Labor Law, thus workers don’t get the minimum wage. The Syndicate of Owners of the Workers Recruitment Agencies in Lebanon emphasized that the payment must be in US Dollar, in line with the contract signed between the Lebanese party and domestic workers, noting that foreign workers should not pay the price for the collapse of the Lebanese Lira.

The Lebanese Anti-Racism Movement said there are 161,311 Ethiopian regular women workers in Lebanon, in addition to about a thousand irregular workers who were forced to violate residency conditions because of the nature of the sponsorship system which makes their lives harder.

Many workers suffer abuses and violations on daily basis. During 2019, at least 36 female Ethiopian workers died in Lebanon according to unofficial remarks issued by the Ethiopian consulate in Lebanon, while the real number is likely to be much higher.

Protecting the rights of Ethiopian domestic workers and other foreign nationals in Lebanon is very difficult because they are excluded from the Lebanese Labor Law under Article 7. Lebanon, at the international level, has only agreed to the International Labor Organization Convention No. 189 on Decent Work for Domestic Workers, approved in June 2011, but it has yet to take steps to abide by the Convention.

The Convention requires governments to provide domestic workers with labor protection measures equal to those of other workers, closely monitor employment offices, and provide measures to protect workers from violence.

Although Lebanon has not ratified the International Convention on the Protection of the Rights of All Migrant Workers and Members of their Families (CRMW), it has ratified many human rights agreements that include provisions for protecting workers in general and foreign workers in particular.

The only regulatory framework available for this category is the individual contract model that Lebanon adopted in 2009 due to the intense pressure exerted by NGOs. Yet, the absence of legal measures allows Lebanese employers to continue illegal practices and violations against domestic workers.

Despite its flaws, the standard employment contract approved by the Lebanese Ministry of Labor guarantees many basic rights for foreign workers in Lebanon. The most important of which is the right to work in a clean and safe environment, preserve the privacy of the worker, have access to health care and to obtain private health insurance that covers the costs of emergency accidents and hospitalization, and to have legal leave and awork residency renewed annually at the employer's expense. The contract gives workers the right to have a return ticket to their country when the work contract expires or ends at the employer's expense. In addition, the contract guarantees the right to obtain off hours a day in addition to weekly and annual holidays. Most importantly, it allows them to get wages in the currency mentioned in the employment contract.

“The Lebanese Ministry of Labor should put practical solutions in the event of any dispute over the employment contract by taking the necessary measures against the employer in case of breaching the contract or failing to fulfill its obligations,” said Euro-Med Monitor’s legal advisor, Tariq Hajjar.

Hajjar pointed out that while failing to address the situation of Ethiopian women workers, the Lebanese government, especially the Ministry of Labor and Public Security, should take immediate actions to find appropriate solutions to protect Ethiopian workers in Lebanon and to stop employers’ arbitrary dismissal of workers, which means leaving them in the street facing an unknown fate.

“There is an overwhelming need to implement relevant laws in a serious and strict manner through enforcing the obligations of employers mentioned in the employment contracts and imposing fines on those who violate them,” Hajjar added. “Employers should pay for the expenses of workers’ accommodation, decent living, and travel, while the government should cancel all fines imposed on workers and facilitate their return to their home countries,” he noted.

The Lebanese authorities should act immediately to bring justice to Ethiopian female domestic workers and other workers in the country and it should never tolerate violations related to their rights such as unpaid wages, abuse, dismissal, or leaving them homeless, the Euro-Med asserted.

The Lebanese government should extend the Labor Law to include domestic workers, investigate violations of their rights, reform the sponsorship system, and sign the International Labor Organization’s Convention on Domestic Workers to protect the rights of domestic workers, and ratify the new protocol of the ILO Convention No. 29 on forced labor.

It is estimated that there are more than 300,000 foreign domestic workers in Lebanon from Africa, South Asia, and Southeast Asia.

The sponsorship system in Lebanon exposes migrant workers to restrictive laws that do not allow them to quit or change their work without the sponsors’ approval. This system makes the sponsors bear legal responsibility for foreign workers and thus gives them a great control over the lives of workers who are often subjected to exploitation, abuse, and ill-treatment.