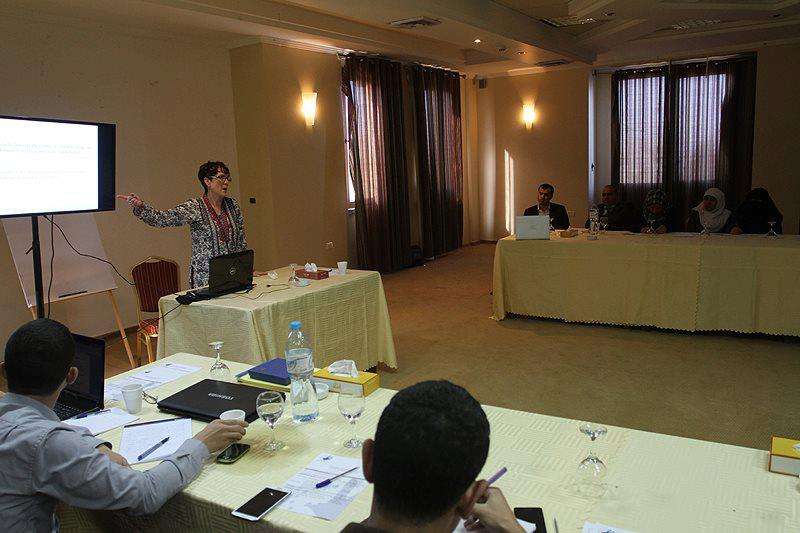 Euro-Med Monitor for Human Rights held a workshop, in Gaza city, on the role of social media in fostering human rights, particularly within Palestinian territories.

The workshop was arranged by Euro-Med Monitor's regional office on Thursday, Dec. 6th at al-Mathaf hotel in Gaza city. It focused on the means of adapting Palestinian media discourse in a way that fits the widespread media discourse in western countries bringing about real changes on the ground, and lobbying decision makers for taking better stands towards the Palestinian cause.

The participating Journalists and media workers studied the relationship of Palestine with EU countries, and the key features to effective pro-Palestinian discourse in the EU arena. On top of that, they examined the Palestine-US relationship, stressing the special distinction between the EU and US ties with Palestine, and highlighting influential discourses in both arenas.

The day-long workshop was inaugurated by Chairman of Board of Directors of Euro-Med Monitor Dr. Ramy Abdu welcoming the 30 participating social media activists saying they were selected "to start a new working core that could contribute to forming new pro-Palestinian lobbies, taking the responsibility of exposing the heinous Israeli crimes against humanity inside the Palestinian territories."

More importantly,Euro-Med Monitor hosted the well-known American writer and journalist Pam Bailey who delivered a presentation on the mentality of American society, and how address Americans about Palestine, and especially Gaza. To illustrate more, Pam shed light upon the Americans' reaction regarding Middle East issues, and the Palestinian-Israeli problem in particular. At the end of her presentation, Bailey recommended Palestinian activists to boost their interaction with western writers and journalists, and get them to know the truth more clearly, focusing of Israeli crimes against civilians and children, so that they can win them on the Palestinian side.

As for the EU-Palestinian ties, Mr. Ramzi Hasouna of the CEPR talked about the history of the Palestinian relationship with EU countries. Hasouna underlined CEPR's own experience in effort to reinforce both popular and official solidarity and support for Human rights issues in Palestine.

Professor AKram Habeeb, on his part, lead a session on how to present and promote ideas properly engaging the workshop members in many practical activities in which each group tried to present its message in their own way. Habeeb, also, stressed the need of accuracy, quickness, and realism in transmitting the news and events using social media networks.

It is worth mentioning that Euro-Med Monitor announced the workshop, which was held at al-Mathaf Hotel, as the start of a series of training activities that Euro-Med Monitor is planning to conduct in the near future, with the aim of enhancing the culture of human rights media within Palestinian territories.