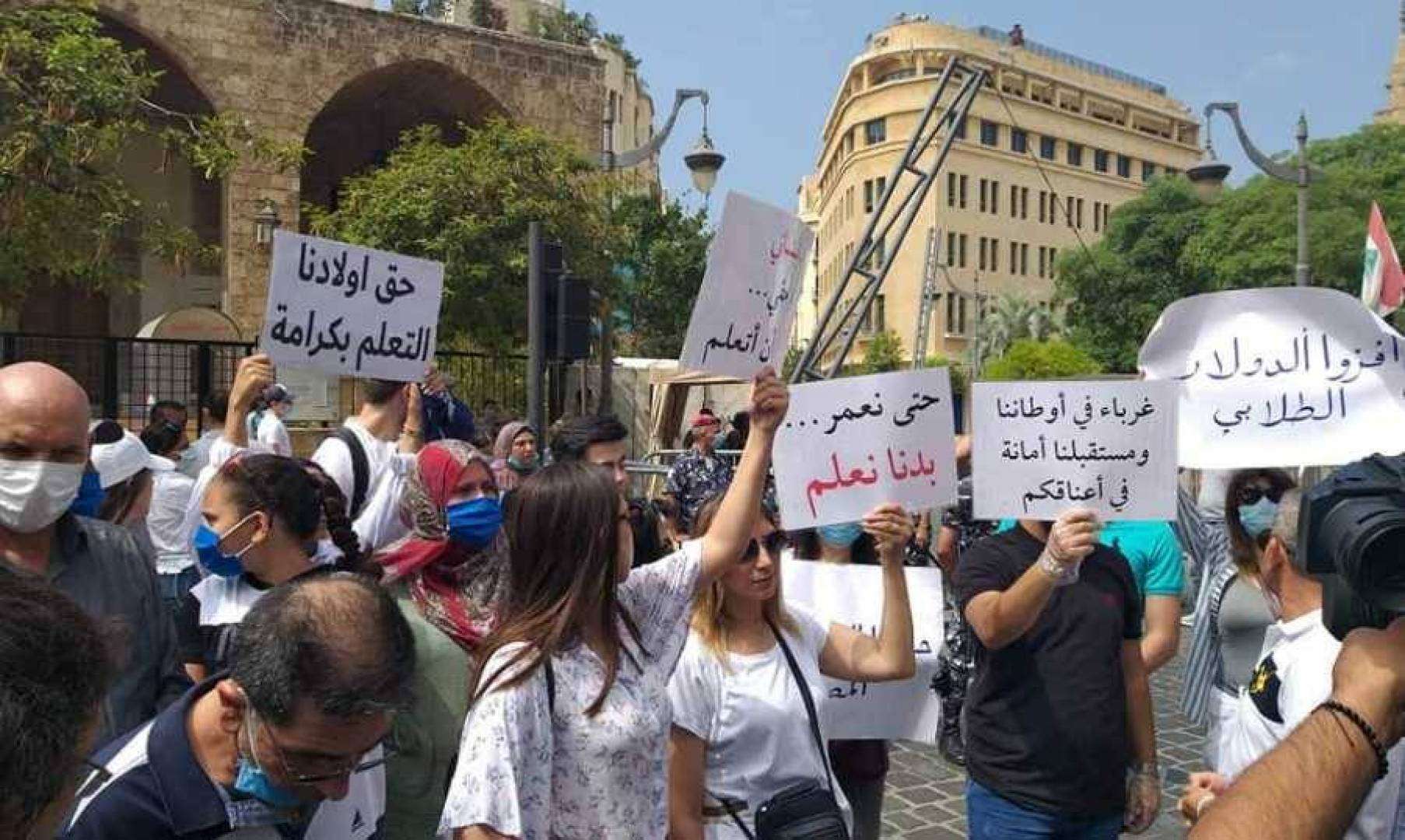 Geneva – The Lebanese security forces crackdown on a sit-in by Lebanese expatriate students’ families in front of the Central Bank of Lebanon is an unjustified abuse, the Euro-Mediterranean Human Rights Monitor said in a statement on Thursday, stressing that attacking the sit-in is a serious violation of the students’ right to education, which the Lebanese Constitution and relevant international agreements and conventions guarantee.

Euro-Med Monitor stated that on Tuesday, November 3, 2020, the students’ families organized a sit-in in front of the Central Bank of Lebanon on Hamra Street in Beirut, due to restrictions imposed on foreign currency transactions. They demanded the Governor of the Bank of Lebanon, Riad Salameh, to issue the necessary instructions to the banks operating in Lebanon to apply Law No. 193/2020, which stipulates that banks are obliged to allocate 10,000 US dollars, based on the official exchange rate of the US dollar, for expatriate Lebanese students who have been outside the country before the academic year 2020-2021.

Euro-Med Monitor added that families went to the main gate of the Central Bank of Lebanon, trying to break in to meet the Governor or one of the officials there, with the Internal Security Forces preventing them from doing so.

In a testimony to Euro-Med Monitor, member of the Lebanese Association for the Parents of Students in Foreign Universities, Dr. Rabei Kanj stated “Since the adoption of the students’ law, like all expatriate students’ parents, I have not been able to send money to my son. The association warned against a major crisis because of stoppage of transfers. Consequently, parents went in front of the bank, demanding it to solve the crisis and apply Law No. 193/2020. However, no one came out to speak with us.”

Euro-Med Monitor considered the restrictions on transactions to pay educational installments and living expenses a serious violation of the right to education, which the Lebanese Constitution and relevant international conventions guarantee. Paragraph (b) in the Lebanese Constitution affirms that Lebanon is committed to all international covenants, guaranteeing the right to education. Also, Article 18 in the Universal Declaration of Human Rights (UDHR) and Article 13 in the International Covenant on Economic, Social and Cultural Rights (ICESC) stipulate this right as one of the basic rights and prohibit its violation.

Muhammad Fayyad, a Lebanese studying public health in Ukraine, told Euro-Med Monitor: “The (US) dollar crisis represents a big problem for me on the academic level. I am threatened with expulsion from the university for not being able to pay the tuition fees on time. The university, where I study along with a group of students, informed us that if we do not pay the fees, we would be expelled. Moreover, failing to pay on time will increase the payment charges on us. The biggest problem is that it is difficult to complete our studies in Lebanon due to the different educational programs and curricula between the two countries. All of this is because of the banks’ lack of commitment to implement the students’ law."

The currency crisis began in mid-2019 in Lebanon, when banks operating in Lebanon, at the behest of the Central Bank of Lebanon and the Association of Banks, began to place illegal restrictions on transfers in foreign currency abroad, as well as tight restrictions on local withdrawals in foreign currencies until they completely stopped giving US dollar in February of 2020.

Zakaria Haydar, a sophomore navy student in Odessa, Ukraine, told Euro-Med Monitor: “Odessa is the only city that has the department I study at. The cost of living is high. Previously, my family used to send me nearly $600 a month, and they were enough to pay the monthly expenses of the university rent and installments, but the dollar crisis affected my educational life, as I only receive 300 dollars a month now, which is not enough except to pay my rent. I am unable to pay the university tuition fees for this academic year. The university warned me that I would be expelled even though I am the best student in my department".

“Banks continue to violate the law without any basis,” warned Tariq Hajjar, Euro-Med Monitor’s legal advisor, adding, “this would lead to serious consequences and Lebanese students abroad might lose the current academic year if they fail to pay fees or cover their essential living needs.”

All concerned authorities in Lebanon, especially the governor of the Central Bank of Lebanon, since he has big powers in this regard, should do what is necessary to secure the needed mechanisms to implement Law No. 193/2020 to protect the rights of Lebanese students abroad to education, compensate any damage they suffered, and firmly confront banks' abuse and persistent violations of the Lebanese law.