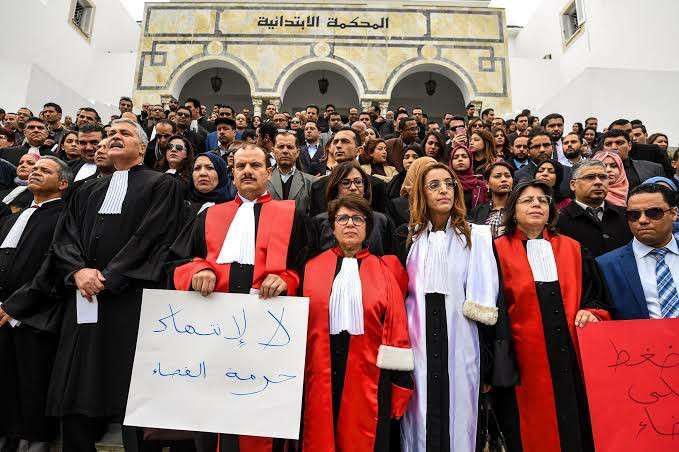 Geneva – The Euro-Mediterranean Human Rights Monitor called in statement today on the Tunisian government to respond to the demands of judges on strike to protest their unfair working conditions.

Judges in Tunisia have been on a strike since November 16 to protest against working conditions at courts during the Coronavirus pandemic, demanding reforms related to their living conditions and the judicial system that suffers from clear deficiencies in many pivotal aspects.

The strike came after the negotiations between the Judges Syndicate and the government were halted. The negotiations were based on four main demands: 1) providing protection and health care equipment for judges and their families, ensuring the sterilization of courts, and establishing a health protocol that protects judges, litigants and all workers, administrators and citizens; 2) enforcing an effective justice system at courts that live up to international standards and the required level of judicial service provided to citizens; 3) providing judges with physical conditions consistent with international standards; 4) enacting fundamental reforms in the judiciary system.

Member of the Administrative Board of the Tunisian Judges' Syndicate, Judge Hussein Qaryoua said: "the move by judges shouldn't be a surprise. The Judges' Syndicate sent numerous correspondences to the Presidency of the Republic, the head of the Government and the Assembly of the Representatives of the People of Tunisia to protest the difficult living conditions experienced by judges, such as low wages and the remoteness of work from places of residence, in addition to the lack of good health insurance in light of the Coronavirus pandemic and the negligence of the Ministry of Justice to observe health protocols."

"The crisis escalated after two judges died from the Coronavirus as a result of the competent authorities’ negligence to apply the health instructions and necessary preventive measures. This prompted us to hold a meeting attended by a thousand judges after which we decided to initiate a strike for a period of five days, starting on November 16, 2020. Five days later and with no progress made; we extended the strike for another five days.

"The government attempted more than once to hold a formal meeting to call off the strike, spurring us to begin a longer strike that is still ongoing. The Association of Tunisian Judges is the legal representative of Tunisia's judges and is authorized to declare or suspend the strike in accordance with the provisions of the law."

The Tunisian Judges' Syndicate denied it suspended the strike after the government announced a consensus formula, drafted with the Association of Tunisian Judges, the representative body for judges before the revolution of 2011. In a joint statement, on December 19, with the Union of Judges of the Court of Auditors, the Association of Tunisian Women Judges, and the Union of Administrative Judges, the Tunisian Judges' Syndicate stated that "The unilateral agreement concluded with the Secretary-General of the Government was unanimously rejected, for it is contrary to the will of judges and does not respond to the legal requirements, which require that such agreements shall be signed by the most representative trade-union judicial structures. "

According to Quraywa, the number of judges who rejected the government’s agreement with the Association of Judges reached 2,000 out of 2,300. 1,500 out of the 2,000 signed a petition that rejects the agreement the Tunisian government announced.

"The parties unanimously called on to find a consensus formula based on the primacy of the general interest, to ensure the full realization of the judges’ rights, and to draw up a detailed timetable that guarantees the implementation of their legitimate demands," said Mohammed Imad, Euro-Med Monitor’s legal advisor. "It is important that the executive and the judicial authorities collaborate to establish an outline for professional programs and plans that will ensure the sound functioning of the judicial authority and fill the gaps that may affect the authority’s work."

"The government’s procrastination in responding to the judges’ lawful demands means prolonging the litigation period and losing the rights of thousands of people, which go against the constitutional and judicial principles." Tunisia’s Constitution stipulates in Article 109 that "All kinds of interference in the functioning of the judicial system are prohibited." Article 114 stipulates that "The Supreme Judicial Council ensures the sound functioning of the justice system and respect for its independence."

The Tunisian government and the official representatives of the judiciary should put an end to the attempts to circumvent their demands, which Tunisia’s Constitution and international law guaranteed. If satisfactory solutions were not found this will lead to the continuation of the strike which will deprive people of their guaranteed rights and will bring about unforeseen implications.

On December 24, the Tunisian government and the Judges Syndicate reached an agreement to end the strike the judges have started since the middle of November, protesting against the unfair working conditions, especially during the COVID-19 pandemic. On December 23, Euro-Med Monitor addressed the Tunisian government to respond to the demands of judges, stop stonewalling in resolving the crisis, and paving the way for justice.