Israel has a legal and moral responsibility to vaccinate Palestinians 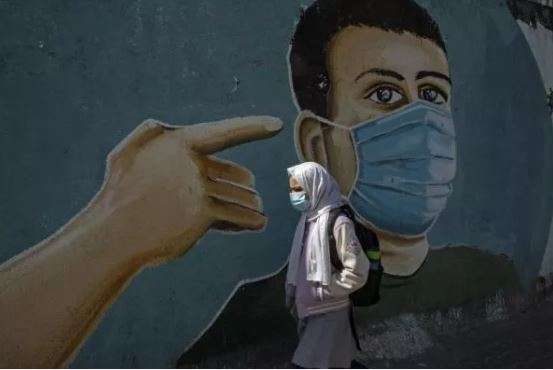 Israel has been receiving international plaudits for its record-setting COVID-19 vaccine rollout. An enviable 60 percent of Israelis have gotten at least one shot. But I belong to the population that can't celebrate this remarkable campaign: I am a Palestinian from Gaza. Conspicuously absent from the five million Israelis lucky enough to get the vaccine were Palestinians living under occupation in the West Bank and under military blockade in the Gaza Strip.

But if a Palestinian living in the West Bank under Israeli military occupation, or living in Gaza under Israel's punishing military blockade, presented himself to the nearest Israeli checkpoint without proof that they worked in Israel and requested a vaccine, they would be turned away.

But an equally vigorous campaign to defend Israel soon countered, arguing that under the Oslo Interim Accords, the 1995 agreement signed by Israel and the Palestinian Liberation Organization, the Palestinian Authority has oversight over public health; it was a point Israel's health minister made to the BBC recently.

This is true: Oslo II renders the Palestinian Authority responsible for vaccinating its population. It states clearly that "powers and responsibilities in the sphere of Health in the West Bank and the Gaza Strip will be transferred to the Palestinian side," which will "continue to apply the present standards of vaccination of Palestinians and shall improve them according to internationally accepted standards in the field." But this provision is only for old and known diseases; it makes no mention of new diseases.

It is elsewhere in the agreement that new illnesses come up: Item 6 of article 17 stipulates very clearly that when it comes to new diseases, "Israel and the Palestinian side shall exchange information regarding epidemics and contagious diseases, shall cooperate in combating them and shall develop methods for exchange of medical files and documents." And in this, Israel has clearly fallen short.

It takes quite a bit of chutzpah to call upon the Oslo Accords as proof that Israel bears no responsibility for combatting a pandemic in the Palestinian Territories, when it is Oslo that demands the exact opposite. Perhaps it's not surprising, though; Israel has been consistently violating Oslo on other fronts, too, for example, by preventing Gaza and the West Bank from being a "single territorial unit."

But there is a law higher than the Oslo Accords that demands that Israel take responsibility for the Palestinian lives it controls: the Geneva Convention. For the fact of the matter is, millions of Palestinians are living under Israeli military rule. In the West Bank, Israel maintains checkpoints, military courts, draconian military orders, army incursions and ultimate authority over land distribution in the majority of the West Bank. It is the ultimate arbiter of the movement of individuals and goods. In the besieged Gaza Strip, Israel maintains control over the airspace, territorial waters and land crossings, where it decides what and who gets in or out of our beleaguered enclave.

This constitutes a belligerent military occupation and renders Israel an occupying power, according to the United Nations Security Council, the International Court of Justice, and even Israel itself; as the hardcore right-wing Israeli prime minister Ariel Sharon himself put it in 2003, "You may not like the word, but what is happening is an occupation. To hold 3.5 million Palestinians under occupation, I believe that is a terrible thing for Israel and for the Palestinians."

Maintaining an occupation comes with responsibilities clearly defined under international humanitarian law regarding the health and wellbeing of the occupied population, and these very clearly include undertaking "prophylactic and preventive measures necessary to combat the spread of contagious diseases and epidemics."

The implication for our purposes is clear: Israel is responsible to combat the spread of COVID-19 in the Palestinian Territories, in no uncertain terms. As U.S. Senator Bernie Sanders put it, "As the occupying power, Israel is responsible for the health of all the people under its control."

And so long as Israel maintains its military occupation over Palestinians, using state power and military courts to adjudicate our lives and regulate our movement without giving us the right to vote, the Geneva Convention outweighs the Oslo Accords, or any other agreement Israel may sign with a subservient authority under its occupation. On this, too, the Geneva Convention is clear, stressing that its protections may not be denied "by any agreement concluded between the authorities of the occupied territories and the Occupying Power," nor can an authority "renounce in part or in entirety the rights secured to them by the present Convention."

But skeptics of international law can look closer to home. By Israel's own laws, it is responsible for vaccinating Palestinians, something we can learn by analogy. During the 1991 Gulf War, Israeli courts ordered the military to distribute gas masks to Palestinians living in the West Bank and Gaza to protect them from scud missiles from Iraq. "The military commander should treat everybody with equality," the court ruled. "He must not discriminate between residents. Once the military commander came to the conclusion that protective kits should be distributed to the Jewish residents of the area, he should also distribute kits to the Arab residents." Based on that precedent, once Israel made vaccines available to Israeli settlers living in the West Bank, it had the same responsibility vis a vis the Palestinians living there. Similarly, in a 2008 case about limiting the supply of electricity to Gaza, Israel's Supreme Court found that Israel has "a duty to ensure the safety of the civilian population" in Gaza, and to protect "its dignity and basic rights."

This standard is clearly being flouted in the case of coronavirus vaccinations.

Some have defended Israel by arguing that the Palestinian Authority rejected Israel's help with vaccinations. But this, too, is not quite accurate. It's true that the PA refused medical aid from an Emirati plane that landed in Israel's Ben Gurion in May 2020, calling it "cover for normalization." But that was six months before the vaccine was available. In another incident, the PA refused 20 experimental doses from a private Israeli pharmaceutical company—a perfectly defensible decision. But there has been no incident where Israel offered help with vaccinations and the Palestinians said no. In fact, the PA reportedly asked Israel for 10,000 vaccines in January for medical workers, a request Israel denied, though Israel did provide them with 100 doses.

You might ask why the PA can't just buy its own doses. Why is it Israel's responsibility to supply them? It's a fair question. But the answer is simple: Because Israel bears at least partial responsibility for the sorry state of the Palestinian economy. According to approximations by UNCTAD, the direct fiscal cost of Israel's occupation between 2000 and 2017 was an astonishing $48 billion. In Gaza, UNCTAD estimates that the blockade has cost Palestinians $16 billion between 2007-2018. So while the $1.4 billion deficit the PA incurred due to the pandemic cannot be solely blamed on Israel, the occupation and blockade have major fiscal costs that exacerbate our economic woes on all fronts.

I don't believe that Israel is intentionally trying to do us harm by denying us the vaccine. But I am arguing that Israel's refusal to vaccinate the Palestinians who live under its control represents a missed opportunity to do an enormous amount of good.

Indeed, it is the moral claim that is strongest one here. Forget all the legal arguments: We are your neighbors. We are your fellow humans. Do you really wish to see us perish at the hands of this malevolent virus that should be reminding us all of our common humanity?

And Israel has the vaccines to spare; it purchased 24 million doses—10 million AstraZeneca, 8 million Pfizer, and 6 million Moderna. Moreover, we know that Israel is open to the idea of sharing its surplus vaccines; the government's vaccine rollout was extended to diplomats, foreign workers and asylum seekers and a few friendly nations. Israeli Prime Minister Benjamin Netanyahu even purchased un undisclosed number of vaccines for Bashar Al-Asad's regime in Syria, as part of a prisoner swap.

Can Israel not spare its remaining vaccines for those of us living so close by, watching as Israelis return to cafés and bars and gyms and to work? Can it not spare some compassion for more than just the two percent of Palestinians living in the Territories who come in contact with Israelis?

To us, it would represent a break from the vicious cycle of mutual mistrust and hatred. It would demonstrate morality, empathy, kindness, and common sense.

Imagine the news headlines were Israel to decide to vaccinate its Palestinian neighbors. Imagine how the discourse would shift, the perceptions we have of one another, if every Palestinian received a vaccine from Israel with a note saying, "I wish you well, Refuah Shleimah."

This article was originally published on NewsWeek