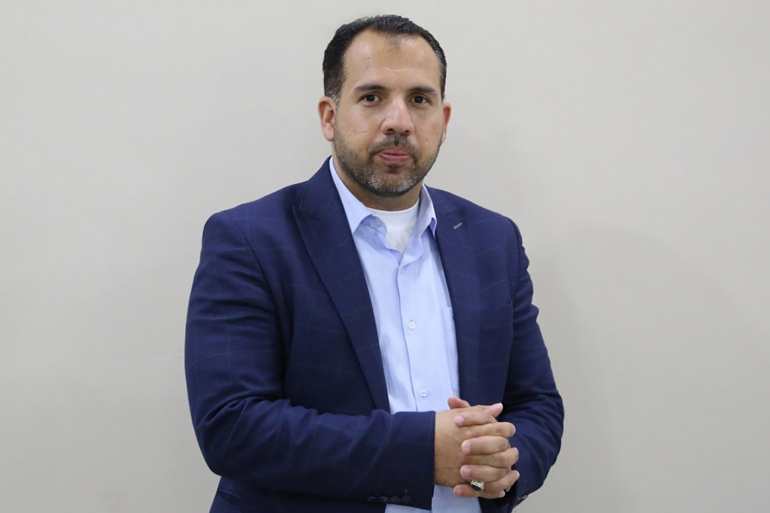 At around 2:30 a.m. on April 21, an Israeli army unit of 12 fully equipped soldiers stormed the house of Al-Rimawi, 40. He was interrogated in his bedroom for a short period after being separated from his wife and children. The unit then took him for further interrogation at the Etzion detention center south of the West Bank.

Alaa’s wife, Maymouna Al-Rimawi, told Euro-Med Monitor that the interrogation lasted for about four days and focused on the nature of his journalistic work. Al-Rimawi is a reporter for the Qatari Al-Jazeera Mubasher TV network and director of Jmedia, a local press agency.

Al-Rimawi has been on  hunger strike since his arrest, a total of nine days, amid fears that his health condition would  deteriorate.

According to his wife, he was able to contact his family just  once since his arrest.

Particularly active in documenting and publishing Israeli violations in the West Bank, Al-Rimawi had been working in a legal manner and in accordance with the necessary licenses required.

Al-Rimawi was transferred to Ofer court on April 25, after a preliminary ruling (not upheld yet) was issued against him for administrative imprisonment of three months without an indictment. The court set the date for upholding the verdict on Thursday, May 6.

Reflecting Israeli disregard for reason, during the court hearing the judge asked Al-Rimawi’s lawyer for evidence of his journalistic activity, despite all his work being published publicly and directly by media outlets.

In turn, Euro-Med Monitor’s Chief Operations Officer, Anas Jerjawi, said: “Alaa Al-Rimawi’s detention is illegal and arbitrary. The Israeli authorities apparently want to retaliate against the journalist for exposing their violations against Palestinians, which has recently escalated in the West Bank”.

“By arresting Al-Rimawi, the Israeli authorities aim to intimidate press workers in the occupied Palestinian territories with military force and dissuade journalists from reporting on these violations against the civilian population,” Jarjawi said.

On Friday, the Israeli authorities arrested journalist Muhammad Ali Ateeq, 27, and writer Mufid Taher Jalghoum, 53, from the city of Jenin in the northern West Bank, after stopping and searching the bus they were traveling on.

The authorities also detained journalist Qutaiba Saleh Qassem while traveling from Bethlehem to Jerusalem on “Checkpoint 300” north of Bethlehem and took him to an unknown destination.

During the recent crackdowns in East Jerusalem, the Israeli forces have injured four journalists in separate incidents.

According to local institutions concerned with the affairs of the Palestinian prisoners in Israeli prisons, Israel has imprisoned around 4,400 Palestinians, including 39 women, 155 children, and 350 administrative detainees held without any charges.

The Israeli authorities use administrative detention to punish Palestinians without a legal basis in periods that can last for ten months without conviction or even an indictment.

Arbitrary and administrative detention is prohibited in the Universal Declaration of Human Rights, which stipulates in Article 9 that “no one shall be subjected to arbitrary arrest, detention or exile”.

In addition,  the International Covenant on Civil and Political Rights in Article 9 prohibits arbitrary arrest or detention of individuals, and states that “No one shall be deprived of his liberty except on such grounds and in accordance with such procedures as are established by law”.

The Israeli authorities must release journalist Alaa Al-Rimawi unconditionally, stop the prosecution and detention of journalists for their legitimate work, and respect the relevant international laws and treaties.

UNESCO should condemn Israel's policy of targeting journalists and make all possible efforts to end the systematic Israeli attacks on journalists in the Palestinian territories, and enhance the safety of journalists fighting for impunity and the crimes committed against them.