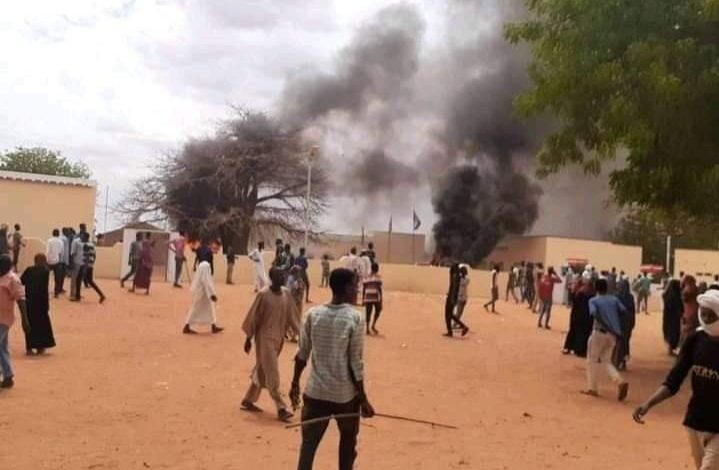 Geneva – An armed force wearing  police uniform opened fire at a peaceful sit-in in the Al-Udayyah neighborhood  in West Kordofan, Sudan Wednesday morning, which killed a woman and injured seven people,  Euro-Mediterranean Human Rights Monitor said in a statement. The state government should ensure that the investigation it opened into the incident is impartial and independent.

Since their sit-in began on December 20, the protesters have been demanding improvements to their living conditions and services.

At 1:30 a.m. yesterday, the Sudanese security forces attempted to dispraise the sit-in. The attempt led to the killing of a woman, injuring and arresting others, and damaging several public properties.

Eyewitnesses told Euro-Med Monitor that a regular force wearing police uniforms attacked a group of protesters while they were in front of the headquarters of the locality presidency. The force used tear gas, light assault rifles (AK47) and other heavy machine guns (DShK). The heavy fire killed Mrs. Howayda Omar Hassan, and wounded seven other people. The force also burned the protesters' tents and arrested several of them.

Ismail Ali (pseudonym), one of the participants in the sit-in, told Euro-Med Monitor: “As a result of the attacks that took place yesterday during the sit-in, we demanded the governor to come [visit the city]. We organized a march and headed towards the locality office. A military force intercepted us and started firing live bullets and tear gas to disperse us, which led to other injuries”.

According to eyewitnesses, the aggressive nature that the security forces used to deal with the protesters only led to more violence. The protesters set fire to the headquarters of the locality and several other government buildings, in addition to burning the house of the executive director of the area and some government vehicles.

For its part, the West Kordofan State Office issued a statement about the events, saying that the state “will open an investigation into these unfortunate events to find out the motives of those behind them, count the casualties, and punish the perpetrators who participated in them”.

Dispersing the sit-in represents a duplicate policy of the Sudanese authorities. The authorities have already carried out several operations like this incident since the ouster of former President Omar Al-Bashir in April 2019; the bloodiest of which was the dispersal of a sit-in at the front of the General Command building in Khartoum in June 2019. At the time, 13 people were killed, and 116 peaceful protesters were wounded.

This excessive use of force would kill any attempt by individuals to exercise their right to peaceful assembly, and heavily indicates Sudan’s systematic policy of targeting peaceful demonstrations, which eradicates  any manifestation of peaceful protests that contravenes with the directions of the government authorities.

The Sudanese transitional authorities are obligated to respect the citizens right to freedom of opinion, expression and peaceful assembly. This is the provisional authorities’ duty, especially since one of the most important goals on which it was founded, is to achieve transitional justice and establish principles of democracy and freedom after decades of dictatorship.

The Sudanese authorities should: