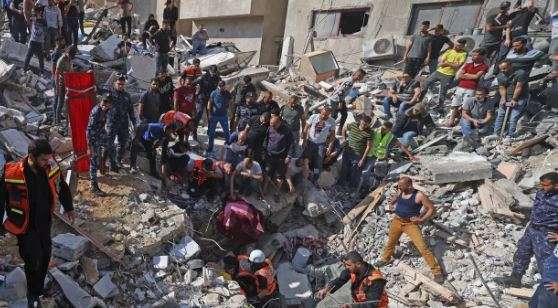 Geneva – The Israeli Army has killed and maimed many Palestinians in the deliberate targeting of unprotected homes with families inside in inhumane military operations, Euro-Mediterranean Human Rights Monitor said.

Since the beginning of the current Israeli bombing blitz, the Israeli forces targeted 27 families: sixteen homes of families were bombed and destroyed with families being inside; two civil gatherings of family members were targeted; a man and his wife were stuck inside their car, and a man and his son were targeted in agricultural land.

So far, the reported incidents have left 78 Palestinians killed, including 30 children and 22 women.

The victims include husbands and wives, mothers and siblings. Three mothers were also reportedly killed along with their three or four children.

The death toll is expected to rise as many victims are still buried under the ruins due to the difficulties faced by the rescue teams.

One of the most horrific crimes was on Sunday, March 16, at 1:00 p.m., when the Israeli warplanes fired about 50 missiles at buildings, residential homes, and roads in the Al-Rimal neighborhood, west of Gaza City. The raids targeted a residential building belonging to Abu Al-Awf family, another for the Al-Kulak family, and the Ministry of Labor headquarters. The missiles killed 42 civilians, including 10 children and 16 women, while 50 others were wounded, including eight children, and 15 women.

The home was completely destroyed without prior notice. Abu Hatab's family was killed including his wife, their four children, his sister, and her three children who fled their home due to the heavy bombing in east Gaza. Another child remains missing, only a five-month-old infant has survived the deadly attack.

According to the Palestinian Ministry of Health, since last Monday, 10 May, 192 people have been killed, including 58 children and 34 women, while 1,235 have been wounded. The number is expected to increase as search and rescue operations continue.

The attack was not an isolated incident but another example of Israeli’s systematic policy that we have witnessed over the past six days.

In 2014, Euro-Med Monitor documented 144 incidents where at least two or more of the same family were killed. The victims' number reached 750 at that time.

The reported attacks are part of hundreds of Israeli air raids that destroyed 719 residential units and partially destroyed at least 4,000 homes and facilities in the 2014 attack.

Israel continues its systematic policy, which targets residential buildings and densely populated neighborhoods. The Israeli government disregards the international humanitarian laws and takes advantage of the international community's failure to hold it accountable for its violations.

Article 25 of the 1899 Hague Regulations provides: “The attack or bombardment of towns, villages, habitations or buildings which are not defended, is prohibited.”

Article 53 of the Fourth Geneva Convention also states that "Any destruction by the Occupying Power of real or personal property belonging individually or collectively to private persons, or to the State, or to other public authorities, or to social or cooperative organizations, is prohibited, except where such destruction is rendered absolutely necessary by military operations."

The international community's silence and the European Union’s negative position towards the ICC's investigation into the war crimes carried out in the occupied territories gave Israel the green light to continue with its escalated violations against Palestinians.

All acting powers should work to end Israeli’s aggressive offensive on the people of Gaza and act immediately to stop the military operations that are claiming more civilian lives every hour.

The ICC should monitor the ongoing Israeli violations in the Gaza Strip, including them in their recent investigations into Israel’s previous violations, and hold Israeli leaders and soldiers accountable.