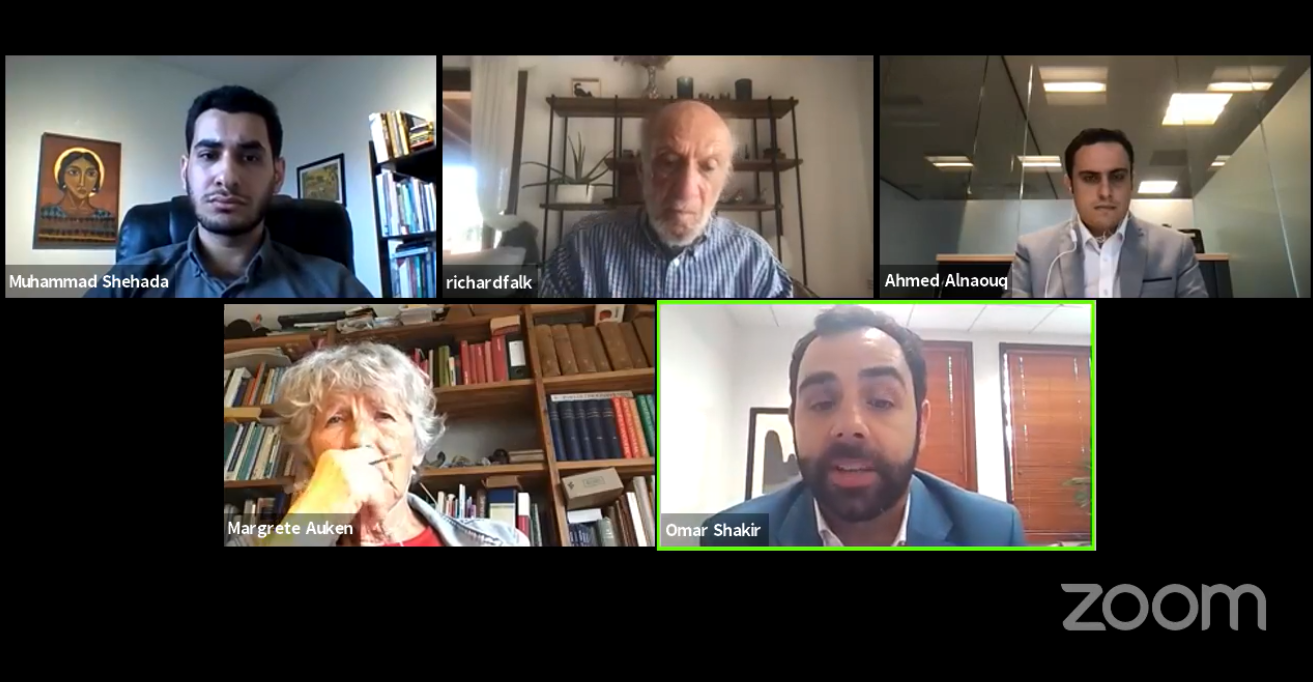 Geneva - A webinar organized by the Euro-Mediterranean Human Rights Monitor on Tuesday discussed Israeli violations in the occupied Palestinian territories, including persecution and the apartheid regime.

A number of panellists participated in the session, including Professor Richard Falk, Chairman of the Euro-Med Council of Trustees and the former UN Special Rapporteur on the situation of human rights in the Palestinian territories, Omar Shakir, Director of Human Rights Watch in Israel and Palestine, Margaret Auken, a member of the European Parliament, and Ahmed Alnaouq, Euro-Med Monitor's Communication and Advocacy Officer. The seminar was moderated by Euro-Med Monitor's Program and Communication Officer, Mohammed Shehadeh.

Omar Shakir, director of the Human Rights Watch office in Israel and Palestine, said that the racist policies pursued by Israel against the Palestinians violate international humanitarian law. He explained that the report prepared by his organization was the result of two years of continuous work. It also relied on monitoring human rights violations in Israel and the Occupied Palestinian territories, analysing Israeli policies for more than three decades relating to the government's treatment of  Palestinians and reviewing documents and letters of Israeli politicians.

Last month, Human Rights Watch issued a detailed report indicating that Israel has committed crimes against humanity, persecution and apartheid against Palestinians in Gaza, the West Bank, Jerusalem and Palestinians inside the Green Line.

Shakir added that the reality is that there is one government represented by the Israeli authorities, which  controls two peoples; one  side enjoys all their rights and privileges, but the other is deprived of those rights.

Shakir added that the Israeli policies  intend to increase the confiscation of Palestinian lands located in the West Bank and their annexation to Israel, depriving Palestinians of them and allocating them to other Israeli Jews. Within the Green Line, the Israeli government is pursuing an approach that aims to Judaize Negev and Galilee, inhabited by most Palestinians, in the so-called 48 areas. Shakir added that the West Bank is also subjected to various forms of violations, including the confiscation of Palestinian lands and restrictions on Palestinians to benefit Israeli Jews.

Shakir concluded his speech with recommendations for the international community to recognize the seriousness of Israeli policies and racist crimes according to international laws and norms and the need to investigate those crimes committed by Israeli leaders in the International Criminal Court and local courts. He added that the countries exporting arms to Israel must stipulate that they stop their crimes against Palestinians before obtaining those weapons, stressing their responsibility to re-evaluate their relationship with Israel and ensure they are not involved in those crimes.

For his part, Richard Falk, Professor of International Law and Chairman of the Board of Trustees of the Euro-Med Monitor, confirmed many reports issued by the United Nations and the Israeli "B'Tselem" organization accusing Israel of practising apartheid against the Palestinians.

Falk added that Israel is deliberately enacting racist laws that guarantee the supremacy of the Jewish population and give them full rights and privileges while denying the Palestinians those rights.

Richard Falk and Virginia Tally had issued a report in 2017 for the ESCWA, in which they concluded that Israel is committing the crimes of apartheid and persecution against the Palestinians.

Margaret Auken, Member of the European Parliament, said that the Israeli embassies in the European Union countries strongly resist any attempts to condemn the Israeli violations under the pretext of anti-Semitism.

"The international reports condemning the Israeli practices remain important to the millions of Palestinians who have suffered persecution and racism for decades," said Ahmed Al-Naouq, a Communications and Advocacy Officer at Euro-Med Monitor.

He added that Israel, despite its condemnation by the United Nations and the Human Rights Council after previous wars on Gaza in which Israel committed war crimes and crimes against humanity, Israeli leaders have not yet been punished or prosecuted.

The seminar concluded with the urgent need for Israel to stop all racist practices and the continuous violations of human rights against  Palestinians and the need to hold Israeli leaders accountable for their crimes.