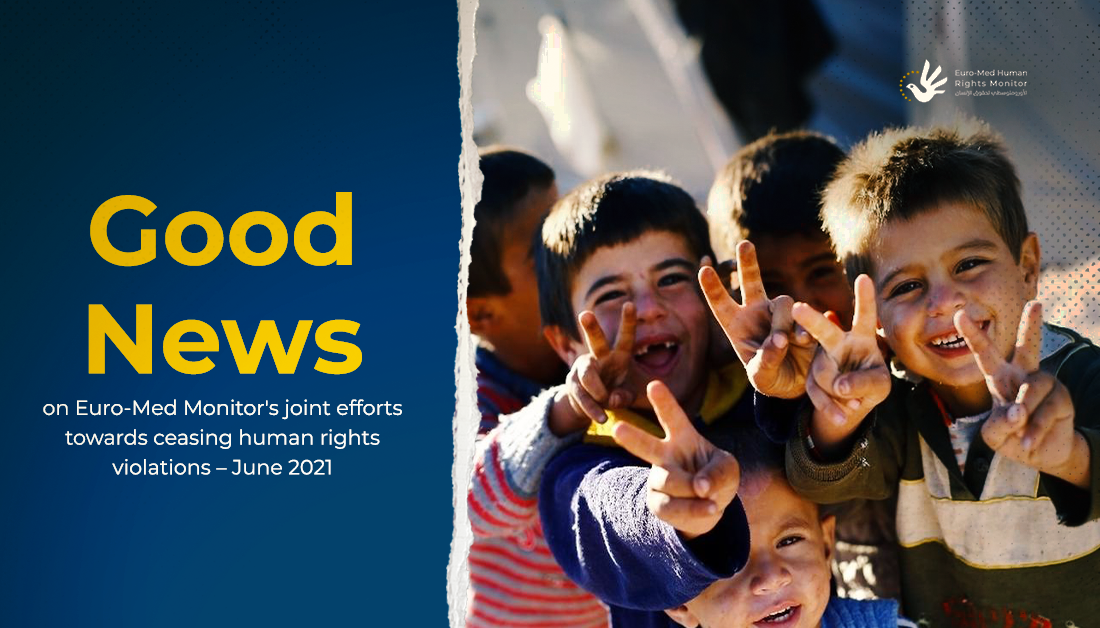 There was hardly any difference in June from the previous months concerning ongoing human rights violations in the Middle East and North Africa region.

Conflict zones in Syria and Yemen have witnessed large-scale violations against civilians. In Yemen, many civilians died during the Houthi group's bombing of residential areas in Marib. The Syrian regime and Russian forces escalated their bombardment of residential neighborhoods south of Idlib. In the Palestinian territories, Israeli demolitions of Palestinian properties have continued in Jerusalem, amid protests against the murder of Palestinian dissident Nizar Banat in Hebron after his arrest by the Palestinian Authority's security services.

Nevertheless, despite the continuous violations, it is crucial to recognize the small steps that – in the long term – will bring considerable improvements towards ending infringements and the redress of victims. In June, our team worked alongside partner organizations to bring real change in ceasing violations and attacks on fundamental freedoms in both the MENA region and Europe. Now, to our delight we can deliver some great news about those achievements.

On June 27, the Saudi authorities released two activists, Samar Badawi and Nassima Al-Sadah, after being arbitrarily detained for three years over their human rights activism.

In April 2020, Euro-Med Monitor also launched a petition signed by members of the European Parliament, calling for an end to violations committed by the Saudi authorities against women in the Kingdom. In partnership with other human rights organizations, Euro-Med Monitor launched several petitions targeting male and female athletes participating in sports events in Saudi Arabia to pressure the authorities to release prisoners of conscience in the Kingdom.

After initially announcing that it will not vaccinate refugees against the Coronavirus, Greek authorities said on June 2 that they would begin implementing a vaccination campaign in refugee camps on the islands of Lesbos, Samos, and Chios.

Euro-Med Monitor wrote to the Greek authorities last March to include asylum seekers within its national plan for vaccination against the Coronavirus and ensure they obtain all their rights.

Euro-Med Monitor addressed the relevant authorities in Germany to immediately end this procedure, enable asylum seekers access to necessary legal mechanisms for their redress and fully abide by national and international law regarding the right to privacy, informational self-determination, confidentiality, and information integrity.

On June 24, France received 43 migrants from Greece, including several minors with their families, as part of the resettlement program to ease the refugee burden on Greece and support the most vulnerable groups of refugees.

Euro-Med Monitor partnered with other human rights organizations and addressed the European Union countries after a horrific fire broke out in the Moria last September to shed light on the difficult conditions in the camps, especially in Greece. Euro-Med Monitor called on the authorities to work on improving the conditions of asylum seekers, especially in overcrowded camps, to accommodate more refugees and lessen their burdens.

On June 28, the Israeli authorities announced that postal traffic to and from the Gaza Strip could resume after its suspension since the military offensive on the Strip in May 2021.

On June 16, Euro-Med Monitor addressed the Universal Postal Union to pressure Israel to urgently resume the movement of mail to and from the Gaza Strip, as it represents a grave violation of citizens’ rights in the Strip and an arbitrary encroachment on their livelihood and family life.

On June 3, Omani authorities released dozens of protesters arrested during demonstrations in the Sohar region at the end of May.

Last month, Euro-Med Monitor urged the Omani authorities to immediately release imprisoned protestors, respect the right of individuals to demonstrate peacefully and not use violent tools to disperse demonstrations.