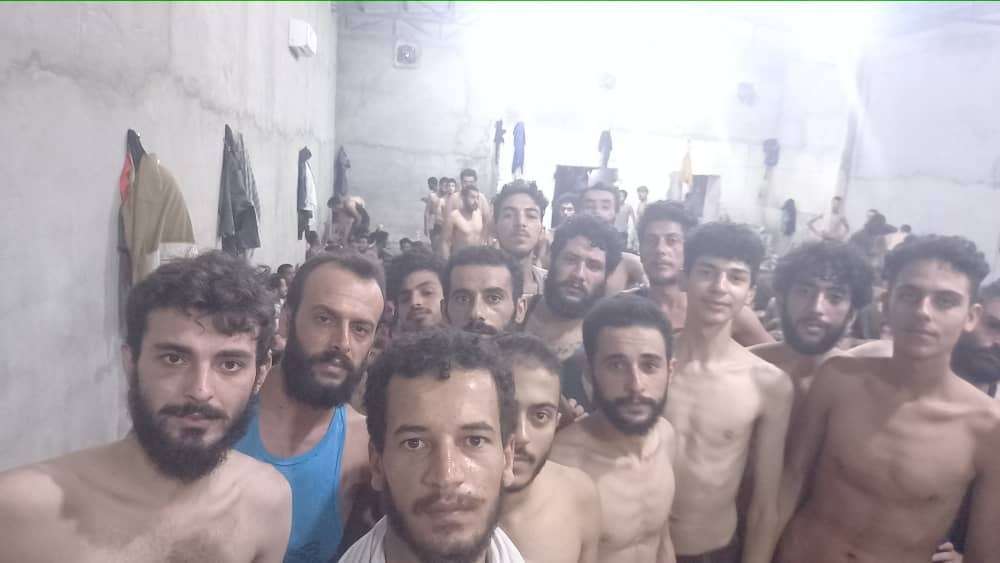 Geneva – The Libyan authorities’ inhumane practices against hundreds of Syrian migrants detained in its prisons are reprehensible, Euro-Mediterranean Human Rights Monitor said today in a statement. An immediate intervention must be made to end these violations that jeopardize human dignity.

During the past four months, the Libyan Coast Guard has arrested about 800 Syrian youth who were trying to migrate to Europe through the Mediterranean from the Libyan shores. The forces took them to four detention centers in the capital, Tripoli, namely Al-Zawiya, Abu Salim, Ain Zara and Ghout Alshaal.

Euro-Med Monitor received testimonies from relatives of Syrian migrants detained in Tripoli. They said that the detainees are living very poor humanitarian conditions and are exposed to complex violations that affect their safety and dignity, being placed in detention centers that lack the minimum humanitarian requirements.

Euro-Med Monitor viewed testimonies and photos published on social media by former detainees. They reported being subjected to humiliating treatment, as they were beaten with plastic pipes and were not provided with proper food or drinkable water.

The detainees are also forced to pay up to $1000 in exchange for their release through "brokers" who receive these sums in agreements concluded between them and the directors of the prisons and detention centers.

Former detainees also said that the administrations of the prisons and detention centers pursue a policy of medical neglect with detainees, especially those with chronic diseases, as they do not provide them with the necessary treatment.

This led to the death of at least one Syrian detainee and the deterioration of the health of many others.

In context, local sources from the Syrian city of Daraa informed Euro-Med Monitor that detainee Azouz Barakat Al-Safadi, 40, from the city of Nawa in the Daraa countryside, died due to health complications in Al-Zawiya prison on August 7. The prison administration neglected his repeated requests for a medical examination at the time as he suffered from a thyroid illness. Libyan authorities have not yet delivered his body to his family or investigated the causes of death.

Most Syrians who arrive in Libya – planning to migrate to Europe – come from the Daraa governorate, southern Syria. These young men try to escape the difficult living conditions in the governorate as a result of the conflict, and the measures imposed by government forces in the areas they control, most notably forced conscription.

Legal researcher at Euro-Med Monitor, Youssef Salem, stressed that “The Libyan government is responsible for all the arbitrary practices that take place inside the prisons and detention centers it runs.”

“The government is also responsible for implementing the relevant local and international rules in dealing with detainees, and abiding by the international conventions it has ratified, including the Convention against Torture and Other Cruel, Inhuman or Degrading Treatment or Punishment,” he added.

The Libyan government should open an urgent investigation into the detention conditions of hundreds of Syrian migrants, put an end to all arbitrary and illegal practices against them, and hold all those involved in these heinous violations accountable.

The United Nations Support Mission in Libya and the Office of the High Commissioner for Human Rights should conduct field visits to prisons and detention centers, where migrants are held, to review the conditions of detention and present comprehensive reports to the relevant United Nations agencies, which should in turn should take all possible measures to limit violations of the rights of migrants and detainees in Libya.