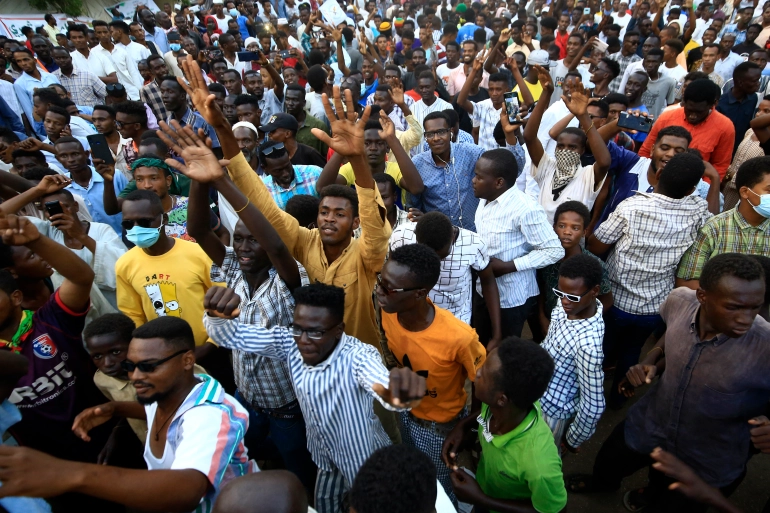 Geneva – The Sudanese army's seizure of power in the country diminishes the hard-won human rights and civil gains achieved after the December 2018 protests, Euro-Mediterranean Human Rights Monitor said today in a statement.

The Sudanese army used excessive force, including live bullets, in suppressing the demonstrations that followed the army's announcement of the seizure of power, especially near the army general command’s headquarters in Khartoum. Seven protesters were killed and about 150 others were wounded, according to medical sources.

Yesterday, Sovereign Council chief General Abdel Fattah al-Burhan, announced the dissolution of the government and the Sovereignty Council, declaring a state of emergency and suspending several articles of the constitutional document signed between the military and civilian leader governing the transitional phase. These measures represent a military coup against all constitutional obligations and civil gains.

In this regard, Chairman of Euro-Med Monitor, Ramy Abdu, said, “The military coup in Sudan shatters Sudanese’s dreams of achieving a just democratic rule. It wastes the sacrifices they made over the past two years to live in a civil state that respects their rights and preserves their dignity.”

“We are particularly concerned about human rights activists and defenders in light of the de facto authorities' failure to respect all their legal obligations. We fear an organized campaign will target them in the coming days.”

The army's announcement of the seizure of power was preceded by a campaign of arrests against senior civilian officials in the state, including Prime Minister Abdullah Hamdok, a large number of ministers, media professionals, and civilian members of the Sovereignty Council.

The Sudanese army's audacity to infringe on the will of the Sudanese in this way proves its disbelief in the democratic path. The military leadership’s actions expose its fake behavior during the transitional period, during which it pretended to accept partnership, share power, and hand the rule to an elected civilian authority.

Euro-Med Monitor viewed dozens of videos published by Sudanese activists showing multiple violations committed by the security and army forces against the demonstrators. They used live bullets and tear gas and beat protesters, including the women.

The military coup has a catastrophic impact on freedoms and pluralism in the country. The security forces began a campaign of arrests against leaders of the Forces of Freedom and Change, the Arab Socialist Baath Party, the Unionists Association, and the Sudanese Congress Party. These abuses indicate an actual plan to disturb the work of parties and civilian bodies to facilitate the return of the authoritarian rule that the Sudanese suffered for decades.

Despite escalating calls for widespread demonstrations and comprehensive civil disobedience, the protests should remain peaceful. At the same time, the de-facto authorities should respect the rights of individuals to freedom of opinion, expression, and peaceful assembly and refrain from all violent and illegal practices against the protesters.

The Sudanese army’s leadership should immediately reverse all the measures it took on October 25, release all detainees – especially civilian leaders – and adhere to the democratic process and constitutional methods for the transfer of power. And they should identify and hold accountable all those involved in the killing and suppression of demonstrators.

The United Nations and the African Union should not recognize the military coup in Sudan or its results, take all possible measures to restore the democratic path, prevent the return of the authoritarian rule, and protect the rights and freedoms of individuals and civil entities in Sudan.