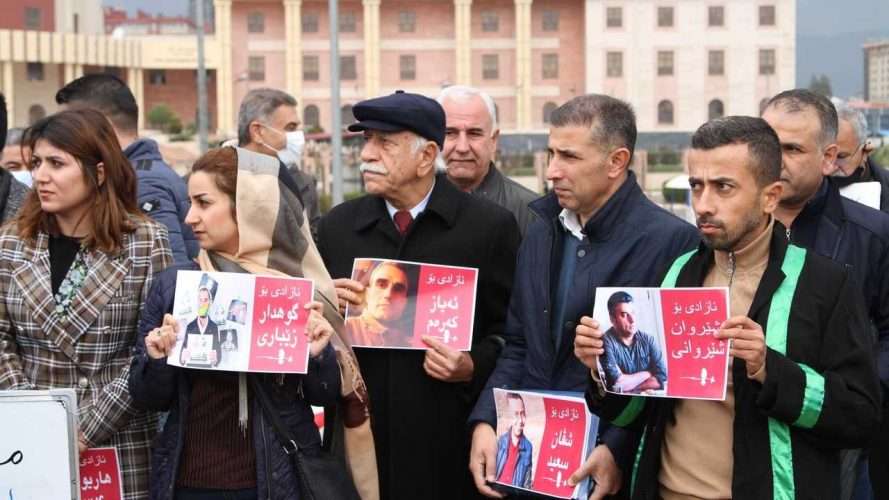 Geneva - The Iraqi Kurdistan authorities should immediately release Badinan detainees who are being held in inhumane and illegal conditions, and are facing seemingly malicious charges for exercising their right to expression, Euro-Mediterranean Human Rights Monitor said today in a statement.

The authorities are still detaining 55 people out of 81 they arrested between August of last year and the end of last October, for being active in issues related to freedom of opinion and expression, and demanding basic rights. Only five were brought to trial.

Most activists were arrested under vague charges, most prominently undermining the security and stability of the region, which is punishable by life imprisonment under Article 1 of Law No. 21 of 2003, which states that “whoever deliberately commits an act intended to infringe on the security, stability, and sovereignty of government institutions […] shall be punished with life or temporary imprisonment.”

Euro-Med Monitor received information confirming that the authorities force the detainees to sign pledges not to disclose their detention conditions and the violations they were subjected before releasing them.

H.B. (preferred to remain unnamed), who is a member of the detainees' legal defense team, told Euro-Med Monitor that the detention conditions are harsh as the detainees are subjected to various types of violations, including physical and psychological torture, in the absence of official oversight of places of detention.

“A number of Badinan are held with other prisoners in a room of 12 x 6 square meters, in which about 140 detainees are accumulated, and the number in some cases reaches 157,” he said. “This prevents them from sitting normally and forcing them to take turns when going to sleep, as they cannot go to sleep at the same time.”

The detainees carried out a hunger strike more than once, demanding better conditions, but the prison administration forced them to end the strike without improving their conditions, he said.

He added that the detainees also suffer medical neglect, and are subjected to various types of torture, whether physically or psychologically, including solitary containment.

In most cases of arrest, the authorities rely on the “secret  informant” method, in which they illegally provide apparently malicious statements without evidence. In some cases the secret informant's statement was the only basis for the arrest of a detained activist.

In some cases, there were clear flaws in the legal procedures, as authorities decided the arrest based on a subsequent statement from the secret informant. This includes the decision to arrest a number of detainees on September 9, 2020, based on a secret informant’s statement documented on September 12 September 2020, that is, three days after the date of arrest. This was repeated with several detainees, including Masoud Shangali, Karkar Abbas, Bandwar Ayoub and Shirwan Taha.

Omar Al-Ajlouni, a legal researcher at the Euro-Med Monitor, said: “The Kurdistani  authorities’ practices against civilian activists are marred by serious legal flaws, most notably the vaguely worded  accusations, the use of the secret informant method, which opens the doors for fabricating charges, in addition to the continued detention of most of them for many months without bringing them to court."

Al-Ajlouni added that "the authorities did not only arrest activists for exercising their legitimate right of expressing their opinion, but intended to maximize the price of exercising freedoms in the country by putting detainees in poor conditions to send intimidating messages that a high cost awaits anyone who thinks of opposing the authorities or protesting the current conditions.”

The Kurdistani authorities should immediately release all prisoners of conscience, provide all guarantees of a fair trial for all other detainees without delay, and abolish all illegal methods used to fabricate charges against activists and opponents.

They should respect the right to freedom of opinion, expression and publication; the right to peaceful assembly; activate oversight over prisons and detention centers; and ensure that detention conditions are in line with the standard rules for the treatment of prisoners.