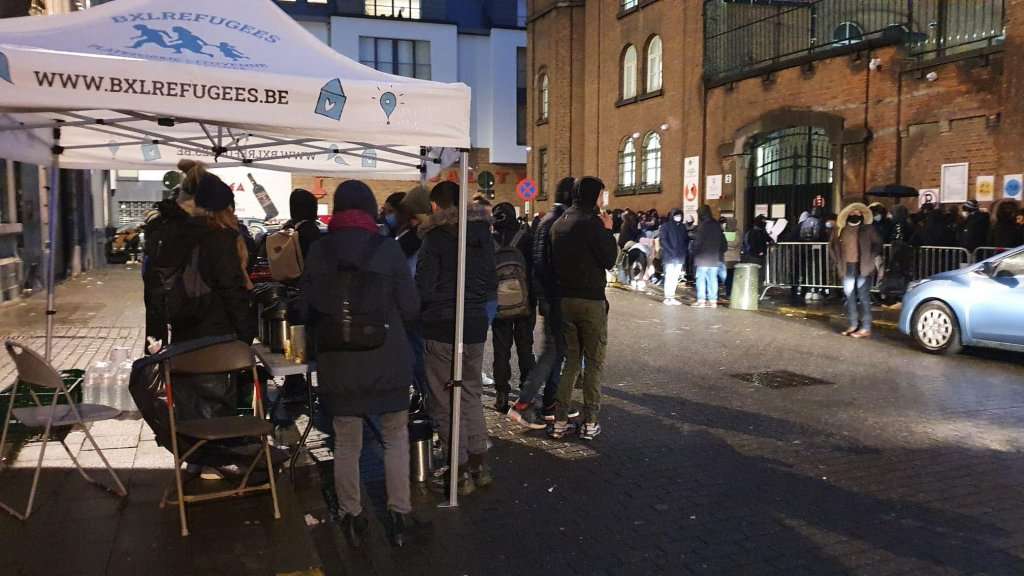 Hundreds of asylum seekers are sleeping in front of the only registration centre in Brussels in order to submit their asylum requests and find a shelter, but the Belgian accommodation system once again seems overwhelmed and incapable of upholding their right of reception and protection.

For almost a month now, every morning, between 150 and 200 people queue up in front of the Fedasil agency, the federal agency for the reception of asylum seekers, in downtown Brussels to lodge their asylum applications and find a place to stay for the night. Many have started to remain there overnight and sleep on the sidewalk to hold their spot in the queue, in the cold, in the midst of rats and garbage.

Belgium has over 28,000 reception places in total, in 79 collective centres and individual housing, but the network seems entirely saturated.

According to Fedasil, this is particularly due to the increase of asylum applications, the resettlement of Syrian refugees, the extension of the length of stay in the reception centres, and the repatriation mission from Afghanistan, as well as the summer floods and the reservation of some places as isolation sites for possible COVID-19 infections.

Yet all the contributing factors were predictable and treatable, with the most recent ones still occurring several months ago, highlighting a system incapable of flexibility, anticipation, and eventually credibility.

Fedasil’s personnel stopped working in October for a number of days to protest against “the lack of action by our political authorities” and the recurring cuts to the services when the arrivals decrease.

This whole situation is cyclical, structural, and foreseeable.

The lack of reception capacity is a recurring concern in Belgium. The same arrival centre faced significant difficulties in 2018 and 2019, when the government set a limited amount of asylum applications per day. Then the Council of State ruled it to be in contradiction with national and international law. After this judgement, all asylum seekers were accommodated on the very day they made their asylum applications. However, in January 2020, the government decided to limit the right to reception once again.

“It’s not a matter of resources, but of priorities. There are neither unpredictable emergencies nor mass arrivals now, it’s clear that the problem is structural” said Michela Pugliese, Migration and Asylum Researcher at the Euro-Med Monitor, “All over Europe, states avoid looking at the bigger picture, all are linked by negligence and lack of a long-term vision, especially with regard to asylum seekers and homeless people. When you manage a systematic issue with emergency solutions and time-based concessions, rather than an unlimited and steady provision of rights, this is bound to happen.”

The consequences of poor management and lack of planning are disastrous for the physical and psychological wellbeing of people that states should protect, but also for the credibility of the Belgian authorities and of the European Union as well. Indeed, the housing situation goes beyond Belgium, with many European countries reporting similar problems, like France and the Netherlands.

Euro-Med Monitor calls on Belgium to guarantee to all applicants of international protection health care and a dignified standard of living at all times; to ensure their right to material reception conditions from the moment they lodge their asylum application, as according to Art. 20(6) of the Reception Conditions Directive; and to fulfil their right to apply for international protection as soon as possible, in compliance with Art.6 of the recast Asylum Procedures Directive.

Euro-Med Monitor calls on the European Commission to ensure compliance with European asylum law, and in particular the Reception Conditions Directive, and to take appropriate enforcement measures when systematic concerns and violations are identified.