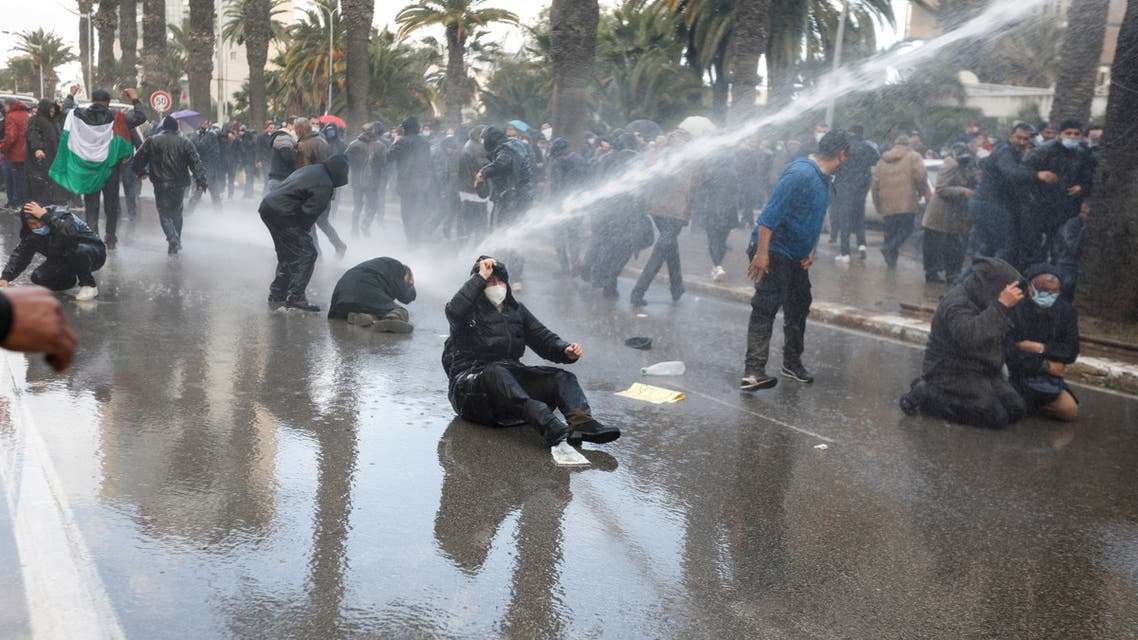 Geneva – The Tunisian security forces’ use of excessive force against protesters and opponents and assaulting journalists during the crackdown of Friday’s peaceful demonstrations warns of turning the country into a police state again, Euro-Mediterranean Human Rights Monitor said Saturday in a statement.

Shortly after demonstrations were called to celebrate the 11th anniversary of the overthrow of late President Zine El Abidine Ben Ali, the Tunisian government announced a night curfew and a ban on all gatherings for two weeks, starting from Thursday, under the pretext of fighting the Coronavirus. This raised suspicions that the decision might have come to pre-empt the demonstrations—which were called for by opponents of the exceptional measures announced by Tunisian President Kais Saied last 25 July, by which he seized all powers and suspended the Parliament.

Despite the ban, thousands took the streets, as the opposition considered that it was engineered specifically to pre-empt the demonstrations. The protesters flocked to Avenue Mohammed V in the capital and raised slogans calling for the overthrow of what they described as a coup and an end to the President’s exceptional measures before the security forces intervened to disperse the demonstrators using water cannons and tear gas.

The security forces arrested a number of demonstrators, including lawyers and prominent figures, after beating them and transporting them in military vehicles to unknown destinations. Some of them were released later. The security forces also attacked journalists to prevent the documentation of the violent scenes.

The correspondent of the French newspaper, Libération, in Tunisia, Mathieu Galtier, was brutally attacked when he was filming a violent attack on a protester. A group of security forces severely beat him despite introducing himself in Arabic and French.

The security forces also took his mobile phone, seized the memory card containing the photos and video clips he had taken, and took him to a police station.

The attack left him with a 10-centimeter wound on the forehead and blue bruises on his right hand. “They started hitting me; I was on the ground, curled up in a fetal position. I was screaming that I was a journalist. One of them doused me with gas...They kicked me, and they took my phone, my press card,” the newspaper quoted its reporter.

The security forces also arrested several other journalists, confiscated the video materials they had taken, and arrested some of them. Hakaekonline, a local news website, also said that the police seized the phone of its correspondent and viewed her private messages and photos while she was filming during the protest. The security personnel also arrested a Business News newspaper videographer before releasing him.

All those arrested in connection with the peaceful protest should be released, and an investigation should be opened into the incidents of assault and repression against demonstrators and journalists.

What happened is a violation of the right to peaceful assembly guaranteed by Tunisian laws and relevant human rights charters. Banning assembly under the pretext of fighting COVID-19 does not justify crackdowns—especially in light of suspicions that the ban was imposed specifically to prevent opposition demonstrations, as the authorities had allowed demonstrations hailing the presidents’ measures during the peak of the spread of the virus.

The continued deterioration in the human rights situation in Tunisia since 25 July, including arbitrary arrests, restrictions on public and journalistic freedoms, trials of civilians before military courts, and trials of people against the background of freedom of opinion and expression turn the country into a totalitarian police state.