Write down, I am an Arab: Even the simple right of issuing Palestinian ID cards, Israel controls 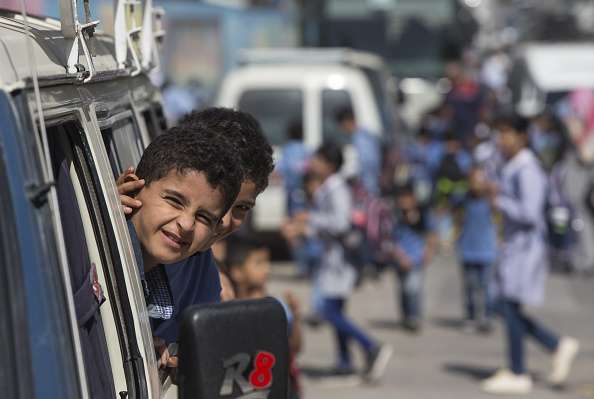 Palestinian students are seen after their school day at a UNRWA ( United Nations Relief and Works Agency for Palestine) school in Gaza City on 12 October 2016. [Getty]
30 Jan 2022 Israel-Palestinian Territory
Share On Copied
AR

On January 12, the Palestinian Authority's Minister of Civil Affairs, Hussain Al-Shaikh, jubilantly announced a "victory" of Palestinian diplomacy and the key fruit of the PA president's controversial meeting last month with Israel's Defense Minister, Benny Gantz. The news concerned a new batch of 1,000 Palestinian national IDs that was granted by Israel, mostly to people who have lived in Gaza for years without official papers, because Israel had refused to add them to the population registry.

This follows an earlier announcement by Mr Al-Shaikh from late December, where he indicated that based on family reunification, Israel will gradually grant 10,000 Palestinians the right to legally reside in designated parts of the occupied territories where they had already been living for years.

The most significant inference of these announcements is not that a belligerent occupier is bestowing occasional crumbs of mercy on the occupied population. It is rather the egregious revelation of how deep Israel's occupation penetrates every aspect of Palestinian lives, even in Gaza where Israel purports it had withdrawn in 2006.

The most pressing question raising itself here is: how come Israel gets to decide which Palestinians are included or excluded from the PA's own population registry of Gaza and the West Bank?

For a Palestinian passport, ID or birth certificate to be recognized internationally and by Israel, their holder must be registered in both the PA's Ministry of Interior and COGAT's Population Registry Office. The latter holds the ultimate authority to reject or nullify the entry of any name in the registry or edit its associated details.

Each Palestinian ID states whether its holder belongs to Gaza or the West Bank. The PA cannot change the canton Israel designated for a Palestinian, and it cannot add any of nearly six million Palestinian refugees in the diaspora to its population registry if they attempt to return to the territories under its nominal control. Only Israel exclusively retains these powers.

Thousands of diaspora Palestinians who returned to Gaza to be reunited with their families and some hundreds of Gazan ID holders who relocated to the West Bank are in the eyes of Israel "illegal aliens".

Palestinians without a national ID approved by Israel cannot travel, open bank accounts, seek medical treatment in the West Bank, register for insurance, etc., because Israel does not recognize their mere existence.

Muthna Al-Najjar, a Gaza-based well-known journalist was one of 3200 Palestinian who was finally given an ID by Israel last December. He had been stuck in this limbo for nearly 26 years since his family returned to Gaza in 1995. He has not been able to travel out of Gaza a single time during his agonizing waiting for his most minimum right to belong to the place where he lives. Overwhelmed with joy, Muthana held an open party in the street to celebrate losing one of many shackles of oppression around his neck.

Palestinian ID holders are classed in three categories and afforded or denied rights accordingly. Jerusalemites are given blue IDs that allow them to access Israel. Palestinians in the West Bank and Gaza, however, are given green IDs that state their holder's religion and set canton.

A Gazan ID holder can not move to, or work in, the West Bank or Jerusalem, and would need an Israeli security permit to be allowed to visit either territory strictly for humanitarian reasons (e.g., receiving medical treatment).

Israel's Military Order No. 1650 on the Prevention of Infiltration authorizes the arrest, deportation or imprisonment for 7 years of any person present in the West Bank without the appropriate permit even if born in the West Bank or moved lawfully in from Gaza.

Israel's government is conveniently way more lenient with the permanent relocation of Palestinians downwards, to the Gaza Ghetto, than upwards to the West Bank or Jerusalem.

Israel has even punished Palestinians on multiple occasions by lowering their status to Gazans and banishing them to the beleaguered enclave. During the second intifada, Israel permanently banished 26 Palestinian militants from Bethlehem to Gaza known as the "Exiles of the Church of the Nativity." Similarly, in the 2011 prisoner swap with Hamas, Israel punitively banished 131 Palestinian prisoners from the West Bank and Jerusalem to Gaza.

What is even more disturbing is that a Palestinian can never be free of Israel's inhumane categorisations. If, for example, a Gazan emigrates, obtains new citizenship (e.g. German), renounces the Palestinian one and tries to visit the West Bank or Jerusalem using a German passport, Israel would not allow them. They would still be treated by Israel as Gazans subject to the same restrictions.

If a British or US citizen with a Gazan parent tries to enter the West Bank or Jerusalem using a British or US passport, Israel could deny them entry and subject them to the same restrictions as Gazans because "persons believed to have a claim to a PA ID by virtue of ancestry will be treated for immigration purposes as residents of the West Bank and Gaza," as the US country report states.

This cruel system of discrimination and tyrannical control is merely one of many layers of oppression that makes Palestinian lives impossible. For it persists as long as the occupation lives, no matter how many crumbs of mercy Israel's government occasionally throws at the Palestinians to sell an image of a benevolent or generous ruler.

Only one way can set Palestinians free of this besiegement: full rights and citizenship either in one or two states.

This article was originally published on The New Arab