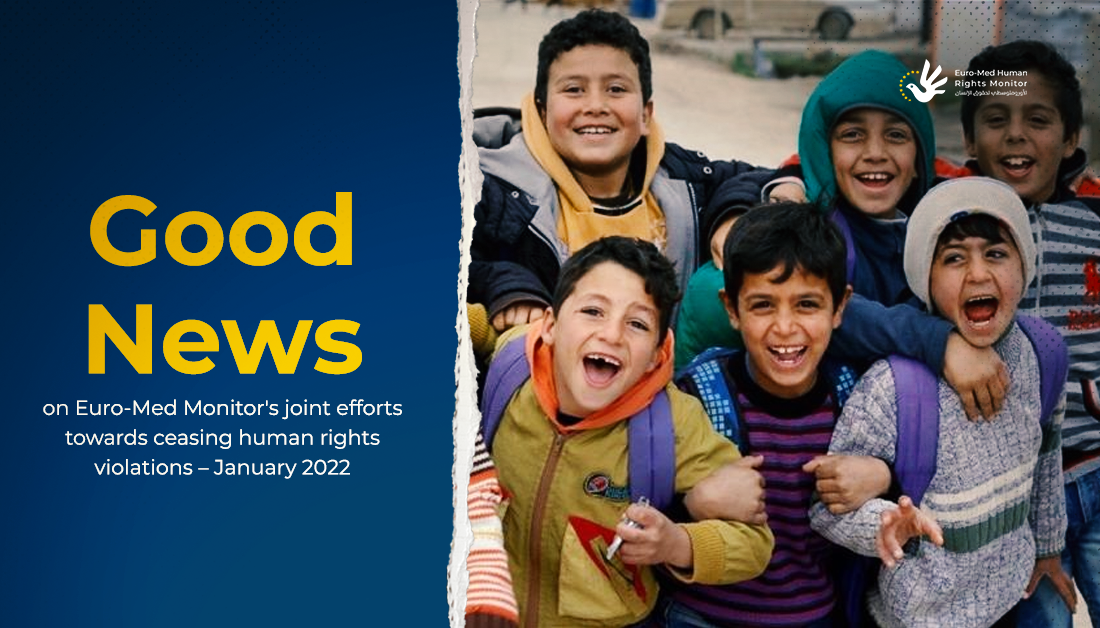 Over the decades, violations have continued to plague the Middle East and North Africa, especially with the expansion of armed conflicts and the constant repression of the voices of activists, politicians, journalists, and others. However, despite the bleak human rights reality in the region, it is crucial to recognize the small steps that, in the long term, will bring considerable improvements towards ending infringements and the redress of victims.

In January, our team worked alongside partner organizations and dozens of regional and international organizations to bring real change in this regard by speaking to decision-makers about practices and methodologies that should be addressed, reformed, or completely stopped. We also harnessed the power of social media to virtually engage the public in issues that affect their rights and human dignity.

On 13 January, the German judiciary issued a life sentence against former Syrian intelligence officer Anwar Raslan for crimes against humanity, including the murder and torture of Syrian detainees in a secret prison in Damascus between 2011 and 2012.

Since the beginning of the conflict in Syria, Euro-Med Monitor has implemented dozens of pressure and advocacy campaigns urging the concerned parties to intervene effectively to end these violations and hold those responsible to account.

In January, the Bahraini authorities released more than 40 prisoners of conscience before the end of their sentences under the Alternative Penal Code.

Since the beginning of the popular protests in Bahrain, Euro-Med Monitor has issued several reports documenting the authorities’ arbitrary policies against dissidents, including illegal detention, unfair trials, and death sentences. Through official correspondence addressed to decision-makers, Euro-Med Monitor called for exerting pressure on the Bahraini authorities to put an end to their human rights violations and release all prisoners of conscience.

On 13 January, European MPs criticized the Danish authorities' refusal of Syrians' asylum applications and attempts to refer them to external processing centers as part of Denmark’s stated goal of reaching "zero asylum seekers." The MPs said this policy contradicts the Dublin Convention on the examination of asylum applications.

Euro-Med Monitor had warned of the Danish government's intentions to tighten its immigration policies by reducing health care benefits for asylum seekers and forcing them to work in exchange for it. Euro-Med Monitor called on the Danish government in official correspondence to review its restrictions on asylum seekers and work to integrate them into society within the European Union Action Plan on Integration and Inclusion (2021-2027).

Jordan issued 62,000 work permits for Syrian refugees, the highest annually since the start of the Syrian refugee crisis. This way, Syrian refugees will have an active role in reviving the kingdom's economy and reducing dependence on external support.

Over the past years, Euro-Med Monitor reports and statements documented the violations against Syrian refugees and the deterioration of their living, economic, and humanitarian conditions in Jordan as a result of the scarcity of opportunities they receive in exchange for Jordanian citizens.

On 19 January, the European Union approved a regulation establishing and giving full capacity to a new European asylum agency to improve the EU asylum policy by providing operational assistance and enhanced technologies to member states. This agency would work to ensure the protection of the rights of asylum seekers, provide complaints mechanisms and improve reception mechanisms for asylum seekers in the European Union.