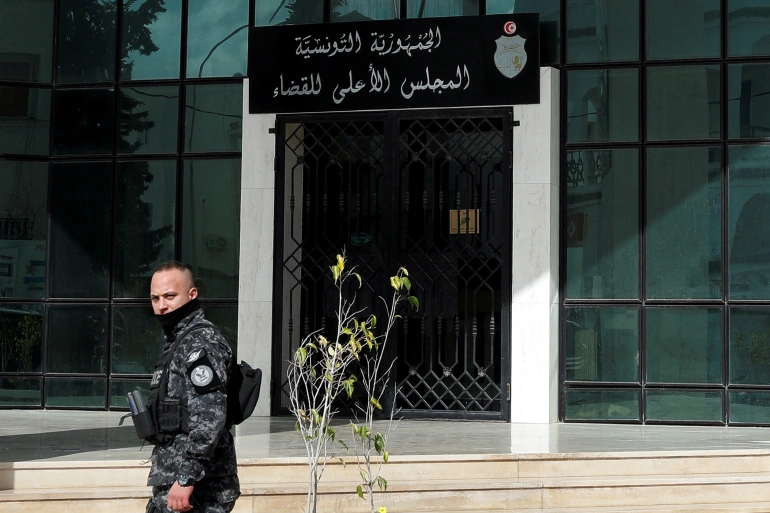 Geneva – Tunisian President Kais Saied’s decree dissolving the High Judicial Council (HJC) and replacing it with a temporary judicial authority violates the constitution, undermines the independence of the judiciary, and abolishes the principle of separation of powers, Euro-Mediterranean Human Rights Monitor said Saturday in a statement.

There is no constitutional justification for the president to interfere in the judicial authority in this way. The presidential decree could have dire repercussions on the composition and stability of the judicial system in the country.

On Saturday, Saied issued decree No. 11/2022, dissolving the HJC and replacing it with a temporary judicial authority under corruption-suspension claims one month after another decree eliminating HJC members’ grants and privileges.

The new decree fuels fears that the president is attempting to seize all state powers for himself, as its various provisions place him as a primary reference in the HJC’s decision-making, including appointment and dismissal of judges.

The decree also illegally revokes some of the judges’ constitutional and union rights. Chapter 9 of part one of the decree bans judges from engaging in any kind of strikes or collective opposition actions that would disrupt the work of judicial bodies.

Legal researcher at Euro-Med Monitor Youssef Salem said: “The Tunisian President Kais Saied’s decision to dissolve the HJC and create a temporary judicial authority with partial powers is nothing but a result of the executive authority’s overpowering the rest of the powers, which the president established in Decree No. 117/2021 last September. This paved the way for legitimizing the disruption of state institutions and the imposition of presidential guardianship over them.”

“Although the exceptional measures are temporary and intended to ward off imminent dangers, the President has been seeking to exploit these months-long measures to concentrate power in his hands; to exclude political opponents; to disrupt the provisions of the constitution, replace them with exceptional presidential procedures, and upgrade them to the same power.”

The Tunisian President should abolish decree No. 11/2022, respect the independence of the judiciary, and abide by the provisions of the 2014 Tunisian Constitution and the principle of separation of powers.

The international community should condemn these illegal measures that President Saied is trying to use to seize all powers and control state institutions.

The international community should pressure him to stop his serious constitutional abuses that would waste democratic gains and restrict and abolish the constitutional rights of individuals, parties, and unions in Tunisia.