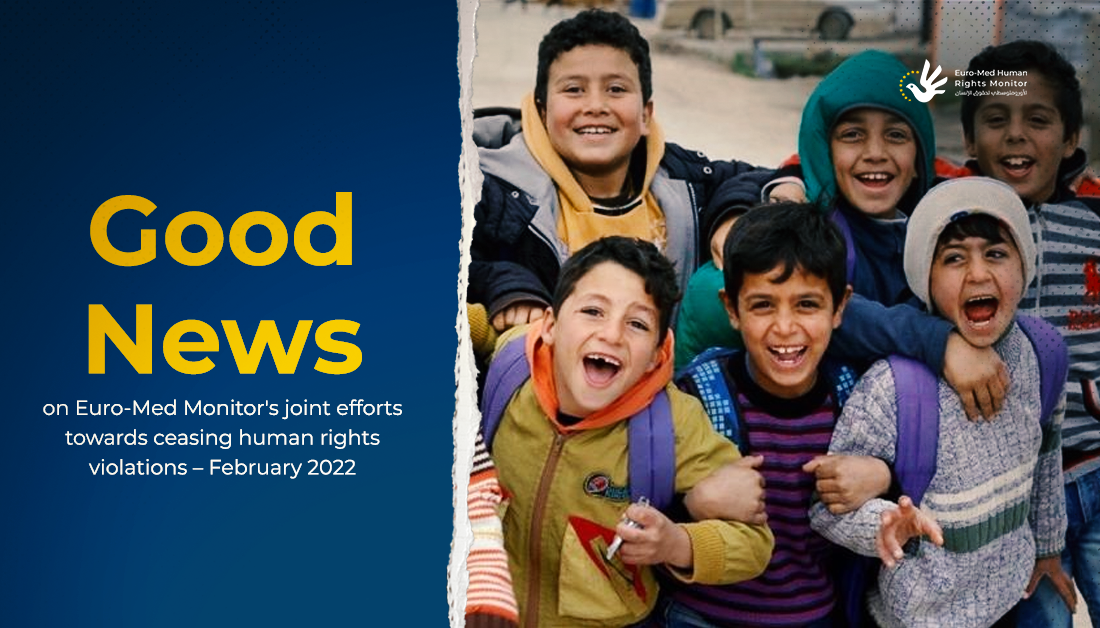 For decades, human rights violations have plagued the Middle East and North Africa, especially with the proliferation of armed conflicts and constant attempts at suppressing the voices of activists, politicians, journalists, and others. In February 2022, the cycle expanded to include Europe for the first time in decades when Russian forces launched a large-scale attack on Ukraine. This attack has already claimed the lives of scores of civilians and caused great damage to civilian facilities. However, despite the region’s bleak human rights record, it is crucial to continue recognizing the small steps that—in the long term—will bring about considerable improvements in eradicating infringements and in the redress of victims.

In February, our team worked alongside partner organizations and dozens of regional and international organizations to generate real change by speaking to decision-makers about practices and methodologies that should be addressed, reformed, or abolished. We also harnessed the power of social media to virtually engage the public regarding issues that affect their individual rights and also human dignity as a whole.

On February 3, the Court of First Instance in the Italian city of Palermo sentenced two people to 20 years in prison for torturing migrants held in Libya’s Zuwara prison.

For years, the Euro-Med Monitor has been documenting illegal practices against migrants and asylum seekers in Libyan detention centers, including torture, extortion, and persecution. We met with several Libyan decision-makers and European representatives to urge them to take concrete steps to identify the perpetrators and hold them accountable.

[Report: Complex persecution: Complemented system of oppression and exploitation of migrants and asylum seekers in Libya]

On February 15, Italy's Supreme Court of Cassation upheld the right of the heath of asylum seekers living in emergency reception centers. It called the Italian government to take measures to protect asylum seekers from the coronavirus pandemic without any discrimination.

Over the past years, Euro-Med Monitor had addressed Italy and other countries, urging them to ensure that migrants and asylum seekers receive full health care, especially during the pandemic, and end all discriminatory practices against them, especially in terms of observing preventive measures and distributing vaccines.

In February, Saudi authorities released a group of prisoners of conscience following years of detention.

In cooperation with its partners, Euro-Med Monitor has launched a years-long pressure and advocacy campaign including presentations to the European Parliament and meetings with officials and other decision-makers. Our goal is to pressure the Saudi government to end its policy of arbitrary detention, ensure the release of remaining prisoners of conscience, and secure basic freedoms in the country.

On February 28, the Security Council adopted a resolution describing the Houthi group as a “terrorist group,” banning all countries from selling arms to the Houthis.

Throughout years of armed conflict in Yemen, Euro-Med Monitor has called on United Nations institutions to stop arming the parties involved in the conflict, and to refrain from selling any new weapons that would prolong the conflict there.

On February 15, the Council of Europe Commissioner for Human Rights, Dunja Mijatović, published a report on asylum seekers. She called on Malta to suspend its cooperation with Libya concerning the issue of migration until it is committed to ensuring that migrants and asylum seekers are treated in a manner that respects their rights. Mijatović also urged Malta to enact measures to prohibit the violation of migrants’ and asylum seekers’ rights within its territory, which would include improving reception conditions, ensuring independent oversight of detention centers, and permanently ending the detention of children.

[Report: Complex persecution: Complemented system of oppression and exploitation of migrants and asylum seekers in Libya]

On February 12, the Iraqi authorities announced the arrest of a person "responsible for carrying out many assassinations" in the southern province of Maysan.

Since the escalation of assassinations in Iraq, which coincided with widespread, popular protests calling for reform, Euro-Med Monitor has urged Iraqi authorities to make every possible effort to protect activists and opinion-holders, and to prosecute all those involved in the numerous assassinations of civilian activists in Iraq.