Ukraine crisis shows that Europe cares deeply for refugees, when it wants to 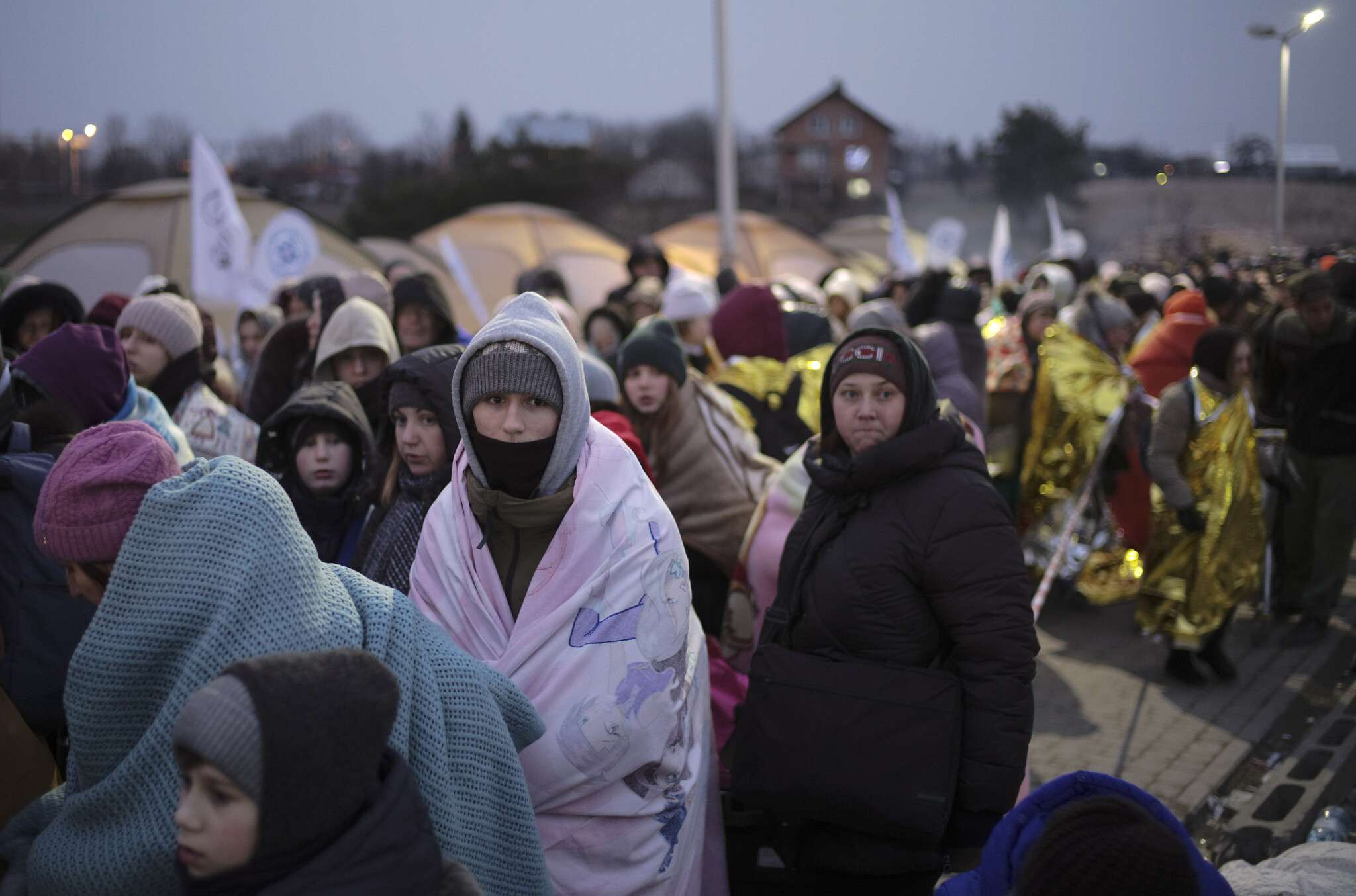 Refugees wait in a crowd for transportation after fleeing from Ukraine and arriving at the border crossing in Medyka, Poland, March 7, 2022. (AP Photo/Markus Schreiber)
08 Mar 2022 Europe
Share On Copied
AR

At five in the morning on February 24, residents of Ukraine’s capital city of Kyiv were awakened by the haunting sound of air raid sirens, echoing the darkest times of the 20th century for Europe. The first target of the Russian bombing attack on Ukraine was the main international airport. When a crisis occurs, mobility is always the first casualty. There is an initial dramatic spike in movement—crowds assemble at bus stations, a seemingly infinite number of cars queue in the streets, and panic convinces people to send their children and other vulnerable loved ones away as soon as possible. Consequently, movement is severely restricted due to a lack of critical infrastructure, unclear information, the establishment of curfews, and security concerns leading to paralyzing fear and forcing people to hide out in shelters, bunkers and metro stations.

It has been more than a week now since Russia launched a “full-scale invasion” of Ukraine, targeting several cities and villages across the country with air raids and missile strikes. While the National University of Kyiv-Mohyla Academy has suspended all lectures as Ukrainian college students practice using guns and making Molotov cocktails, police in Russia have arrested more than 2,000 courageous citizens protesting in the streets against the war. The human cost of violence is becoming more evident with each passing day. Between February 24th and 28th, the Office of the United Nations High Commissioner for Human Rights (OHCHR) recorded 142 civilians killed in Ukraine, including 13 children, and 408 civilians injured, 26 of whom are minors.

As the number of people in need of humanitarian aid increases by the hour, mobility remains one of the main instruments of self-defence. The first and clearest consequence of the Russian attack and occupation is the stream of displaced people who have fled their homes and are seeking protection in western Ukraine or elsewhere in Europe. They are mainly women and children, as it is currently forbidden for Ukrainian men between the ages of 18 and 60 to leave the country. The latest estimates report that, since the Russian military invasion began, more than 100,000 people have been displaced within Ukraine, while around 660,000—more than half a million people—have already fled to nearby countries.

Despite such unpredictable and high rates of mobility, all the neighbouring countries have opened their borders: Poland, Hungary, Moldova, Romania, Slovakia. National authorities are assuming responsibility for the reception, accommodation, and protection of people fleeing Ukraine. Local communities are providing financial and material support, from food and hygiene items to transport and temporary shelters, plus interpretation services, legal advice, and psychological support.

For the first time, Europe is welcoming asylum seekers without hesitation, without fear, and without national disputes.

Suddenly everyone, from citizens to governments, realizes that peoples are interconnected and interdependent and that it is beneficial for all to keep borders open and allow people in. Yet the legitimate rush to help Ukraine civilians highlights the blatant disregard for all other human tragedies. For less Western, less white sufferers, there is no space in accommodation centers, no time for a real vulnerability assessment, no money for proper assistance, no credibility of asylum claims. Europe has never shown this much care and respect for the people of Yemen, who face what is defined by the UN as the “largest humanitarian crisis in the world”, nor for those in Palestine—under military occupation since 1967—or in Afghanistan, Syria, Libya, Iraq, or Myanmar.

A different ethical and political compass has taken shape and is being used in the cases of thousands of Ukrainians on track to being welcomed into states led by nationalist governments that have historically been reluctant to welcome refugees. The Italian right-wing and anti-immigrant politician, Matteo Salvini, has invited the government to welcome the Ukraine citizens fleeing the conflict, referring to them as “real refugees escaping from real wars”. Similarly, Bulgarian Prime Minister Kiril Petkov has told journalists: “These people are Europeans. [They] are intelligent, they are educated people. … This is not the refugee wave we have been used to, people we were not sure about their identity, people with unclear pasts, who could have been even terrorists. (…) There is not a single European country now which is afraid of the current wave of refugees.”

Even journalists have applied this double standard. Since the beginning of the Russian attack, several Western news outlets have made it explicitly clear that white Ukrainians matter more than any other displaced population, through the use of problematic and downright racist statements. According to one analyst on France’s BFMTV, “We’re not talking here about Syrians fleeing the bombing of the Syrian regime backed by Putin, we’re talking about Europeans leaving in cars that look like ours to save their lives”. “It’s very emotional for me because I see European people with blue eyes and blonde hair being killed”, Ukraine’s former deputy general prosecutor, David Sakvarelidze, said on BBC. On Britain’s ITV, a correspondent in Poland commented: “This is not a developing third world nation. This is Europe”, as if wars and suffering in poorer countries are more acceptable.

The worst part of the double standard is not even the narrative surrounding this new wave of refugees, but the fact that the same protections being offered to Ukrainians are being withheld from all other people fleeing the same territories and the same war. Indeed, third-country nationals from Africa and the Middle-East living in Ukraine—the same people who have been displaced twice—are the ones most discriminated against in their attempts to reach safety. The African Union and the Nigeria’s government expressed concern over reports of Ukrainian police stopping African nationals from boarding buses and trains, and Polish border guards refusing them entry to Poland. UNHCR has also reported on “challenges faced by some third-country nationals seeking to enter Poland”.

It should come as no surprise to see that certain frontiers remain impenetrable and murderous for those with certain citizenships. We have not yet solved the grim situation facing hundreds of migrants and asylum seekers stuck for months in freezing conditions in the woods at the border of Poland and Belarus, held in a Polish reception center in Wędrzyn, and currently on hunger strike to protest their prison-like conditions. With a new war unfolding at Europe’s doors and a changing Eastern European security environment, though, it is fundamental that nobody remains locked out, a pending case between borders. The protection of civilians in Ukraine must be a priority, but has to include all civilians affected. Protecting some civilians while intentionally leaving thousands of others in despair across the same set of borders is not a solution. To address any humanitarian crisis, all humanity involved must be prioritized.

Today is March 2nd, a week after the start of the war, and the European Commission is, for the first time in history, activating the Temporary Protection Directive, which grants immediate protection to people fleeing Ukraine—including non-Ukrainian nationals legally residing in Ukraine as well as asylum seekers—and gives them one-year residence permits and access to education, medical care, and the labour market. The Commission is also introducing operational guidelines suggesting that Member States cooperate and exchange information regarding reception capacities and the number of persons enjoying temporary protection on their territories through a “Solidarity Platform”.

The feelings of hope, relief, and satisfaction provided by such responsiveness towards the Ukrainian people, however, also entails a bitter realization. It proves that the EU holds the power to open its borders and set up exceptional measures to offer immediate protection, and possesses the willingness to cooperate and the consciousness that mobility is natural and must not be feared—when it wants to.