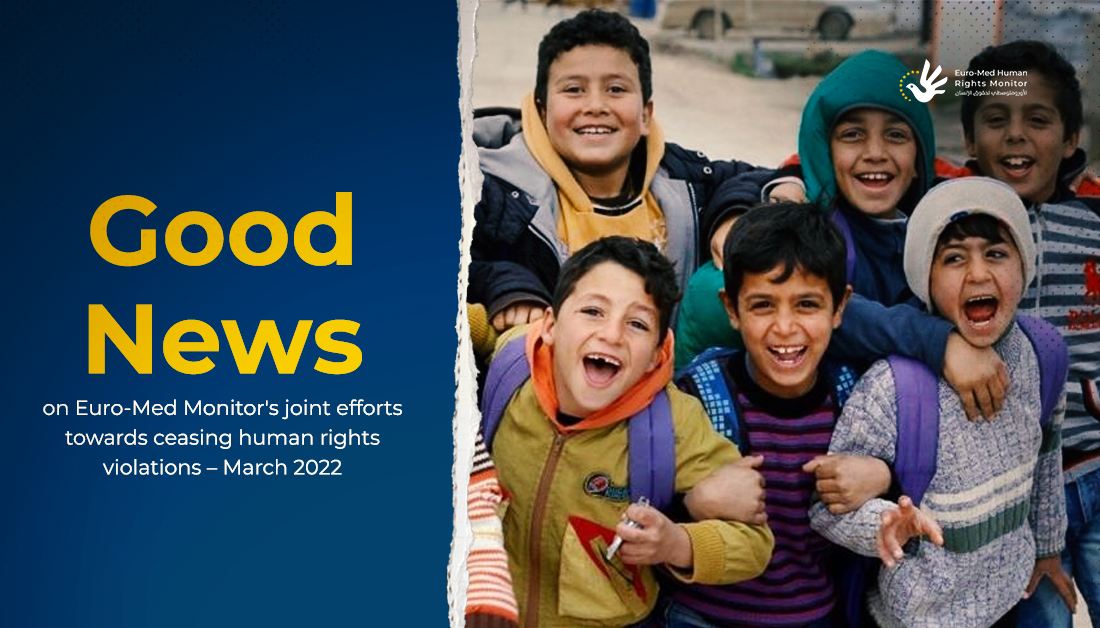 Since the beginning of the last decade, human rights violations have escalated in the Middle East and North Africa, as people took to the streets to protest against the dire political and economic conditions, and armed conflicts ravaged some countries. Governments in the region have used violent tactics to subdue and silence dissenting voices and systematically targeted political activists and journalists. In March 2022, repressive regimes continued to target peaceful activists and journalists, suppress popular protests, and restrict public freedoms.

In eastern Europe, the Russian-Ukrainian military conflict claimed the lives of hundreds of civilians and caused the displacement of millions of Ukrainians to neighboring countries. The crisis exposed discrimination and double standards by European politicians, officials, journalists, and celebrities, who called for embracing Ukrainian refugees because they share their ethnicity, color, and religion, unlike asylum seekers and migrants from regions outside Europe.

In March 2022, our team worked alongside partner organizations and dozens of regional and international organizations to generate real change by speaking to decision-makers about practices and methodologies that should be addressed, reformed, or abolished. We also harnessed the power of social media to virtually engage the public regarding issues that affect their individual rights and as well as human dignity as a whole.

On 2 March, the British House of Lords voted in favor of the Lord Dubs amendment to the Nationality and Borders Bill, which would open a new safe route for unaccompanied children in Europe to be reunited with their families in Britain.

Since the escalation of the migration crisis in 2015, Euro-Med Monitor has launched several campaigns to address the countries of destination of migrants and asylum seekers to provide them with protection and support, especially the most vulnerable groups such as unaccompanied children.

On 14 March, Italy's Constitutional Court decided to grant non-EU migrants, who have work permits and have been staying long-term in the country, the same family allowance as Italian citizens.

Over the years, Euro-Med Monitor has worked with partner organizations to shed light on the suffering of migrants and asylum seekers in Italy and Europe. We addressed the Italian authorities on more than one occasion to develop laws for the reception of migrants and asylum seekers, and grant them the rights they are guaranteed in relevant European and international laws.

Following his arrest, Euro-Med Monitor called on the Tunisian authorities to immediately and unconditionally release him, respect his parliamentary immunity, and refrain from using force to shun opponents and political opponents.

On 21 March, a Tunisian military judge ordered the release of lawyer Abdel Razzaq Al Kilani, after he was arrested on vague charges.

Euro-Med Monitor had called on the Tunisian authorities to release him immediately and unconditionally and respect freedom of opinion and expression.

On 30 March, the Algerian authorities released about ten prisoners of conscience who were detained for exercising their legitimate rights of expression and peaceful assembly.

Since the start of the popular movement in Algeria in 2019, Euro-Med Monitor has followed the security forces' violations against protesters and opposition activists, especially harassment and arbitrary detention. We have continuously addressed the Algerian authorities to release prisoners of conscience and respect the right of individuals to express their opinions freely.

On 11 March, the Saudi authorities released blogger Raif Badawi after he had been detained for ten years on charges related to freedom of opinion, expression, and belief.

In late March, the parties to the conflict announced a temporary truce to make way for political efforts.

Over the years, Euro-Med Monitor has addressed the parties to the conflict in Yemen and the relevant UN agencies for an unconditional cessation of military operations. We have also called for intensifying humanitarian response efforts to improve the humanitarian situation of millions of Yemenis who are one step away from starvation.