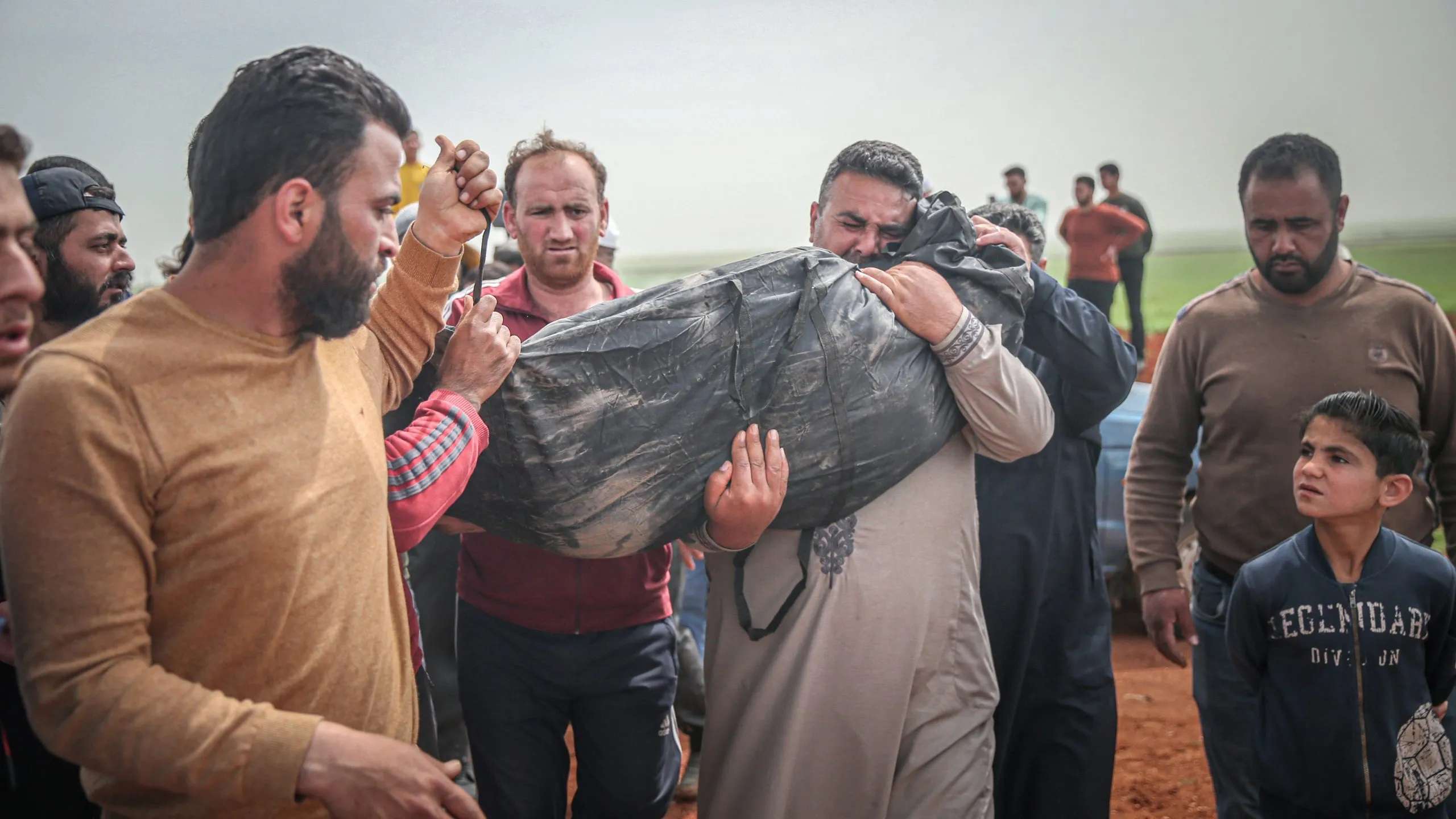 A photo of the funeral of the four children who were killed by the Syrian regime's bombing of the town of Maarat al-Na'san in the Idlib countryside, northern Syria (Twitter)
05 Apr 2022 Syria
Share On Copied
AR

Geneva – The relevant United Nations bodies and the international community share a large part of the responsibility for the Syrian regime's continued human rights violations, including the recent killing of four children in the Idlib countryside on Monday, Euro-Mediterranean Human Rights Monitor said in a statement.

The Syrian regime forces have targeted the town of Maarat al-Na'san in the Idlib countryside, northern Syria, with a number of heavy artillery shells, killing four children and wounding others as they were on their way back from school.

Euro-Med Monitor viewed photos published by local activists showing that the shrapnel hit school children's bags and books, indicating that the shells fell directly or very close to the children’s whereabouts, targeting indiscriminately without any justification, which may amount to a war crime.

According to the White Helmets (Syrian Civil Defense), the Russian and Syrian forces and allied militias launched 130 air and artillery attacks during the first quarter of this year on northwestern Syria. These attacks targeted civilian homes, public buildings, and service facilities, killing 47 people and wounding more than 100 others.

Achieving justice for the victims in Syria is still largely possible, but this requires an international will and setting aside all that stands between these parties and human values ​​and holding the perpetrators of violations accountable.

Influential international parties applied a double standard when they condemned the Russian operations in Ukraine and imposed severe sanctions on Russia but ignored taking decisive positions towards the Russian military operations in Syria, which have killed and injured more than 12,000 Syrians since 2015.

Legal researcher at Euro-Med Monitor, Youssef Salem, said: "Bombing civilian areas is a clear violation of the rights of protected groups in armed conflicts, as international humanitarian law absolutely prohibits targeting civilians, and Article 38 of the International Convention on the Rights of the Child states that 'States Parties shall take all feasible measures to ensure protection and care of children who are affected by an armed conflict.'"

"During the years of the conflict, the Syrian regime was not satisfied with ignoring the necessary measures to protect children, but also practiced serious violations against them that may amount to war crimes and crimes against humanity, including killing, maiming, torture, enforced disappearance, and forced conscription."

The relevant United Nations institutions and the international community should make a real shift in their handling of human rights violations in Syria, launch serious and organized efforts to hold Syrian officials accountable for possible war crimes, and impose real sanctions that undermine the ability of the Syrian regime to continue its illegal practices humanity.

Efforts to hold perpetrators accountable in Syria through the principle of universal jurisdiction adopted by national courts in Europe should be supported, and lawsuits should be filed before those courts against those suspected of participating in the assault on the lives of Syrian civilians or causing them in any way of suffering.