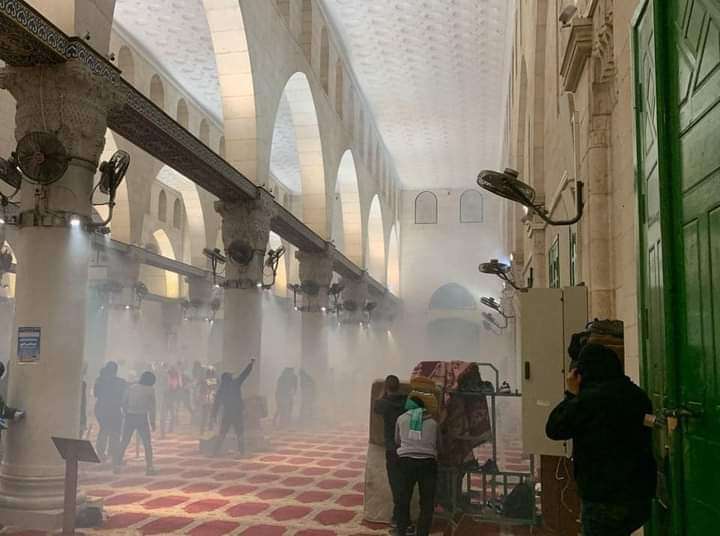 Geneva - Israeli forces have significantly escalated the killing and repression of Palestinians in the West Bank and East Jerusalem during the past several days, following a green light from the political officials in Israel, Euro-Med Human Rights Monitor said.

Euro-Med Monitor's field team documented the killing of 18 Palestinians in the first half of this month, most of whom were killed following statements by Israeli Prime Minister Naftali Bennett on 8 April, granting a mandate to the Israeli army to wage an unrelenting war on what was he described as terrorism.

The violence of the Israeli forces extended to Al-Aqsa Mosque this morning, as large forces of the Israeli police stormed the mosque's courtyards and violently attacked worshipers inside, injuring more than 150 Palestinians arresting 400 others.

The Israeli forces' decision to storm the Al-Aqsa Mosque and the unjustified attack on the worshipers inside it reflects the recklessness of decision-makers in Israel and an apparent desire for escalation. This behavior may have severe repercussions on the stability in Jerusalem and throughout the Palestinian territories. It happened in May of last year.

Euro-Med Monitor documented the killing of 47 Palestinians, including eight children and two women, by Israeli forces in various incidents since the beginning of 2022, including 5 in January, 6 in February, 18 in March, and 18 in the first two weeks of April. This number represents nearly five times the number of Palestinians killed by the Israeli army in the same period last year, which amounted to 10.

The authorization of the Israeli politicians for the army and security to operate with "full freedom to defeat terrorism" seemed to have paved the way for the unjustified excuse to kill and abuse Palestinian civilians at military checkpoints and in the cities, villages, and towns of the West Bank and East Jerusalem.

The Israeli politicians bear full responsibility for the killings of Palestinians, especially those unarmed women and children killed in cold blood without posing any threat to the lives of Israeli soldiers.

Euro-Med Monitor's statement linked the increase in killings against Palestinians this year to the new instructions for the shooting policy approved by the Israeli army on 20 December 2021, which gave the green light to soldiers in the West Bank to open fire on Palestinian youths who threw stones and Molotov cocktails.

The Israeli Prime Minister Naftali Bennett had welcomed these amendments, saying that they would "allow the soldiers to defend themselves."

Although the Israeli army policy of shooting was already flexible and often led to killings against Palestinians without any justification or proportionality, the new instructions made pulling the trigger an easy matter for the soldiers, in light of the presence of a supportive official decision and procedures that protect them from any accountability.

Euro-Med Monitor said that among the Palestinians killed, 29 people, including seven children and two women, were killed in shootings without any justification or involvement in any incidents related to the killing, translating into the policy of excessive use of force that the Israeli forces have been practicing against the Palestinians.

At least eight field executions were recorded under the pretext of suspicion or attempted stabbing, as the Israeli army left all the victims to bleed to death. The injured were not provided with any first aid in flagrant violation of the rules of international humanitarian law.

Six people were also killed in two assassinations (extrajudicial executions) in Nablus and Jenin. Six others were killed during armed clashes that followed the Israeli forces' storming of Palestinian cities in the West Bank. Only five people were killed while carrying out attacks against Israelis in Beersheba, Hadera, and Tel Aviv.

Euro-Med Monitor stresses that the Israeli persistence in using lethal force against civilians is an inevitable result of the absence of internal accountability in Israel and of the policy of the international community, which allows Israel to get away with violations every time.

Euro-Med Monitor calls on the United Nations mechanisms and bodies concerned with urgent action to protect civilians in the Palestinian territories and take serious steps to ensure accountability for the horrific murders committed against them.

Euro-Med Monitor also calls on all concerned parties to immediately intervene to stop the Israeli attacks, especially in Al-Aqsa Mosque, and not allow the Israeli government to continue committing extremist acts that may lead to an escalation in other areas.