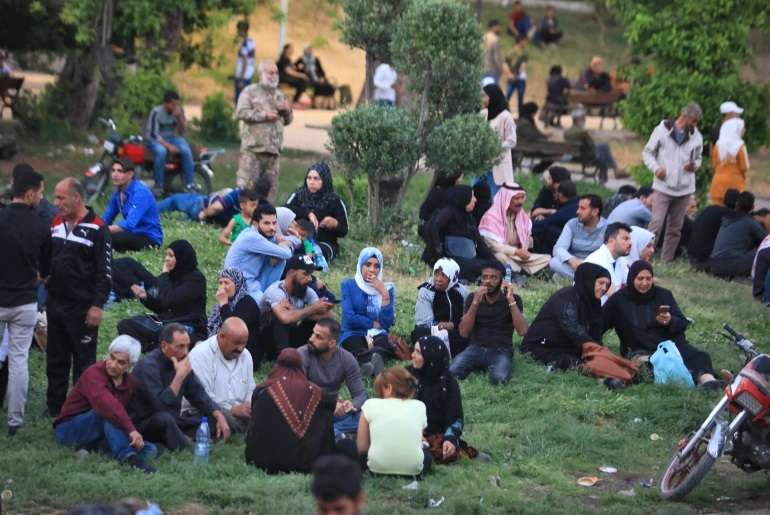 Crowds of families and relatives of detainees waiting for the arrival of the released detainees - May 5, 2022 (Social media)
07 May 2022 Syria
Share On Copied
FR | AR

At the end of last April, about two days before Eid al-Fitr, Bashar al-Assad presented a poisonous gift to the Syrians. He granted a general amnesty for those who committed terror-related crimes before 30 April 2022, excluding the crimes that led to death, as stipulated in the Counter-terrorism Law No. 19 of 2012 and the Penal Code issued by Legislative Decree No. 148 of 1949 and its amendments.

Thousands of families of detainees gathered in different regions in Syria, waiting for the return of their loved ones or any information about them or their conditions, restless to confirm their fate and as to whether they are still in prison or that the rumors about their executions are true.

The systematic use of arbitrary detention and enforced disappearance in inhumane conditions plague Syria, without any accountability for these practices and the accompanying torture. Especially for political prisoners who are held in intelligence branches or unofficial detention centers, where many died or have been extra-judicially executed.

Syrians lived this Eid shocked with the new updates on the files of detainees and forcibly disappeared persons. Feelings of hope and disappointment were mixed with uncertainty, especially since the regime did not release any official statistics or the names of the released prisoners. Rather, things took place in a humiliating and haphazard way. Some of the released have lost their memories, showing signs of trauma, and they did not have identification papers to pass checkpoints between cities or money for transportation.

Bashar al-Assad is one of the most prolific presidents in the Arab world to issue general amnesty decrees. Between 2011 and 2021, he issued about 20 amnesty decrees for convicts, according to the Robert Schuman Centre for Advanced Studies. However, these decrees were not a peace and forgiveness initiative for prisoners of conscience and political detainees, but mostly included specific groups of those convicted of misdemeanors, or non-terror-related crimes such as drug smugglers, murderers, or draft dodgers.

In other words, the regime excluded people who exercised their right to peaceful assembly and freedom of expression and opinion in 2011 or criticized the regime's policies and expressed a desire to reform and change it. It only offered amnesty to certain detainees to achieve several internal and external political and security interests. Most importantly:

First: The regime wanted to improve its image on the international level by delivering a humanitarian message, especially after issuing a law to “criminalize torture” a short time ago. This is intended to open the door for countries to normalize diplomatic relations with Syria to get out of its diplomatic and economic isolation, especially as Russia—Al-Assad's strongest ally—is in its war in Ukraine.

Second: Deluding countries hosting Syrian refugees that Syria is a safe place, and that migrant opponents can return to their homes, where there is a tolerant regime that observes the law in its policies and provisions.

Third: Releasing some detainees in a deplorable conditions, whose families were barely able to recognize them, sends a message about the government's willingness and ability to deal heavy-handedly with opponents or anyone who thinks of criticizing it. This sows fear among Syrians, which will push opponents and activists to remain silent for fear of being silenced in prisons and intelligence branches.

Fourth: Pumping money into the pockets of the security services responsible for detention centers and the judiciary, including security officers, lawyers, judges, and militias, by extorting the families of detainees financially in exchange for including the names of their relatives on the amnesty lists. The bribery process takes place without any guarantees or pledges that guarantee the release of the detainee. However, in a state of despair and uncertainty, the detainees’ families find themselves forced to follow the paths established and recognized by the regime, even if their results are unknown.

Granting presidential amnesty to only selected detainees doesn’t only serve the regime’s security and political interests and feeds its repression, corruption and intimidation-based approach, the procedure in itself does not grant the detainee his freedom as it is apparently portrayed. The detainee and his family will remain forever governed by fear of confronting the regime or resisting it, and even from practicing their lives normally because the security services are able to control them for life by keeping them under surveillance or summoning them for interrogation whenever they want.

Instead, the detainee isolates himself and avoids engaging in civic activities for fear of being detained again. And while some succeed at escaping abroad, others are denied the right to travel or arbitrarily denied a passport.

Furthermore, the continuation of arbitrary arrests and enforced disappearances in Syria is additional evidence of the falsity of this step and confirms the use of presidential amnesty to open the way for more violations to be committed and to intimidate citizens. For example, in 2021, the Syrian regime released 81 people under Decree No. 13 but arrested 176 others since then.

Therefore, the successive presidential amnesty decrees cannot be isolated from the regime's repressive policies over the past years. These decrees allow the regime to make gains from the file of detainees and forcibly disappeared persons, at the political, security, psychological, and economic levels, while the victims remain captive inside and outside prison, deprived of the right to hold the perpetrators accountable and achieve justice for them and their families.