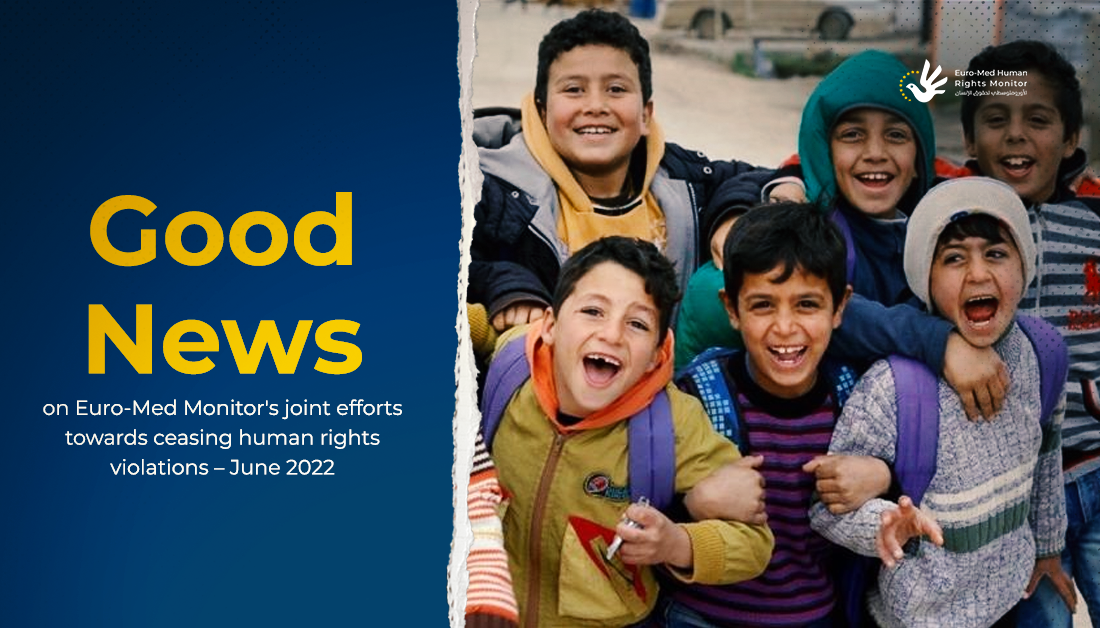 Since the beginning of the last decade, human rights violations have been escalating in the Middle East and North Africa. People have taken to the streets to protest against the dire political and economic conditions, and armed conflicts have ravaged some countries. Governments in the region have used violent tactics to subdue and silence dissenting voices, and have systematically targeted political activists and journalists.

In June 2022, repressive regimes continued to target peaceful activists and journalists, suppress popular protests, and restrict public freedoms. In Eastern Europe, the Russian-Ukrainian military conflict claimed the lives of hundreds of civilians and caused the displacement of millions of Ukrainians to neighbouring countries. The crisis exposed the discriminatory double standards of European politicians, officials, journalists, and celebrities, who called for embracing Ukrainian refugees because they share their ethnicity, color, and religion, unlike asylum seekers and migrants from regions outside Europe.

Last month, our team worked alongside partner organisations and dozens of regional and international organisations to generate real change by speaking to decision-makers about practises and methodologies that must be addressed, reformed, or abolished. We also harnessed the power of social media to virtually engage the public regarding issues that affect their individual rights, as well as human dignity as a whole.

Since the start of 2022, the Danish Refugee Appeals Board has reversed the decision of the Danish Immigration Service in 71 percent of cases in which Syrian refugees’ residence permits had been revoked, allowing them to remain in Denmark.

Following the initial decision to cancel the residence permits of Syrian refugees on the grounds that Denmark had become a safe area, Euro-Med Monitor called on Danish authorities to reverse their deportation decisions, and to continue granting residence and protection to Syrian refugees due to the continuing war conditions in Syria.

[Denmark’s designation of Syria as ‘safe’ is dangerous, inhumane, and illegal]

In June 2022, Saudi authorities released detainee Murtaja Al-Qurairis after eight years of imprisonment. He was arrested as a minor for participating in a demonstration in the Kingdom’s Eastern Province.

For years, Euro-Med Monitor, in cooperation with its partners, has implored Saudi authorities to release prisoners of conscience, and has launched a series of pressure campaigns to pressure them to stop the policy of arbitrary arrests, and to respect its citizens’ right to express their opinions freely.

The Yemeni government and the Houthi group agreed in June to extend the armistice in Yemen for an additional two months.

Over the course of years, Euro-Med Monitor—along with other human rights organisations—has addressed various parties in Yemen with the goal of stopping the armed conflict, neutralizing civilians from all military actions, and enabling relief organisations to work safely and freely in all regions of Yemen.